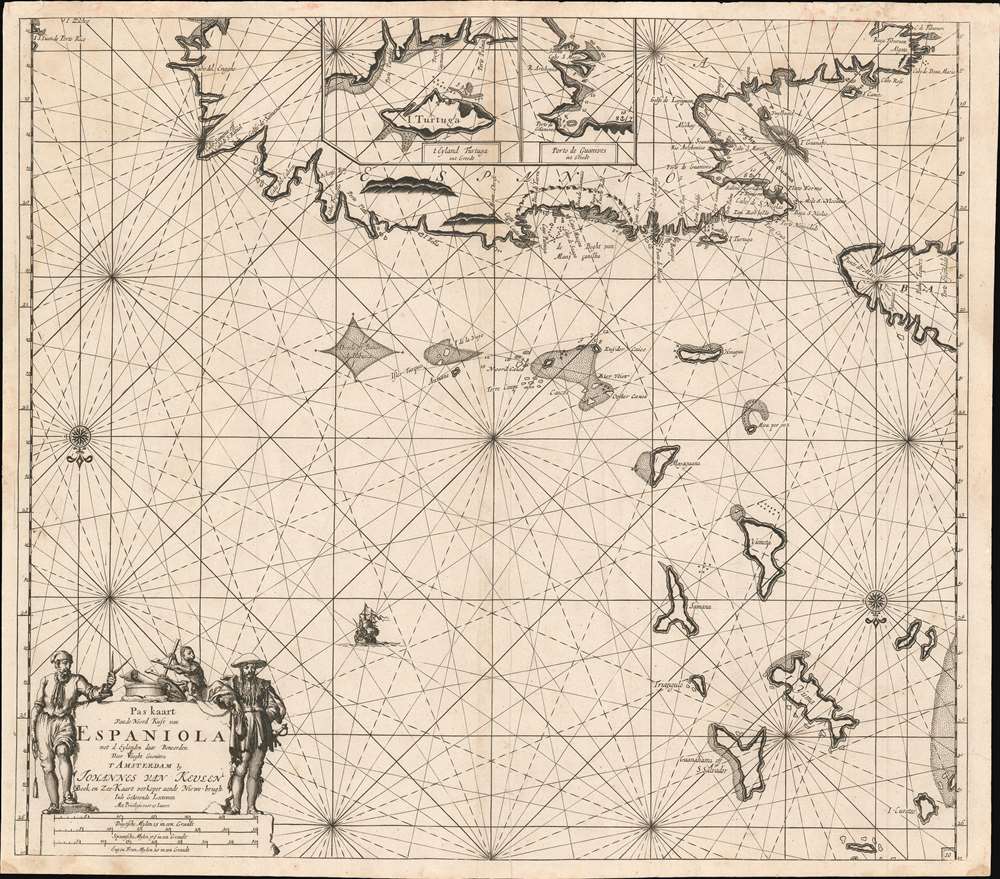 The Raiding Ground of Buccaneers.

A beautifully engraved 1684 nautical chart or maritime map of the north coast of Hispaniola, the east end of Cuba, the Turks and Caicos islands, and the southeastern reaches of the Bahamas. This southern-oriented chart depicts the heart of the raiding territory of the 'Brethren of the Coast', the buccaneers.

Sometimes, but by no means always with the license of the French, English, or Dutch, the buccaneers used their foothold in Hispaniola to prey on the Spanish at sea and on land throughout the Bahamas, and in Cuba. The Spanish drove most buccaneers were driven off Hispaniola by the 1630s, but they quickly reestablished themselves on the island of Tortuga just off the coast. (The island is here depicted at larger scale in an inset at the top of the map, as is the neighboring harbor of Guanives.) Thus, the heartland of Caribbean piracy is highlighted on this map, printed during what was still their golden age.

The chart is one of the very few to actually depict pirates (setting aside those bearing the image of Sir Francis Drake.) The bandanna-wearing sailor, looking sidelong at the viewer whilst displaying navigator's instruments and a plumb line, could arguably be a crewman on any vessel of his day; the dandyish, mustachioed swordsman standing opposite him can be nothing but a buccaneer captain.

Bad news for the navigator - a monkey appears to be about to make off with his cross-staff.

Also marked on this chart is the island of Guanahami, or San Salvador. This is reputed to be the first land in the New World sighted and visited during Christopher Columbus' first voyage, on October 12, 1492. It is worthy of note that the chart preserves the native Taíno name Guanahani as well as Columbus' appellation, San Salvador.

This map appeared at the height of the Golden Age of Caribbean Piracy (c. 1650 - 1730) when the Greater Antilles, Florida, and the Bahamas provided the most fertile hunting ground. Dutch pirates operating with the support of the Dutch West India Company dominated the 17th century until the rise of English piracy in the 1690s. Ultimately, the English (and many other) pirates began establishing themselves in the Bahamas, which were ideally situated to raid Spanish treasure galleons on en route from Havana to St. Augustine, their last stop in the New World before veering to open water for Europe. By early 1700s, Nassau had been declared a 'Pirate Republic' and more than 1,000 pirates had established themselves in the region.

Although Van Keulen's charts can generally be assigned dates based on typographical changes, this chart does not exhibit those and we have not observed state changes. This chart was introduced to the Van Keulen atlases in 1687, based on the presence of a single page number in the lower right corner in every example we have examined. We suspect this to be a c. 1695 issue of the map, despite there being only one page number rather than two, as appear in most later issues of Keulen charts. The location of the cartouche may have dissuaded the artist from adding the left-hand number block. OCLC only reveals six examples in institutional collections. Several examples of the chart have appeared at auction and in dealer's catalogues over the past ten years.