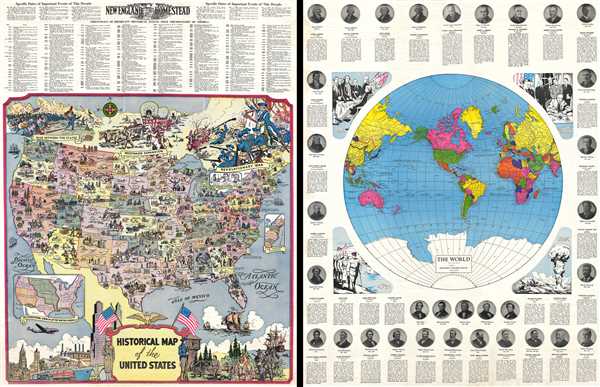 This is a 1959 R.L. McCollister pictorial map of the United States. The map depicts the continental United States from the Pacific Ocean to the Atlantic Ocean and from the Canadian border to the border with Mexico and the Gulf of Mexico. Illustrating the history of the United States from Ponce de Leon's arrival in Florida to Coronado's exploration of the Southwest in 1540 and the Pilgrims 1620 landing at Plymouth Rock in Massachusetts to the Wright Brothers first flight a Kitty Hawk, North Carolina, a rather comprehensive image of American expansion is presented. Events from the American Revolution, the Mexican-American War, the Civil War, and beyond are depicted in vignettes and labeled. The date when each state was incorporated into the Union are given along with key events in each state.

Around the map are several intriguing details. An 'inset' depicts three important invention in American history, Samuel Morse and the invention of the telegraph, Thomas Edison and the inventions of the light bulb and the phonograph, and Alexander Graham Bell and the invention of the telephone. Another inset map, along the right side in the Atlantic Ocean, illustrates the original thirteen colonies. An inset map, near the lower-left corner, presents the territorial growth of the United States, allowing for an understanding of how the United States achieved the feat of stretching from the Atlantic to the Pacific. At the top of the map, depictions of the Revolutionary War, including General Washington, the Westward Expansion, incorporating a covered wagon being pulled by oxen, and the War Between the States, presenting a charge of the Union Army, presents a striking visual representation of American history. Along the bottom border, the visual effects continue, from the arrival of the Pilgrims on the right, to the luxuries of modern American life on the left, featuring both steam and diesel train engines, a large ocean liner, a car, a bus, a Lockheed Super Constellation, and a soldier in uniform.

Above the map, a 'Chronology of Important Historical Events since the Discovery of America is included, with events dating from1492 until 1952. Above that list of events is another list of events specifically from the 1950s, which begin in 1951 and end in March, 1958.

On the verso, one finds a map of the world, which labels the U.S.S.R, French West Africa, Tanganyika, Rhodesia, and Yugoslavia, among others. Each country is shaded a different color to allow for easy identification. Around the border of this map, four vignettes depicting important moments in American history are presented. The first illustrates the signing of the Declaration of Independence, followed by General John J. Pershing leading the A.E.F. (American Expeditionary Forces) in WWI, Presdient Franklin Roosevelt signing the Declaration of War bringing the United States into World War II and the United States atomic bomb development. Forming the border of the verso are the portraits and short biographies of American presidents from George Washington to Dwight Eisenhower.

The map on the recto was created by R. L. McCollister and the map on the verso was copyrighted by the Geographical Publishing Company. The maps were published by New England Homestead Magazine in 1959.