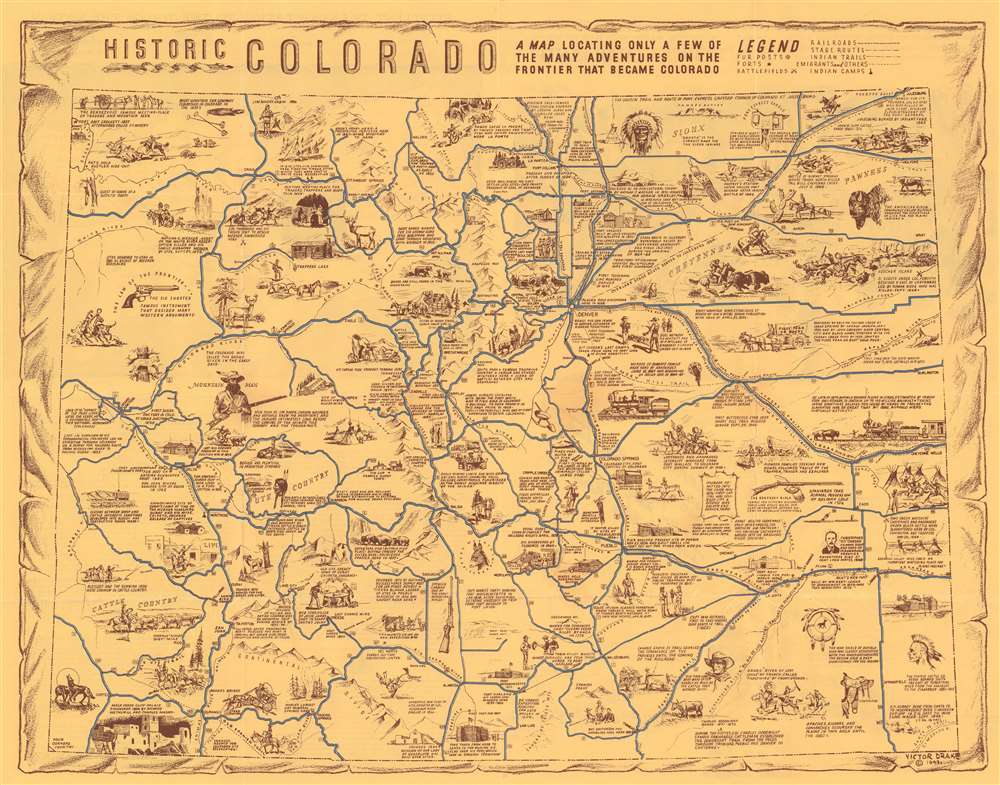 Highlights the heroes, villains, and martyrs of Frontier Colorado.

This is a 1942 Victor Drake pictorial map of Colorado tracing its frontier history. The map depicts the state from the Utah border to the Kansas and Nebraska borders and from the Wyoming border to the New Mexico border, although none of the neighboring states are identified.

Drake effectively captures the mystique surrounding Frontier Colorado, highlighting hostilities between the Native Americans and Federal forces; the gold, silver, and oil booms; and the heroes, villains, and martyrs that are still remembered, and in many ways celebrated, in American history. Battles between different Native American tribes and between Native Americans and Federal forces are referenced throughout. Some, such as the killing of Nathan Meeker, are referenced specifically, while others, like references to warfare between the Cheyennes and Arapahoes, are more ambiguous. Kit Carson's adventures through the state are noted in many different places (as is the fort where he died). Bat Masterson, the U.S. Army scout, lawman, and professional gambler makes an appearance for owning a gambling hall in Trinidad. Robert Ford, the gunman that killed Jesse James, was shot in Creede. Wyatt Earp and Doc Holliday are also referenced, since they awaited extradition to Arizona in Gunnison. Several ill-fated expeditions into the mountains are also noted. Gold, silver, and oil strikes dot the map. Not everything is completely serious however, even though the subject matter is. For example, a person that was lynched is referred to as the 'guest of honor at a neck-tie party', and 'the Law of the Frontier…the Six Shooter famous instrument that decided many Western arguments.'

This map was created by Victor Drake and published by the Colorado Hospitality Committee. Three examples are recorded in the OCLC as being part of the collection at the University of Michigan, the Denver Public Library, and the University of Colorado - Boulder.

Victor Hugo Drake (February 15, 1905 - September 25, 1987) was an American artist. Born in Atchison, Mississippi, Drake lived in Colorado and is known to have created at least one pictorial map of the state that was issued in at least two different formats by the Colorado Hospitality Committee. In 1940, when Drake registered for the U.S. Army Draft, he was employed by the Bradford-Robinson Printing Company. Drake married Audrey Louise Drake. Learn More...