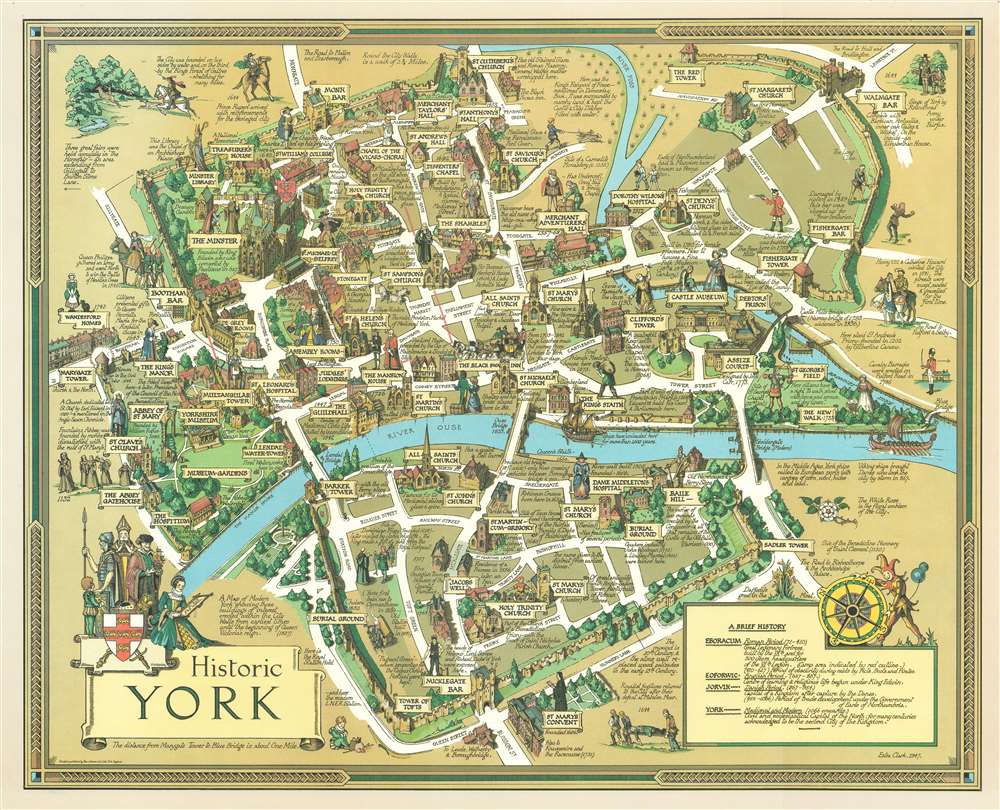 A stunning 1947 pictorial map of York, England by the New York artist Estra Clark. Oriented to the North East, this map illustrates central York between the River Foss (Browney Dyke) and the River Ouse. It focuses on York's mediaeval buildings, both those that remained in 1947, and those that were destroyed. Buildings are represented in vignette fashion, along with annotations, and illustrations of local personalities and characters from folklore. This is one of Clark's first, if not the first, published maps.

This map was drawn by Estra Clark and printed by Ben Johnson and Company of York. There seem to be at least two variants, one, as here in full color, and a 2-color variant.

Estra Clark (March 13, 1904 - 1993), born Estra Walker, was a York based English school teacher, commercial artist, and pictorial mapmaker active during the middle part of the 20th century. Clark was born in York and gave evidence of her artist gifts early on, winning a local prize at just 15. She went on to study at the London Royal College of Music. She must have switched to visual arts, as by the early 1920s she was attending the York School of Arts and Crafts. Estra became interested in pictorial cartography through a love of architectures and a fascination for the historic buildings of York. Her first map was likely a painting of Ryedale, completed in 1935, but is now alas lost. Her subsequent maps, most issued between 1947 and 1959, focus on York, Yorkshire, and the surrounding cities. Her clients included British Railways. She also completed several pictorial Biblical maps. Estra retired with her husband Isaac Clark to Poppleton, near York, England, in the late 1950s. Her last known map was issued in 1959. Learn More...