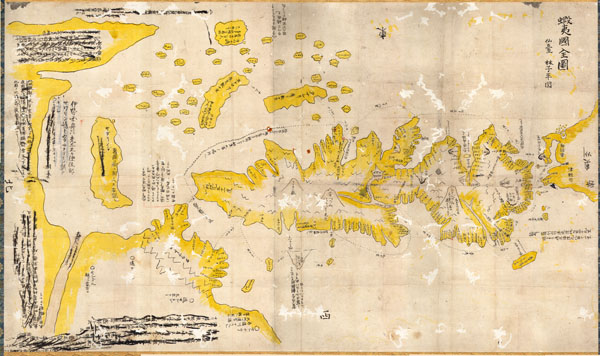 This is an unusual 1785 manuscript map of the island of Hokkaido by the Japanese cartographer Hayashi Shihei. Oriented to the east, Shiehi has drawn Hokkaido in an unusual form, elongated on the north-south axis, such that it is barely recognizable to our modern sensibilities. The islands at the top of the map are the Japanese Kuriles. The northern tip of Honshu appears to the right. Sakhalin appears twice, both an island to the left of the Hokkaido, and as Karafuto, here drawn as part of the Asian continent. Shihei based the map on material presented to the Shogun before the Ezochi expedition of 1785-1786 more formally mapped the region.

This particular example has much of its original annotations blocked out - though they are still readable - and is clearly an example of early Japanese censorship. Shihei issued this map without the permission of the central government and, moreover, the parent work was highly critical of the Shogun's international policy. As such, this, like most Shihei maps, was never formally printed, and was instead transmitted only in manuscript form - as here. Most likely the present example found its way into official hands and was amended and blocked out in accordance with the Tokugawa policy of isolationism.

Hayashi Shihei (August 6, 1738 - July 28, 1793) was a Japanese military scholar, political theorist, and retainer of the Sendai Domain. His name is sometimes misread (according to the Sino-Japanese reading) as Rin Shihei. Shihei was deeply concerned with the rise of western military and naval power. In particular he saw Russia's expansion into East Asia as a long term threat to Japanese sovereignty. He lobbied the Tokugawa Shogunate for a strengthening of Japan's defenses and advocated supplementing traditional Samurai training with courses in Western military science. In particular he expressed concerns with the traditional role of the samurai as an independent warrior and stressed teamwork exercises, or choren. He published several important books, including the 1791 Kaikoku Heidan (i.e. Discussion concerning military matters of a maritime nation and the 1786 Sangoku Tsuran Zusetsu (Illustrated Description of Three Countries). This later work included five important maps illustrating Japan, Korea, and the Ryukyu Islands, including Taiwan. Since his work was published without authorization from the bakufu (government), and criticized the Shogun's commerce with foreign powers, Hayashi fell out of favor. Most of his works were subsequently seized and, along with their original woodblock printing plates, destroyed. Consequently, most surviving examples of the five Shihei Maps are manuscript, copied by hand and handed down in secret from generation to generation. Eventually a copy of Sangoku Tsuran Zusetsu was taken to Siberia, translated into French, and published in Paris in 1832. Hayashi's legacy was thus preserved and, together with Takayama Hikokuro and Gamo Sanbei, he is remembered as one of the "Three Excelling Men of the Kansei Period" (Kansei no san-kijin).


Japanese cartography appears as early as the 1600s. Japanese maps are known for their exceptional beauty and high quality of workmanship. Early Japanese cartography has its own very distinctive projection and layout system. Japanese maps made prior to the appearance of Commodore Perry and the opening of Japan in the mid to late 1850s often have no firm directional orientation, incorporate views into the map proper, and tend to be hand colored woodblock prints. This era, from the 1600s to the c. 1855, which roughly coincides with the Tokugawa or Edo Period (1603-1886), some consider the Golden Age of Japanese Cartography. Most maps from this period, which followed isolationist ideology, predictably focus on Japan. The greatest cartographer of the period, whose work redefined all subsequent cartography, was Ino Tadataka (1745 -1818). Ino's maps of Japan were so detailed that, when the European cartographers arrived they had no need, even with their far more sophisticated survey equipment, to remap the region. Later Japanese maps, produced in the late Edo and throughout the Meiji period, draw heavily upon western maps as models in both their content and overall cartographic style. While many of these later maps maintain elements of traditional Japanese cartography such as the use of rice paper, woodblock printing, and delicate hand color, they also incorporate western directional orientation, projection systems, and structural norms. Even so, Japan's isolationist policy kept most western maps from reaching Japan so even 19th century maps appear extremely out of date. The early Japanese maps copy the great 1602 Chinese world map of the friar Matto Ricci. After Shiba Kokan's 1792 map, most Japanese cartographers used Covens and Mortier's 1730 copy of Jaillot's 1689 double hemisphere work as their base world-view. In 1862 Seiyo Sato based a new world map on Dutch sources dating to 1857, thus introducing the Mercator projection to Japan. By the late Meiji Era, western maps became far more common in Asia and Japanese maps began to follow modern conventions.

Very good condition. Map has undergone some very fine traditional Japanese restoration including mounting and backing. Some of the original text has been scratched out – the reason for this remains a mystery.