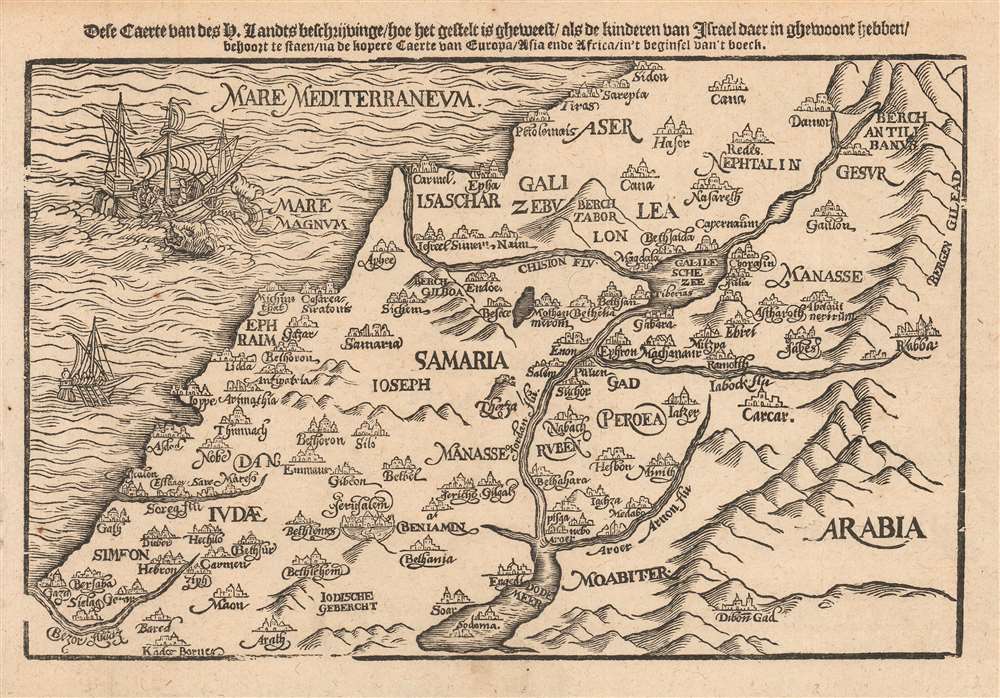 This is a scarce 1635 Dutch woodcut map of the Holy Land, presenting (as per the title) a 'map of the Holy Lands, describing how it was when the Children of Israel lived there.' The map depicts the location of present-day Israel, Palestine, and parts of Lebanon, Syria, and Jordan.

The Mediterranean coastline is mapped from Gaza in the south to Sidon in the north. The Jordan River, the Sea of Galilee, and the Dead Sea, extending to the Biblical Arnon River (Wadi Mujib), all appear. At the eastern extreme of the map are pictorial mountains separating the Holy Land from Arabia. Biblical cities and towns are copiously marked, and the regions of the Tribes of Israel are labeled. The Mediterranean is decorated with fine sailing ships, one of which is menaced by a whale as a passenger - the Prophet Jonah - is thrown overboard to placate it.

This woodcut appeared in a 1635 Matthias Hasaert Dutch edition of Heinrich Bünting's Itinerarium Sacrae Scripturae, a paper pilgrimage to the Holy Land first printed in 1581. Its popularity kept it in print into the 18th century. Later examples appear to come from a separate block. The formschneider is unknown. There are seventeen examples of the Hasaert-published Bünting Itinerarium listed in OCLC. There are no examples of this map cataloged in institutional collections.

Heinrich Bünting (1545 – 1606) was a Protestant pastor and theologian. He was born in Hanover, and studied theologian Witemberg. He is best known for his book of woodcut maps titled Itinerarium Sacrae Scripturae (Travel book through Holy Scripture) first published in 1581. It was the first complete summary of biblical geography available. Learn More...

Very good. Light toning at edges, else excellent with a bold strike.