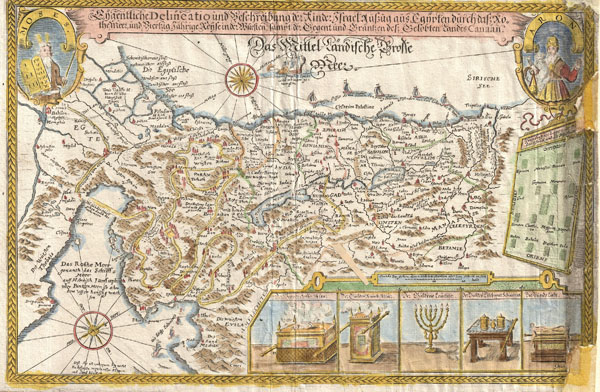 An extremely rare plan of the Israel, Palestine, or the Holy Land issued in Wittenberg, Germany, around 1670 for Martin Luther's Protestant translation of the Bible. This rare Bible contained several early maps of the Holy Land drawn by Georg Andreas Bockler. All examples of Bockler's work are extremely rare and are almost always, as in our example, exhibit condition issues. This particular map depicts the region with a westward orientation, with Egypt appearing on the right, the Mediterranean at the top of the map, and the Red Sea to the South. Portraits of Moses and Aaron appear in the upper left and right quadrants. Jonah and the Whale appear in the Mediterranean, as do a caravan of ships transporting Lebanese cedar for Solomon's Temple. The primary focus of this map is the winding path from Egypt to the Jordan River attempts to illustrates the wandering of the Israelites following the Exodus. Images of Temple relics and other Judaica, including the Arc of the Covenant, appear in the lower right quadrant.

Average. Right edge exhibits some old restoration and discoloration. All margins narrow.
Looking for a high-resolution scan of this?