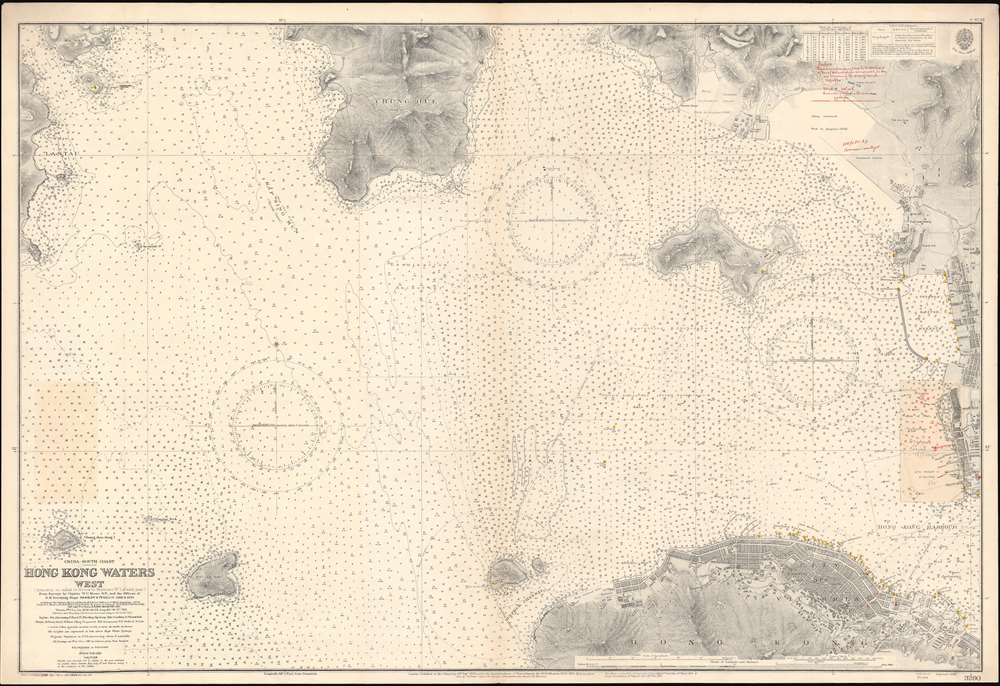 This map is noteworthy for being one of the few nautical charts of Hong Kong to exhibit extensive detail regarding the urban development of Hong Kong Victoria and Kowloon. In Hong Kong it notes land reclamation projects in Central and in Sai Wan, both then at the limits of the urban development. The map identifies factories, government offices, civil facilities, the Queen's College, the cricket grounds, markets and military instillations. One site 'APC' is identified in red manuscript, possibly 'Asia Pacific Cargo.' A pier has been added in Kowloon. A manuscript note suggests that the buoy locations of the west of the Man of War anchorages are incorrect.

This chart was originally published in 1903 under the title Hong Kong Harbour - West. The chart name changed in 1920 to the present Hong Kong Waters West. It is based upon original survey work completed by the Royal Navy under Captains W. U. Moore and Morris H. Smith, and Lieutenants P. L. Hancock an F. A. Reyne. The original survey work was completed between 188 and 1893, with update surveys completed in 1902 and 1911. The present example exhibits minor updates to 1929, as well as a pastedown containing manuscript revisions and annotations to about 1930. Represents Admiralty chart no. 3280.

A scarce item. We have identified examples in the British Museum and the Hong Kong Maritime Museum. It does not appear in the OCLC. No other examples in any edition are known.