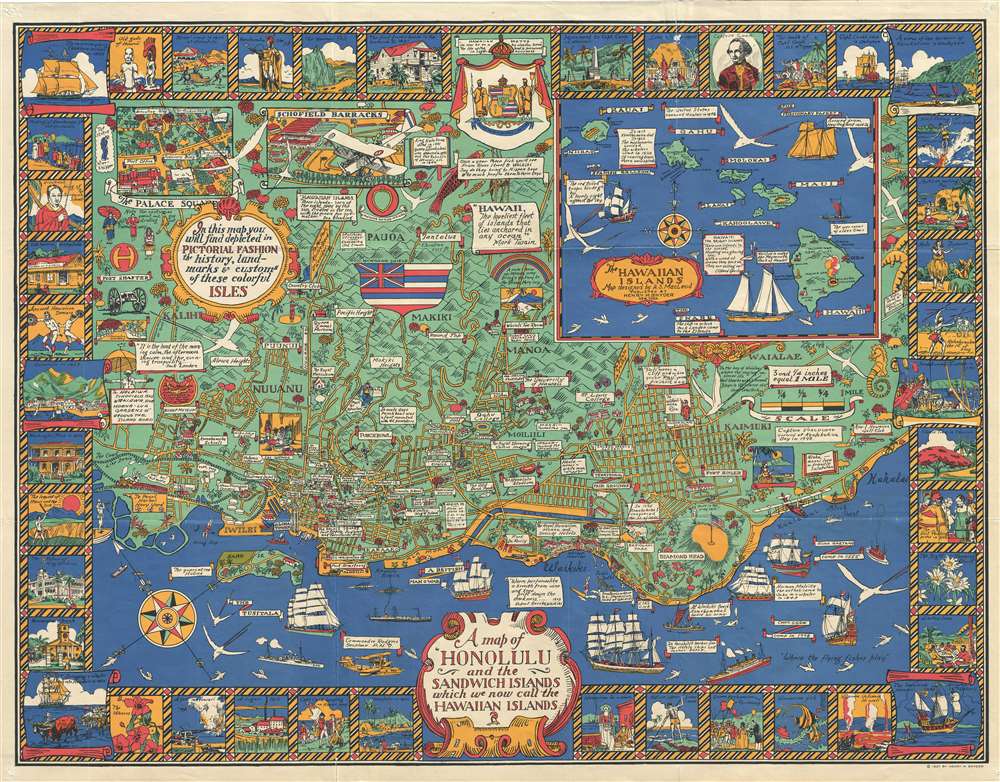 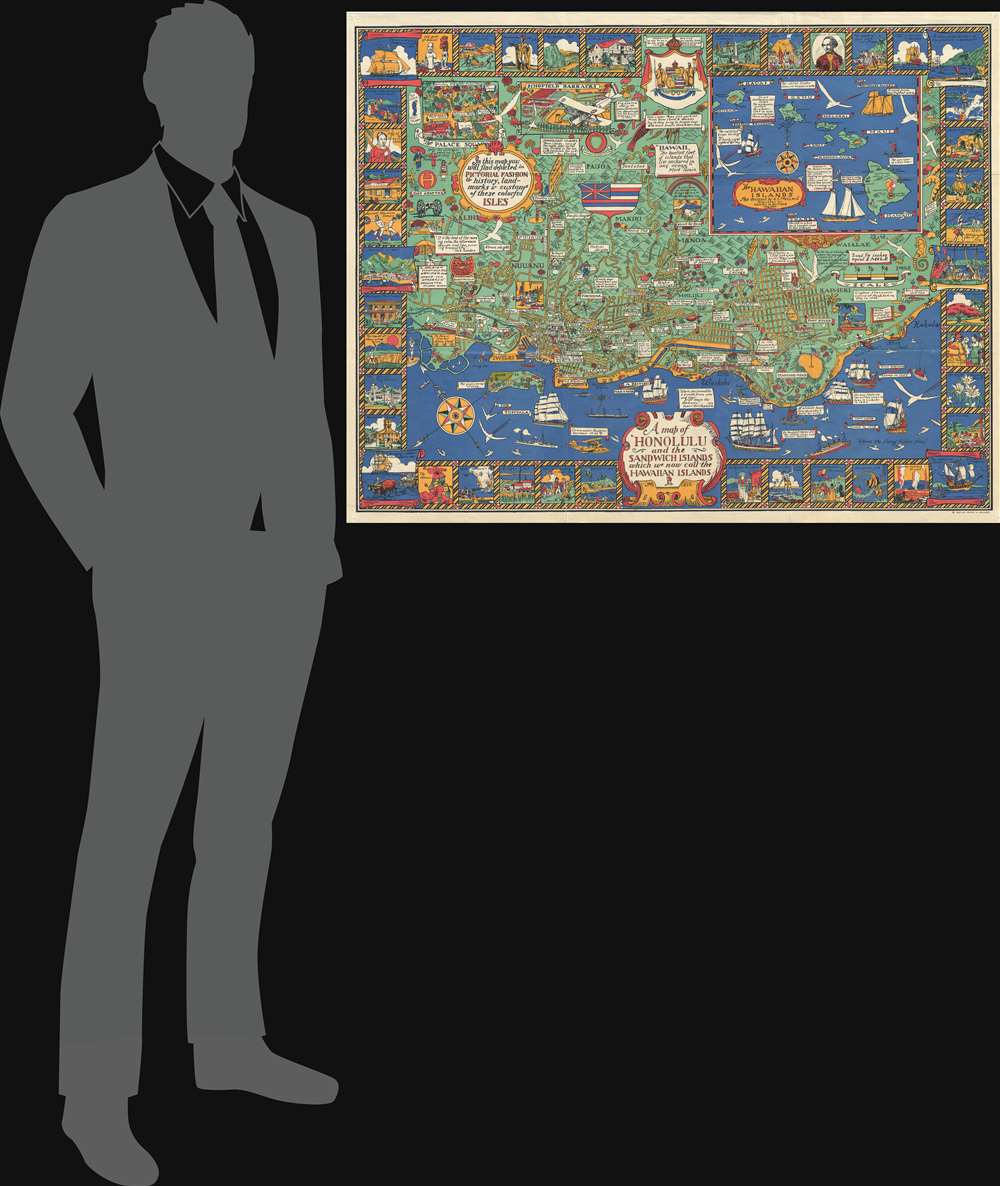 This is a whimsical 1927 Alexander Samuel MacLeod pictorial map of Honolulu, Hawaii, issued during the Golden Age of American Pictorial Maps (c. 1920 - 1960). The map, in its own words attempted to depict 'in a pictorial fashion the history, landmarks, and customs of these colorful Isles.'

Centered on Waikiki, the map covers from the site of the Honolulu Airport, west to Waialae-Kahala, and extends inland as far as Pauoa. A smaller inset map in the upper right offers a general view of the Hawaiian Islands. In in the developed center of Honolulu, streets, public squares, important buildings, landmarks, and curiosities, such as the night blooming cereus hedge are noted. Beyond the street grid, MacLeod uses vignette images and banners to illustrate historical events, local legends, flora, fauna, and more. The map is further surrounded by a decorative border with vignette scenes related to Hawaiian history and culture.

Pictorial qualities have been common in cartography from at least from the 16th century, when publishers like Braun and Hogenberg incorporated view-like qualities and other pictorial elements into their famous city plans. Braun and Hogenberg, and similar cartographers, issued their town books to express, not necessarily the geography their subjects, but rather the 'essence' of the town/city. As mathematics and surveying principles became more advanced, travel increased, and the ability to translate 2 dimensional cartographic perspectives into an understanding of the actual world became commonplace, maps themselves transformed. This trend is a recognizable progression that evolved from the 17th to the 19th centuries. By the late 19th century most maps had become geographical tools that illustrated the region cartographically, but failed in the original raison d'être as expressed by Braun and Hogenberg, to illustrate a place's 'essence'. So, where a city map of 19th century Paris might provide a completely navigable presentation of the city, one could glean almost nothing of Paris' character. In the late 18th century, the first modern 'pictorial' style maps developed. These maps, like Tomas Lopez's 1788 map of Seville, attempted to provide both cartographic accuracy and pictorial elements that might convey the character of the city. In that case, Lopez incorporated pictorial vignettes to illustrate important buildings and monuments. This style became increasingly commonly throughout the 19th century and early 20th centuries, particularly for centers of commerce like London, Paris, and Rome, where they are often mass produced and referred to as 'monumental' maps. The style further evolved in the early to mid-20th century, when revolutionary cartographers and illustrators like MacDonald Gill, Jo Mora, Frank Dorn, Ernest Dudley Chase, and many others, combined vignette style illustrations, modern printing techniques, inspiration from Japanese printmaking and manga, and from clever satirical cartographers/artists like Fred Rose, to produce maps that once again focused on revealing the essence a place, usually, but not always, at the sacrifice of cartographic precision.

This map was drawn by Alexander Samuel MacLeod and was published in New York by Henry M. Snyder. MacLeod was likely inspired to prepare this map of Honolulu by MacDonald Gill's 1914 Wonderground Map of London. As far as we are aware, this is MacLeod's only map. Today it is scarce on the market and of considerable collectable interest.

Alexander Samuel MacLeod (1888 - 1956) was a Canadian painter and printmaker active in California curing the first half of the 20th century. He was born on Prince Edward Island, Canada. After moving to San Francisco, he continued his artistic training at the California School of Design under Frank Van Sloun. In 1921, MacLeod relocated to Hawaii, where he worked in the art departments of the magazine Paradise of the Pacific and the local papers, The Honolulu Advertiserand the Honolulu Star-Bulletin. By 1929, he had returned to Canada and resided there for ten years. Returning once again to Hawaii, MacLeod became the director of the graphic art department for the United States Army in the Pacific. In 1943, he published a book of Hawaiian prints, The Spirit of Hawaii, Before and After Pearl Harbor. MacLeod retired to Palo Alto, California, where he died in 1956. Learn More...