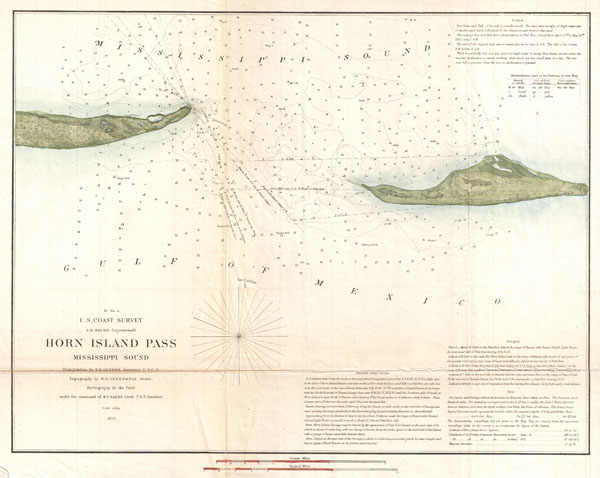 A very nice example of the U.S. Coast Survey's 1852 chart or map of the Horn Island Pass. Depicts the East End of Horn Island and the West End of Petit Bois Island with Horn Island Pass running between the two. Horn Island Pass offers an exceptionally valuable entrance to the Mississippi Sound and access to Pascagoula Bay and Harbor. Since this map was made a number of violent storms and other natural disasters have reshaped the topography of this region. There are countless depth soundings throughout with the best channel clearly marked just to the east of Horn Island. Detailed sailing instruction and notes on undersea dangers, times, and bearings in the lower right and upper right quadrants. Prepared under the supervision of A. D. Bache by. H. Gerdes, the Coast Survey's resident Gulf expert, W. E. Greenwell, and B. F. Sands. Published in the 1852 edition of the Superintendent's Report

Report of the Superintendant of the United States Coast Survey, (Washington) 1852.