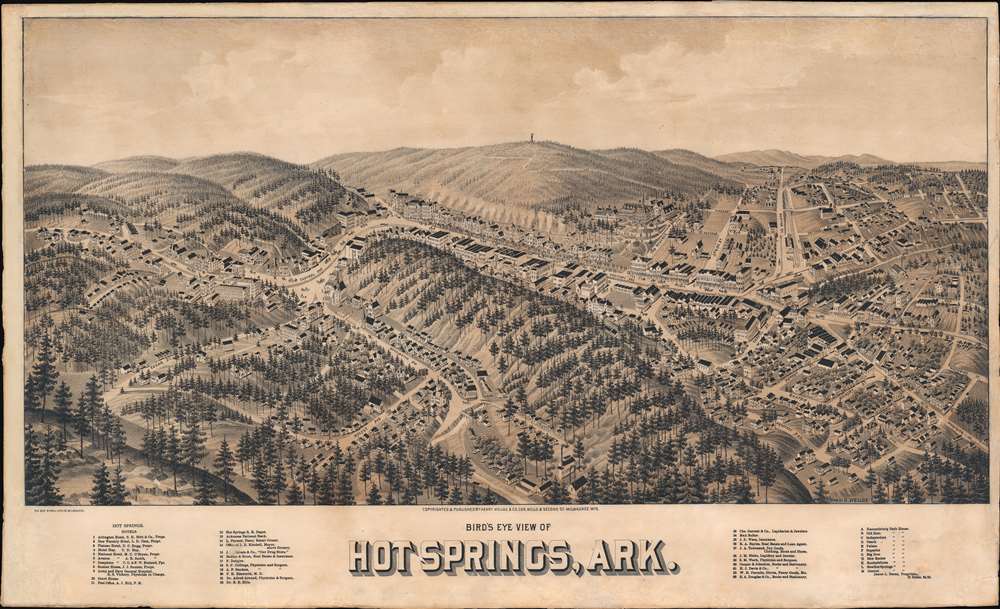 An exceptionally rare 1888 two-color chromolithograph bird's-eye view map of Hot Springs, Arkansas - arguably American's first national park and spa city. The view looks east on Hot Springs, possibly from a high point on nearby Sugarloaf Mountain - now part of Hot Springs National Park. Central Avenue, with its bath houses and grand hotels, cuts laterally across the page. Eleven bath houses are noted and keyed alphabetically in the lower right - curiously, they are lettered A-M, but 'I' and 'J' have been omitted. In addition, some 33 other locations, ranging from hotels to stationers and jewelers, are noted and keyed numerically. In the background, the wooden observation tower built in 1877 on top of Hot Springs Mountain by local mill owner Enoch Woolman is identifiable - this was replaced by the current metal tower in 1906.

Hot Springs, Arkansas is one of America's first resort cities. As one might guess, the city gets its names from mineral thermal springs that produce nearly one million gallons of c. 143°F water per day. The area was sacred to First Nations people who called it the 'Valley of the Vapors' and regarded as a neutral ground where even warring tribes could visit for healing. The conquistador Hernando de Soto visited the springs in 1541, claiming them in the name of Spain. In 1832, Andrew Jackson named Hot Springs the first 'Federal Reservation', essentially a national park, but predating the official creation of the national park system by nearly 40 years. By the late 19th century, Hot Springs transformed into an elegant resort city, with grand hotels, spacious bath houses, and fine restaurants - as seen here. On a darker note, during Prohibition, it became a haven for moneyed mobsters, who enjoyed the city's creature comforts and isolation. Al Capone, Frank Costello, Bugs Moran, and Lucky Luciano are just a few of the infamous criminals who regularly visited. Today, Hot Springs has been fully folded into the National Park System.

This view was drawn by Henry Wellge and lithographed in Milwaukee, Wisconsin, by Beck and Pauli. The view is exceedingly rare. We note one example at the Library of Congress. Reps notes a second example at the Amon Carter Museum of Western Art in Fort Worth, Texas. According to Reps, this is one of just 4 known bird's-eye views of anywhere in Arkansas, the others representing Little Rock (1871 and 1887) and Texarkana (1888).


Beck and Pauli (fl. c. 1878 – 1889) was a Milwaukee, Wisconsin based lithography firm founded in 1878 by Clemens J. Pauli and Adam Beck. The firm published hundreds of lithograph city views for many of the most prominent viewmakers of the period, including Lucien Rinaldo Burleigh, J. J. Stoner, Henry Wellge, Pauli himself, and others. The company was most active in the mid-1880 until about 1889, when the partners went separate ways and closed the company. Learn More...

Good. Exhibits older but excellent restoration on verso, including corner repairs and remargining. Warm even toning.