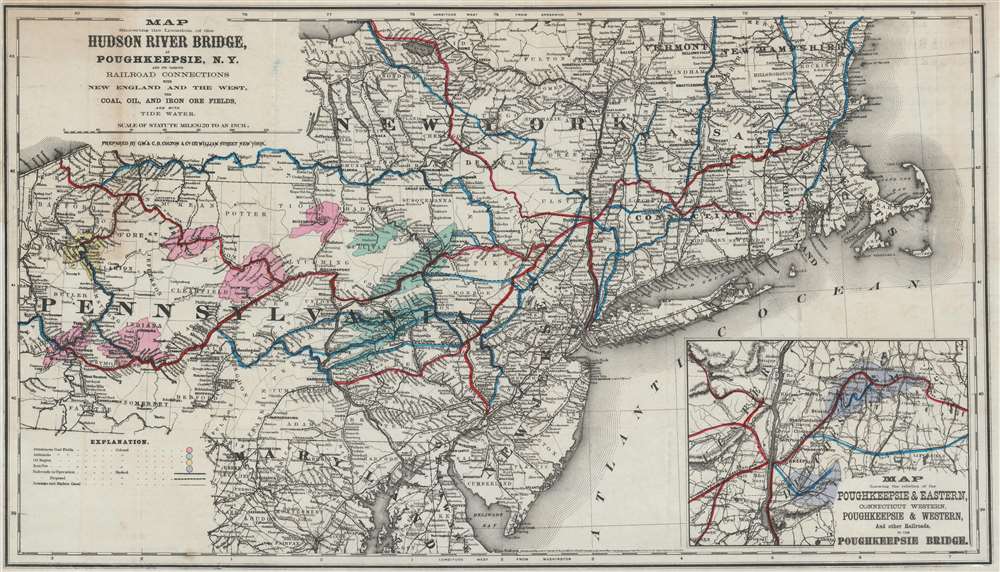 This is an 1870 George Woolworth and Charles B. Colton map of the northeast United States created to promote the construction of a Hudson River railroad bridge at Poughkeepsie, New York. Depicting the region from Erie, Pennsylvania to the Atlantic Ocean and from Oswego, New York to Washington, D.C., with a focus on the railroad network. Numerous regional railroad lines are illustrated, including the Hudson River Railroad, the Lackawanna and Bloomsburg Railroad, and the New Haven, Hartfield, and Springfield Railroad. Cities and towns along the routes are labeled, and distances provided. Proposed railroads are also included as dashed lines. An inset in the lower right focuses on the area immediately surrounding Poughkeepsie and the proposed bridge. The whole emphasizes the point that a bridge at Poughkeepsie would create a relatively straight journey from the coal fields in Pennsylvania to the urban centers of the East Coast. Here, the bituminous coal fields are shaded pink, the anthracite fields green. The oil region in western Pennsylvania is yellow and the iron ore regions around Poughkeepsie are purple.

Until the bridge at Poughkeepsie was built, there was no a bridge spanning the Hudson between Albany and New York City. Ferries and steamboats made the crossing at a handful of locations, but that forced railroads to unload their cargo and load it on a ferry, or simply embark the entire cars, to cross the river, which made the river crossing dependent upon the weather. The railroad bridge at Poughkeepsie was first proposed in 1868 in a letter published in the Poughkeepsie Eagle. At the time, the idea appeared so preposterous that the paper ridiculed it and thus the proposal was forgotten. It resurfaced in June 1871 when the Poughkeepsie Bridge Company was chartered. This company contracted with the American Bridge Company (not the same firm as the more famous later one), but the whole idea collapsed under the pressure of the Panic of 1873. Then, in 1886, the Manhattan Bridge Building Company was created to finance the project and contracted the United Bridge Company, who had recently completed the Niagara Cantilever Bridge, to build the one at Poughkeepsie. It was completed in 1888, and the first train crossed on December 29 of that year. The bridge opened for passenger service on January 1, 1889.

This map was created by George Woolworth and Charles B. Colton in 1870 and published by the Poughkeepsie Railroad Company in a booklet entitled Bridging the Hudson at Poughkeepsie, for a Short Direct Line, from New England to the Could Fields and From the West and the East for an all Rail Route, Saving from Eighty to One-Hundred Miles in Distance in 1871. One example is recorded in the OCLC and is part of the collection at the University of California Berkeley.