1969 Crabb and Shubb Humbead's Map of the World 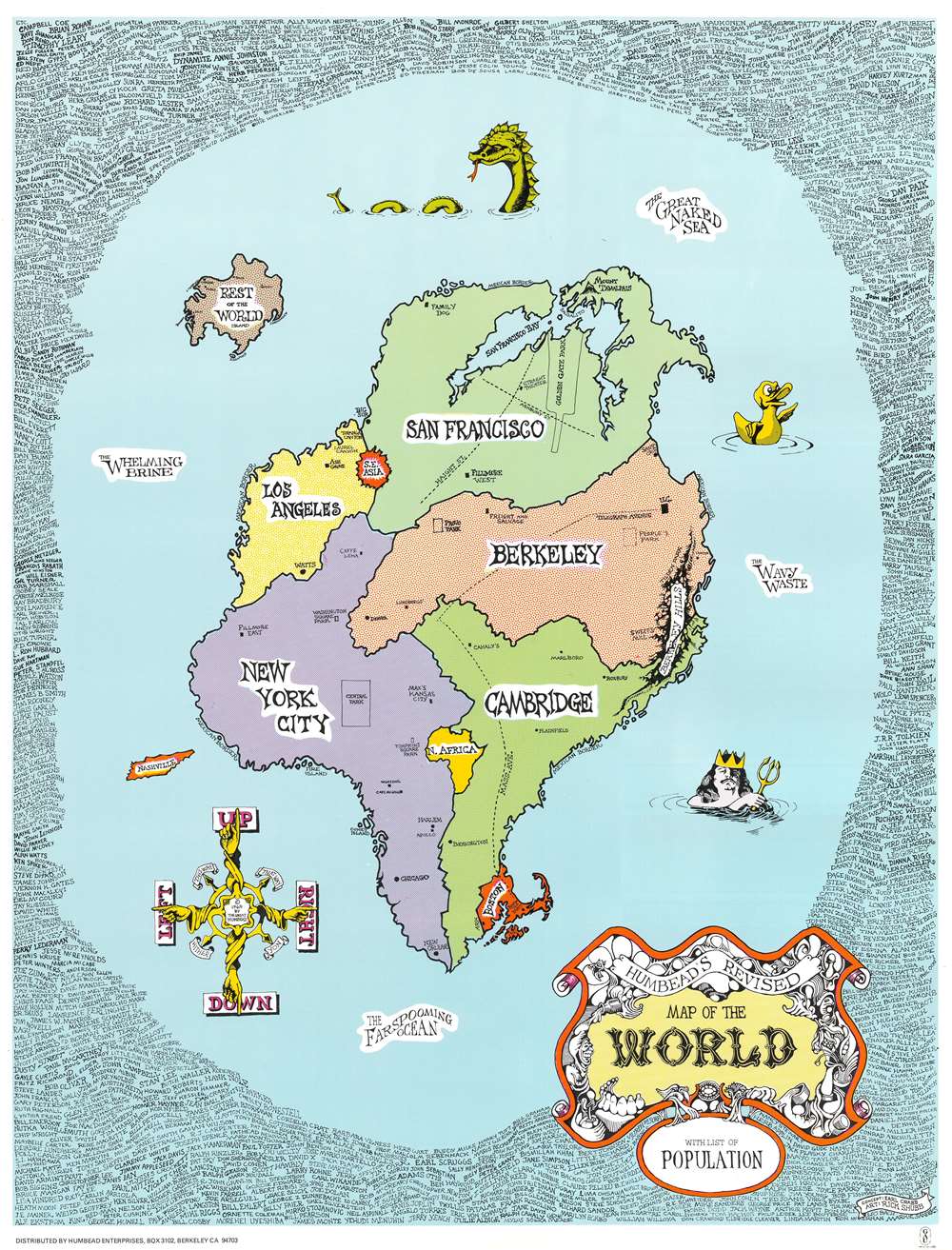 1969 Crabb and Shubb Humbead's Map of the World

This is an iconic 1969 Earl Crabb and Rick Shubb map of the world. Celebrated for its place in the history of the West Coast folk scene and the hippie counterculture, the map depicts a world reimagined from this perspective. San Francisco, Berkeley, Los Angeles, New York City, and Cambridge dominate one large continent, with Southeast Asia, North Africa, and Boston making up the rest of this landmass. Places within these cities are illustrated and labeled as well, adding some detail to the map. In San Francisco, for example, Golden Gate Park and the intersection of Haight Street and Ashbury Street are included, as is San Francisco Bay. In New York City, Washington Square Park, Central Park, Tompkins Square Park, and Café Au Go Go are included, with Fire Island and Coney Island illustrated off the coast. Harlem, Chicago, and New Orleans are dots on the map. Southeast Asia, situated between San Francisco and Los Angeles, is illustrated as a round red splotch, a reference to the bloody completely incomprehensible war in Vietnam raging at the time, while the entire continent of Africa is situated between Cambridge and New York City.

An ocean surrounds this large Pangea of a landmass and is labeled as 'The Whelming Brine', 'The Farspooming Ocean', and 'The Wavy Waste'. A rubber duck, Neptune, and a sea monster occupy this vast expanse of water, as does an island known simply as 'Rest of the World Island' which houses Rome, London, Paris, Moscow, Bombay, Delhi, Liverpool, Copenhagen, and Singapore. An island shaped like the state of Tennessee and labeled 'Nashville' floats off the coast of New York City, probably a reference to Nashville as the home of country music. A whimsical compass in the lower right corner provides directions, 'Up', 'Down', 'Right', and 'Left' are the cardinal directions, while 'This Way', 'That Way', 'Hither', and 'Yon' are noted in between. The whole is surrounded by a border made up of hundreds of names of celebrities of every sort, including Arlo Guthrie, Timothy Leary, Ray Bradbury, L. Ron Hubbard, Norman Mailer, Paul McCartney, William Burroughs, Earl Scruggs, Aretha Franklin, J.R.R. Tolkein, Ken Kesey, and Stan Lee just to list a few.

This map was created and published by Rick Shubb and Earl Crabb (Humbead) in 1969. Three different editions of Humbead's Revised Map of the World were published in 1968, 1969, and 1970. A well-known and celebrated piece of 1960s West Coast history, these maps are rare on the market today. The only known example in an institutional collection is part of the David Rumsey Map Collection at Stanford University. No records of the 1969 edition are catalogued in the OCLC.

Earl Crabb (September 6, 1941 - February 20, 2015) was an American artist, photographer, computer programmer, and jack-of-all-trades. Born in Le Sueur, Minnesota, Crabb graduated from William College in 1964 where he studied economics. A pioneering computer programmer, Crabb designed the first on-line banking programs for Bank of America and the first touch screen program for a Candian tourist bureau among other projects. He was a beloved figure of the 1960s traditional and folk music scene in San Francisco, where he was known as a photographer, producer, and organizer. From 1968 until his death, Crabb owned and operated Humbead Enterprises which created and published posters (including the celebrated 'Humbead's Revised Map of the World' which he created with Rick Shubb) and distributed books by David Goines. He was married to Giselle Shepatin. Learn More...


Richard 'Rick' Shubb (b. January 11, 1945) is an American inventor, musician, and graphic artist. Born in Oakland, California, Shubb began playing the 5-string banjo at the age of 14. He graduated from Oakland Technical High School in 1962. He soon began playing folk music in coffeehouses and taverns in Berkeley and San Francisco and played with celebrated musicians, including Doc Watson, David Grisman, and Jerry Garcia. He was also a charter member of High Country, one of San Francisco's most venerable bluegrass bands. Shubb invented the very popular guitar and banjo accessory the Shubb Capo, for which he holds the patent. He also holds several other U.S. and international patents on musical instrument accessories and improvements, including the lever-operated banjo fifth string capo and the compensated banjo bridge. Shubb is also known as a graphic artist. During the 1960s he drew posters for one of San Francisco's hip rock palaces, the Carousel Ballroom. A handful of his posters are included in the book The Art of Rock, considered to be the definitive work on rock posters. He also created the popular poster 'Humbead's Map of the World', which is regarded as an integral part of the folk-rock culture of the 1960s. Shubb is currently the owner and operator of his own company, Shubb Capos. Learn More...