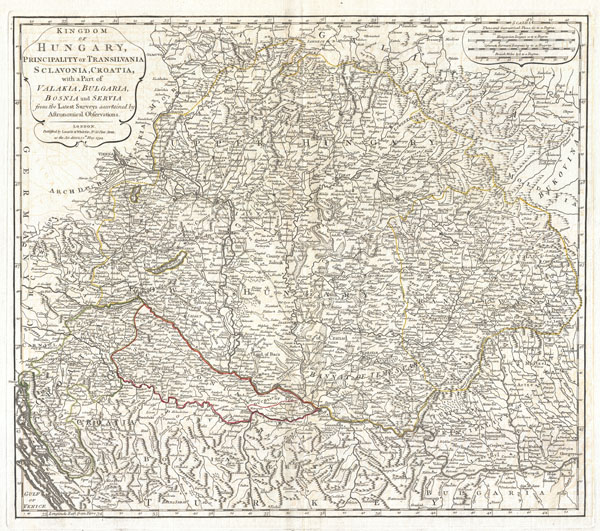 Kingdom of Hungary, Principality of Transilvania, Sclavonia, Croatia, with a Part of Valakla, Bulgaria, Bosnia and Servia from the Latest Surveys ascertained by Astronomical Observations.
1794 (dated)     19 x 21.5 in (48.26 x 54.61 cm)

An rare and attractive 1794 map of the Kingdom of Hungary by Laurie and Whittle. Covers the Kingdom of Hungary and its surrounding states, including Transylvania (modern day Romania), Bulgaria, Bosnia, Croatia, Serbia. Offers an extraordinary level of detail throughout, noting post roads, towns, castles, monasteries, forests, swamps, rivers, cities and mountains. A title cartouche appears in the upper let quadrant. Published by Laurie and Whittle as plate no. 23 in the 1797 edition of Thomas Kitchin's General Atlas.