1700 Kaerius Map of Japan and Korea as an Island 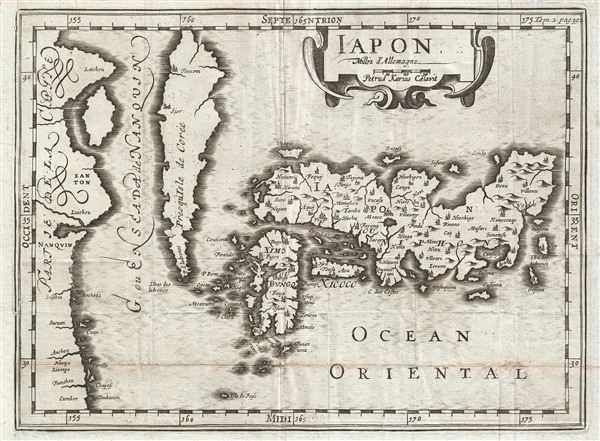 1700 Kaerius Map of Japan and Korea as an Island

Korea represented as an Island.

A rare map of Japan and Korea drawn by Johannus Cloppenburgh and engraved by Pieter van den Keere (Kaerius) in 1700. Cartographically this map is a reduced form Hondius' of Japan from the same period. This is second edition prepared for Martineau de Plessis' Nouvelle Geographie in 1700. There are a few notable differences between this edition and the 1630 edition prepared by Kaerius for the Atlas Minor. These include the removal of the IA in IAPONIA, the title of the previous maps. Remnants of the ‘IA' are still apparent in the title cartouche. There earlier variant also contained some descriptive text asserting that the cartographer was uncertain whether or not Korea was an island or a Peninsula. The cartographer seems to have erroneously resolved his doubts in favor of the insular theory and here identifies Korea as ‘PresquIsle de Coree.' Two cities, Sior and Tauxem (Pyongyang ? or Taedong?) are noted and, at the southern tip of Korea, the Ilbas dos Ladrones or ‘Islands of Pirate' are identified. In Japan, which follows the Hondius / Teixeira model some 40 cities are identified with the capital city of Meaco (Miyako, Kyoto) clearly represented.

Pieter van den Keere (1571 - c. 1646) was a Dutch engraver and cartographer active in London and Amsterdam in the late 16th and early 17th centuries. Keere, who is alternatively known as Kaerius or Coerius, was born in Gent, the son of printer and type founder Hendric van den Keere. Religious persecution in the Low Countries forced Keere, with many others, to take refuge in London, where they established themselves. There Keere married the sister of Jodocus Hondius, also a refugee in London, and it was most likely through Jodocus that he mastered engraving and mapmaking. Keere is responsible for numerous maps, most of which are associated with the Hondius firm. Some of his most notable works include numerous county maps of the British Isles that were later compiled into Camden's Britannia. Keere also engraved many of the maps included in the Jansson Atlas Minor.


Johannes Cloppenburgh (fl. c. 1610 - 1644) was a Dutch cartographer active in Amsterdam during the early 17th century. Cloppenburgh was associated with the Hondius Firm and is generally credited with the 1630 edition of the Mercator / Hondius / Jansson Atlas Minor. He is also identified on some map imprints as Cloppenburg, H. Jan Evertsz, and Johannes Everhardus. Cloppenburgh is a somewhat elusive figure of whom little is known. The cartographer should not be confused with the German theologian of the same name and period.


Martineau Du Plessis (fl. c. 1700) was a French geographer and schoolmaster from Fontenay, possibly Fontenay-le-Comte. He is best known for his multivolume geography, Nouvelle Geographie issued in 1700. Little else is known of his life.