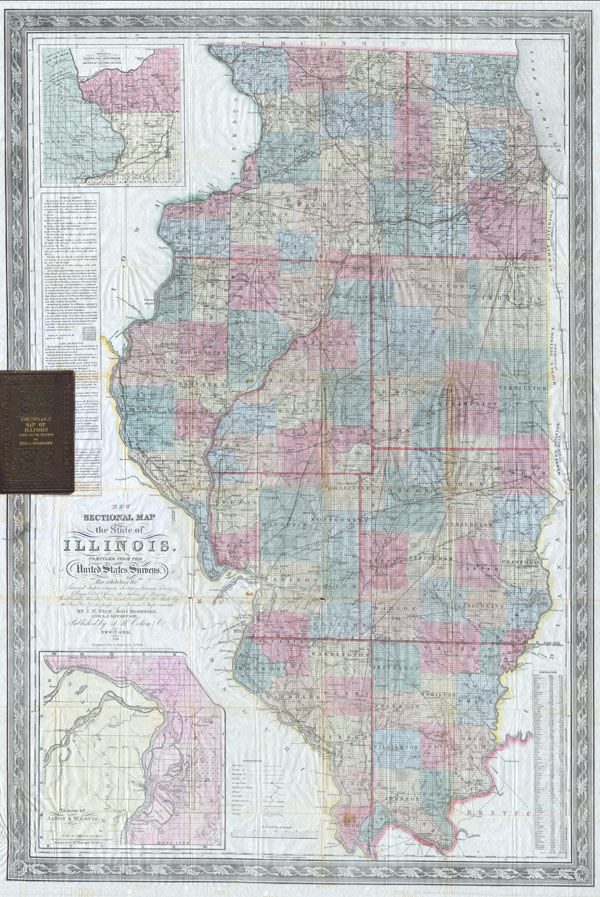 Colton's New Sectional Map of the State of Illinois. Complied from the United States Surveys. Also exhibiting the Internal Improvements, distances between Towns, Villages, & Post Offices: the outlines of Prairies, woodlands, Marshes & the lands donated to the State by the Genl. Govt for the purpose of Internal Improvement.
1852 (dated)     41 x 27.5 in (104.14 x 69.85 cm)

This is an extremely scarce 1852 pocket issue map of the state of Illinois by published by J. H. Colton and prepared by J. M Peck, John Messinger, and A. J. Mathewson. Depicts the whole of Illinois with inset maps of 'the vicinity of Galena, the Lead Region and part of Wisconsin and Iowa' and in the bottom left, the 'Vicinity of Alton & St. Lewis.' This example is surrounded by a lovely decorative border, and includes an extensive legend, distance scales, a table giving the populations of towns and villages, and a large table discussing Public Land and Land Districts. Included with this map is the original 4 x 6 gilt on leather binder. Paper label on inside front cover lists numerous maps available in both 'mounted and pocket form' from the publisher. Engraved by S. Stiles & co. of New York. Dated and copyrighted: 'Entered according to the Act of Congress in the Year of 1836 by J. H. Colton & Co. in the Clerk's Office of the District Court of the United States for the Southern District of New York.' Published from Colton's 172 William Str. Office in New York.

Very good. Wide clean margins. This map is in extraordinary condition given what it is, that is a folding pocket map. Paper is white and clean with minimal discoloration or damage on the folds. Original folds present, but easily removable, should someone choose to do so. An altogether extraordinary map in spectacular condition. Removed from original 4 x 6 in folder (included) for framing purposes.