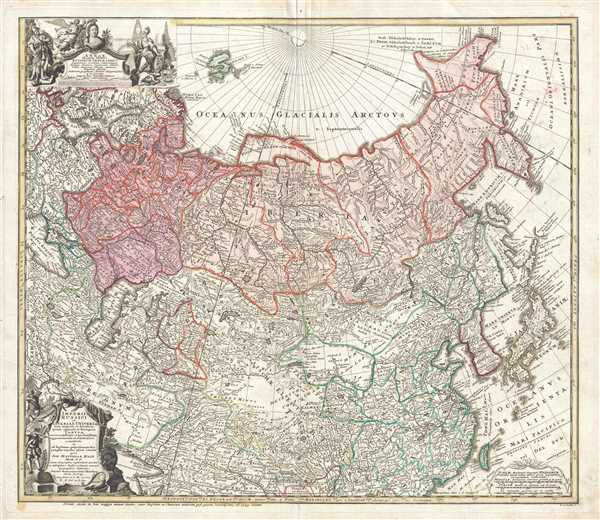 Includes an unusual depiction of Novaya Zemla along the northern coast of Russia.
$700.00

This is a 1739 Johann Matthias Hase and Homann Heirs map of Russia and Asia. The map depicts the region from Denmark, Norway, and the Black Sea to Japan and the Pacific Ocean and from the Arctic Ocean to India. Two intriguing cartographic missteps are illustrated here. The first is the depiction of Novaya Zemlya. Today, we know Novaya Zemlya is an archipelago in the Arctic Ocean off the northern coast of Russia, however here it is illustrated as a large peninsular protrusion. Evidently the southern coast of the islands had not yet been fully explored, thus Hase did not know that Navaya Zemlya was not connected to the mainland. Another landmass, ghosted in off the coast of Yeso, is labeled 'Terra Societatis Batavicæ'. Only the westernmost part of this region is illustrated, with the rest vanishing into the Pacific Ocean. This also was not an uncommon practice for cartographers during the 17th, 18th, and 19th centuries when they received information from explorer's reports, but it was inconclusive at best. Cartographers wanted to include the most up-to-date information, which meant that sometimes only a portion of a landmass would be included. Most likely the 'Terra Societatis Batavicæ' was one of the Kurile Islands that Maerten de Vries and Cornelis Jansz Coen charted during their 1643 expedition for the Dutch East Indiat Company. This is likely because the Straat de Vries is labeled just below the 'Terra Societatis Batavicæ', which was mapped by Vries and Coen. They were also the first European navigators to discover the forklike peninsulas of Sakhalin and map its coastline. Although, apparently the Castricum was mired in heavy fog as Vries and Coen attempted to explore these seas, leading to the inaccurate mapping of Hokkaido (Yeso) as a part of the Asian mainlain and not as a separate island.

A highly detailed map, myriad cities, towns, and villages are labeled, including Moscow, St. Petersburg, Berlin, and Peking. The Black Sea, Caspian Sea, and Aral Sea are all illustrated, along with numerous rivers and lakes. The Volga, Ganges, and Yangtze Rivers are among the rivers illustrated. A decorative title cartouche is situated in the lower left corner, while a cartouche bearing the map's dedication occupies the upper left corner. A cartouche containing the map's scale is included in the lower right corner.

This map was created by Johann Matthias Hase and published by Homann Heirs in 1739.

Johann Matthias Hase (January 14, 1684 - September 24, 1742) was a German cartographer, historical geographer, mathematician, and astronomer. Born in Augsburg, Hase was the son of a mathematics teacher, thus he found his love for mathematics early in life. He began attending the University of Helmstedt in 1701, where he studied mathematics under Rudolf Christian Wagner and then moved to the University of Leipzig to pursue a master's degree. He received his master's in 1707 and promptly returned to Augsburg to work as a teacher. However, he soon returned to Leipzig to serve as court master for two Augsburg patricians, where he became increasingly involved geography, astronomy, and cartography as adjunct to the philosophical faculty. Tase was recommended for the position of chair of higher mathematics at the University of Wittenberg by his former professor, Christian Wolff, in 1715. A position that Hase did not receive. He was, however, named a Professor of Mathematics at the University of Wittenberg five years later in 1720. It is unclear exactly when Hase began working for the Homann Heirs publishing firm. Even so, Hase created numerous maps for the firm. He was also a prolific writer, publishing several treatises on universal history.


Johann Baptist Homann (March 20, 1664 - July 1, 1724) was the most prominent and prolific map publisher of the 18th century. Homann was born in Oberkammlach, a small town near Kammlach, Bavaria, Germany. As a young man Homann studied in a Jesuit school and nursed ambitions of becoming a Dominican priest before converting to Protestantism in 1687. Following his conversion, Homann moved to Nuremberg and found employment as a notary. Around 1693 Homan briefly relocated to Vienna, where he lived and studied printing and copper plate engraving until 1695. Afterwards he returned to Nuremberg where, in 1702, he founded the commercial publishing firm that would bear his name. In the next five years Homann produced hundreds of maps and developed a distinctive style characterized by heavy detailed engraving, elaborate allegorical cartouche work, and vivid hand color. The Homann firm, due to the lower cost of printing in Germany, was able to undercut the dominant French and Dutch publishing houses while matching the diversity and quality of their output. By 1715 Homann's rising star caught the attention of the Holy Roman Emperor Charles the VI, who appointed him Imperial Cartographer. In the same year he was also appointed a member of the Royal Academy of Sciences in Berlin. Homann's prestigious title came with a number of important advantages including access to the most up to date cartographic information as well as the "Privilege". The Privilege was a type of early copyright offered to a few individuals by the Holy Roman Emperor. Though not as sophisticated as modern copyright legislation, the Privilege did offer a kind of limited protection for several years. Most all J. B. Homann maps printed between 1715 and 1730 bear the inscription "Cum Priviligio" or some variation. Following Homann's death in 1726, the management of the firm passed to his son Johann Christoph Homann (1703 - 1730). J. C. Homann, perhaps realizing that he would not long survive his father, stipulated in his will that the company would be inherited by his two head managers, Johann Georg Ebersberger and Johann Michael Franz, and that it would publish only under the name Homann Heirs. This designation, in various forms (Homannsche Heirs, Heritiers de Homann, Lat Homannianos Herod, Homannschen Erben, etc..) appears on maps from about 1731 onwards. The firm continued to publish maps in ever diminishing quantities until the death of its last owner, Christoph Franz Fembo in 1848.