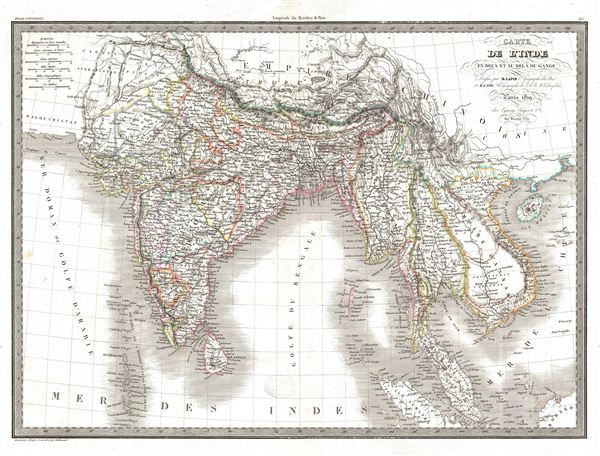 A fine first edition example of M. Lapie's 1829 map of India and Southeast Asia. The map covers all of what was once known as Greater and Lesser India, that is to say, all of modern India, Ceylon or Sri Lanka, Afghanistan, Bhutan, Nepal, Malaysia, Thailand (Siam), Burma, Vietnam (Annam), Laos, and Cambodia.

As this maps was printed, most of India had come under the British rule. India, long an exporter of manufactured goods, instead became supply house for raw materials to the British empire. The empire by this time started had also started initiating the non-economic programs for education, culture and social reform in the country. Most historians consider this to be the true beginning of India's colonial period.

This map was engraved by Armand Joseph Lallemand as plate no. 35 in the first edition of M. Lapie's important Atlas Universel. This map, like all maps from the Atlas Universel features an embossed stamp from the Lapie firm.