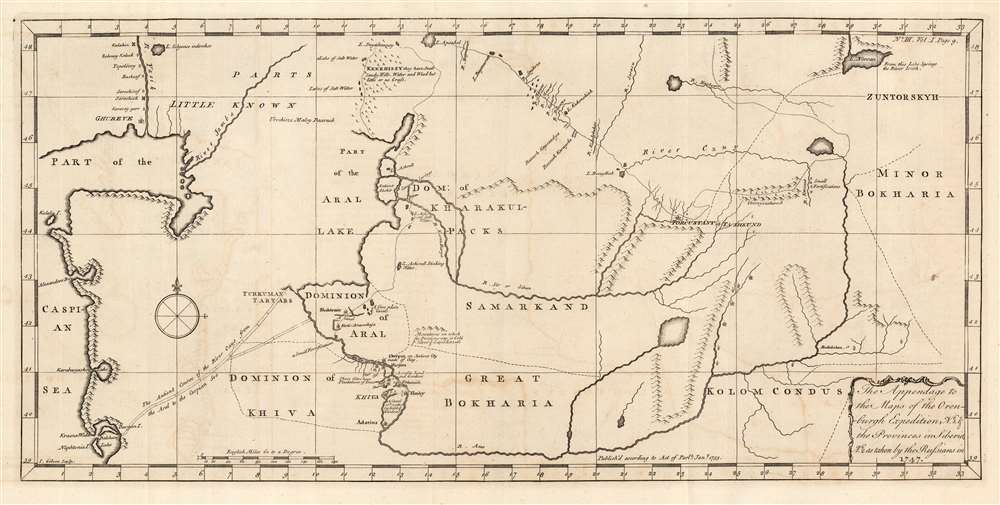 Russian mapping of their southeastern frontier.
$650.00

This fascinating map of modern-day Turkmenistan, Uzbekistan and Tajikistan, engraved by John Gibson in 1753, was based on Russian maps Jonas Hanway included in his An Historical Account of the British Trade Over the Caspian Sea. Hanway supplemented the results of his own travels to the Caspian with a multiplicity of travelers' journals and the maps of other explorers, compiling an exhaustive collection of the most up to date geographical sources for this area, which remained one of the most obscure regions in the world. The map is centered on the Silk Route capitals of Samarkand and Bukhara, east of the Aral Sea. The cities of Tashkent and Badakshan are shown; the northeastern Caspian Sea and the lower part of the Ural River appears at the west; the eastern shore of the endoheiric Aral Sea is shown as well, but the western shore and indeed all the land between the Caspian and the Aral Sea is obscure. (The nomadic Tatars occupying that region were notoriously ill disposed towards travelers.) The map excels in detailing the regions south and east of the Aral, which include cities having 'plantations of trees' and 'mountains on which the Persians say is Gold and Silver and Lapis Lazuli.'

Ivan Kirillovich Kirilov (Иван Курилов, 1689 - 1737), the father of Russian Cartography, took part in Shestakov's expedition to Kamchatka between 1731 and 1733. The experience led him to appreciate the economic and strategic opportunities offered Russia in assessing her more remote provinces. In 1734, he proposed the creation of an administrative center to aid the assessment and exploitation of Russia's southeastern frontier regions. The ambitious project called for the construction of fortresses and even cities in order to extend Russia's influence and the reach of her geographers. To this end, the city of Orenburg was constructed in the southern Urals in 1735, the site having been chosen by Kirilov himself. Specifically, his intent was '...opening up transit routes to Bukhara, Badakhshan, Bulk, and to India'. Kirilov died in 1737, but the bureaucracy he established lived on under new administrators. After several false starts, Orenburg was re-founded in 1743, at the juncture of the Yaik and the Sakmara rivers, its present location. From that time on, Orenburg functioned as both a military and administrative center on the Kazakh frontier. Exploration in the Caspian region fell within Orenberg's sphere of influence. Even the work of English merchant explorers like Woodroofe and Elton would inform the geographical information compiled at Orenberg. This did not guarantee, however, that the material disseminated by the Expedition would be state-of-the-art: the maps based on the Orenberg Expedition that came to Jonas Hanway fell far short of his own maps of the Caspian and the Aral Sea published in the same work.

The chart was engraved by John Gibson in 1753 for inclusion in Jonas Hanway's An Historical Account of the British Trade over the Caspian Sea. We are aware of three editions of the work; this example appeared in the third. We see eight examples of the complete work in institutional collections. We see only three examples of this map catalogued in OCLC, in the 1753 issue, at the Bibliotheque National de France, the National Library of Scotland, and the National Library of Israel.