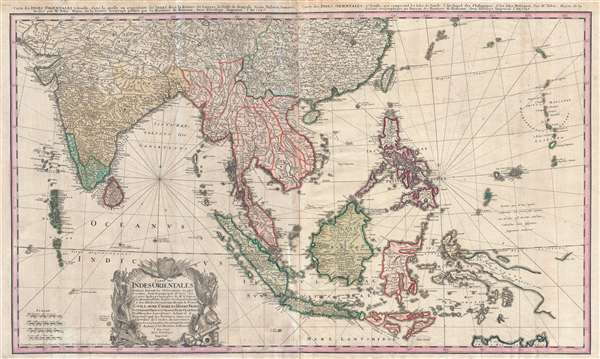 This is a beautiful old color 1748 Homann Heirs map of India, Southeast Asia, and the East Indies. This map stretches from India, the Maldives, and Sri Lanka (Ceylon) in the west to the Marianas in the east, and China and Tibet in the north to Indonesia and Australia (Nova Hollandia) and centers on Southeast Asia, including Burma, Thailand, Laos, Cambodia, Vietnam (Tonquin and Cochinchina) and Malaysia. Indonesia is labeled, including the islands of Sumatra, Java, and Borneo. Timor island is marked as well as New Guinea and Papua New Guinea. To the northeast lie the Philippines, where Luzon, Leyte, and several of the other islands in the archipelago are named. Taiwan (Formosa) lies to the north of the Philippines. The detail of this map is astounding. Delhi (Delly) appears on the map in India, as well as Portuguese Goa, the Ganges River, the Yangtze River, Nanjing (Nanking), Manila, and too many other cities, towns, and rivers to count.

Cartographically this map is derived from the work of the French cartographer and navigator Jean-Baptiste-Nicolas-Denis d'Après de Mannevillette (1707 – 1780). Mannevillette spent several years in the far east producing numerous surveys and updating older maps. His maritime atlas, the Neptune Oriental offered a wealth of new cartographic and maritime information in relation to the far east. It was published in 1745 and influenced numerous subsequent maps, as in the present 1748 example by Tobias Mayer and Homann Heirs.


Tobias Mayer (February 17, 1723 - February 20, 1762) was a German astronomer and cartographer famous for his studies of the Moon. He was born in Marbach, Germany and raised in Esslingen in poverty. Between 1744 and 1746, Mayer studied engraving in Augsburg under Andreas Silbereisen (1713 - 1751). Moving to Nuremberg, he began working for the Homann Heirs company in 1746. There, he showed outstanding prowess and introduced many improvements to cartography. For example, Mayer composed Mappa Critica, which illustrated the accuracy, or rather lack thereof, of the latitudes and longitudes of locations in Germany. The map showed three Germanies according to three different cartographers, de l'Isle, Homann, and himself. 'The latitudes of the cities was mostly consistent, whereas the longitudes of some places (such as Dresden or Prague) differed by as much as a degree, thus showing to what extent longitude was problematic even on land' (Wepster, Steven, Between Theory and Observations: Tobias Mayer's Explorations of Lunar Motion, 1751-1755, Berlin, 2009). Mayer went on to create some of the first charts of the Moon and his chart of the full moon was unsurpassed for half a century. His fame comes from his lunar tables, and thanks to his scientific reputation he was elected as the chair of economy and mathematics at the University of Göttingen in 1751. He became superintendent of the observatory in 1754, where he worked until his death in 1762. Mayer is occasionally erroneously referred to as 'the Elder' or 'Johann Tobias the Elder.' Learn More...

Good. Backed on archival tissue with some repairs and reinforcements and fold intersections. Recto exhibits some soiling visible in photos. Original annotations in blue and red pencil.