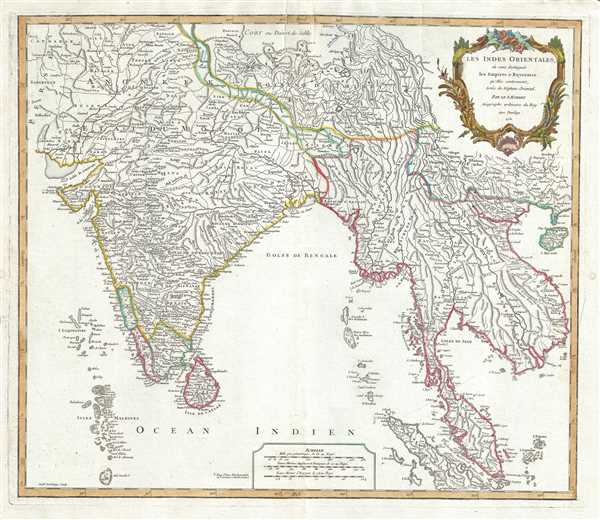 Identifies the apocryphal Lake of Chiamay.

This is a beautiful 1751 map of India and Southeast Asia by Robert de Vaugondy. It details the Indian subcontinent as well as much of Southeast Asia, including Thailand, Burma (Myanmar), Laos, Cambodia, Vietnam, Malay and Singapore. It also includes most of Tibet and parts of China. The map offers some offshore detail particularly in the vicinity of the Maldives and off the coast of Thailand. The island of Singapore is specifically identified.

Vaugondy maps the apocryphal Lake of Chiamay roughly in what is today Assam, India. Early cartographers postulated that such a lake must exist to source the four important Southeast Asian river systems: the Irrawaddy, the Dharla, the Chao Phraya, and the Brahmaputra. This lake began to appear in maps of Asia as early as the 16th century and persisted well into the mid-18th century. Its origins are unknown but may originate in a lost 16th century geography prepared by the Portuguese scholar Jao de Barros. It was also heavily discussed in the journals of Sven Hedin, who believed it to be associated with Indian legend that a sacred lake linked several of the holy subcontinent river systems. There are even records that the King of Siam led an invasionary force to take control of the lake in the 16th century. Nonetheless, the theory of Lake Chiamay was ultimately disproved and it disappeared from maps entirely by the 1760s.

The map includes a beautifully engraved title cartouche in the top right quadrant. This map was engraved by Guillaume Delahaye and drawn by Robert de Vaugondy in 1751 and published in the 1757 issue of his Atlas Universal. The Atlas Universal was one of the first atlases based upon actual surveys. Therefore, this map is highly accurate (for the period) and has most contemporary town names correct.

Rumsey 3353.092. Pedley, Mary Sponberg Belle et Utile: The Work of the Robert de Vaugondy Family of Mapmakers, 400.
Looking for a high-resolution scan of this?