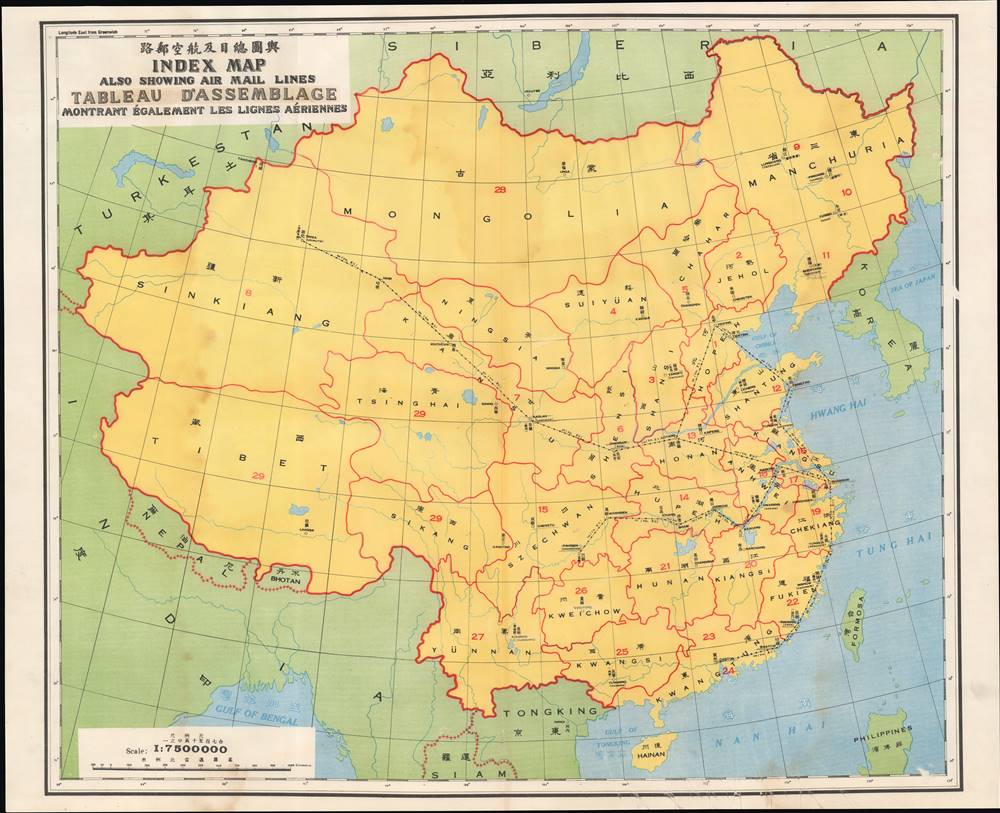 Guide to one of the most important atlases of modern China.
$400.00

This is the index map for the 1933 edition of The Postal Atlas of China (中華郵政輿圖), compiled by Charles Jacot-Guillarmod. It is a comprehensive map of China depicting air mail routes between major cities and to interior regions that were difficult to reach by other means.

Mail routes illustrated here connect major cities in eastern China and up the Yangzi River. Lines extending into Sichuan (Szechwan) Province and out to Xinjiang (Sinkiang) would have been necessary due to the difficulty and time of traveling over land. The numbers written in red in each province correspond to their order in the series of maps in the atlas.

Unsurprisingly, as this map was published by a branch of the Chinese government, it does not recognize the Japanese puppet state of Manchukuo, established the previous year, nor the Mongolian People's Republic. Instead, it reflects the rather ambitious territorial claims of the Chinese Republic that roughly corresponded to those of the Qing Dynasty at its greatest extent. In reality, China was subdivided into fiefdoms ruled by rival warlords, even after a national reunification campaign completed in 1928. However, the postal service was one of several threads that held together the aspiration of a unified China.

Like earlier dynasties, the new national government in Nanjing aimed to rename cities and other territories to project their authority and ideology. Most conspicuously, Beijing ('northern capital') was renamed Beiping (here Peiping). Other name changes were unpopular and temporary or were only used for official purposes. Additionally, many cities had multiple names due to their long history. These points are illustrated by the original owner's annotations for Lanzhou (Kaolan), Chongqing (Pahsien), and other cities.

Good. Dampstaining along central fold line and toward top-center. Light dampstaining towards bottom and bottom-right.