1548 Gastaldi Map of the Indian Peninsula 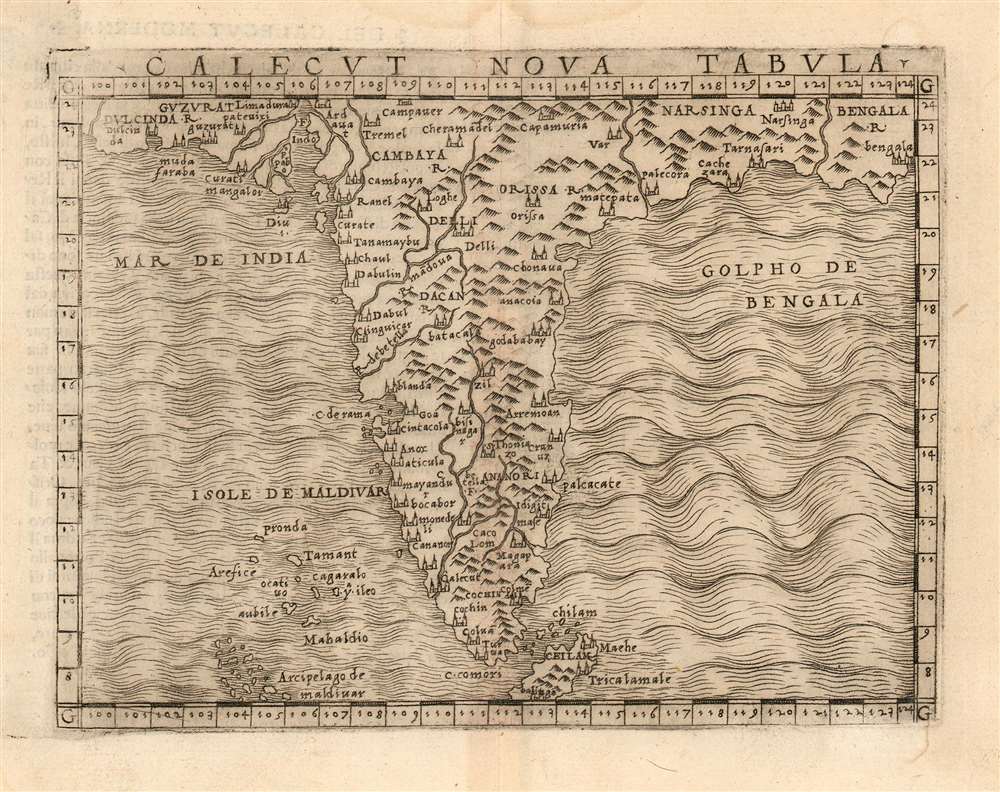 1548 Gastaldi Map of the Indian Peninsula

This is Giacomo Gastaldi's 1548 map of the Indian Peninsula. It is the earliest printed, modern map of India - all earlier maps of the region being iterations of Claudius Ptolemy's geographical information of the 2nd century. Though a Venetian, Gastaldi's information shows knowledge of the depth of Portuguese penetration of the subcontinent. Guzarat, Goa, Calecut, Delhi and many other place names appear on the map. Sri Lanka (Ceilam) is shown in its correct location and is not conflated with Sumatra, as many of the Ptolemaic maps appeared to do. The archaic term 'Taprobana' does not appear. The Maldives are shown with some exaggeration.

The map was printed in Venice for Gastaldi's La Geografia, his modernized Ptolemy, which was published in a sole 1548 edition. It appears separately in only the British Library, the Bayerische Staatsbibliothek, and the University of Toronto. The book is well represented in institutional collections.

Giocomo Gastaldi (c. 1500 - October, 1566) was an Italian astronomer, cartographer, and engineer active in the second half of the 16th century. Gastaldi (sometimes referred to as Jacopo or Iacobo) began his career as an engineer, serving the Venetian Republic in that capacity until the fourth decade of the sixteenth century. During this time he traveled extensively, building a large library relating to voyages and exploration. From about 1544 he turned his attention to mapmaking, working extensively with Giovanni Battista Ramusio, Nicolo Bascarini, and Giovanbattista Pedrezano, as well ask taking private commission for, among others, Venice's Council of Ten. He is credited with the Fresco maps of Asia and Africa still extent in the map room of the Doge's Palace. Gastaldi was also one of the first cartographers to embrace copper plate over woodblock engraving, marking and important development in the history of cartography. His 1548 edition of Ptolemy's Geographia was the first to be printed in a vernacular; the first to be printed in copperplate. It contained many new maps depicting newly discovered regions for the first time, including the first map to focus on the East Coast of North America, and the first modern map of the Indian Peninsula. Learn More...