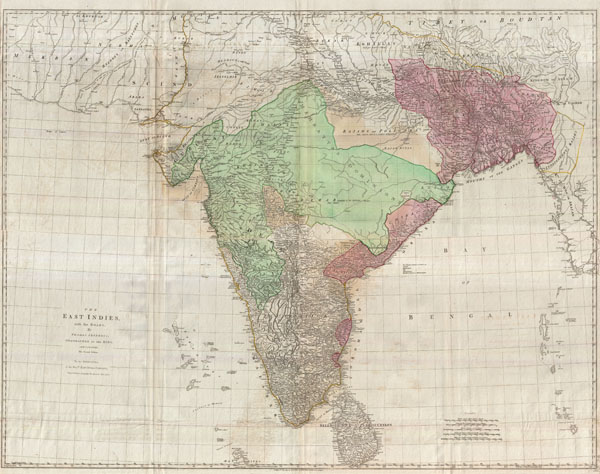 This is a staggering wall size map of India and Ceylon originally issued in 1768 by Thomas Jeffreys. Covers the Indian subcontinent from Mekran in the west to Assam and Aracan in the east, and from Bhutan in the north, south to Ceylon and the Maldives. Offers extraordinary detail throughout, with numerous notations on matters geographical, historical, and cultural. Shows roads, caravan routes, oases, temples, cities, treaty lines, archeological sites, mountain ranges, lakes, swamps and rivers. This map offers a smorgasbord of information for the historian interested political changes in India during the 18th century. Identifies Delhi (or Shah Jehan Abad), Agra, Bombay, Goa, Calcutta, Pondicherry, and countless other major and minor cities.

Our map predates the definitive Alexander Dalrymple mapping of India in the 1770s and so is quite vague in a number of areas - especially those controlled the independent Maratha Confederacy southwest of Bihar. In this area there are several speculative rivers as well as large lake, labeled Chilea or Ganga. This is most likely an erroneous mapping of Chilka Lake (Chilika Lake). Chilka Lake is the second largest salt water lagoon in the world - but was clearly missed by early mapmakers working on the Orissa coast.

Far to the north, just outside the border of the map, a note reads, 'A cow cut in the rock.' This is supposed to refer to the source of the Ganga or Ganges River. In Hindi this site is called Gomukh, which translates literally as, 'The Cow's Mouth.' The site itself is a cave that does in fact somewhat resemble the mouth a cow - but in this case something seems to have been lost in translation.

In Assam, Jefferys maps the 'supposed' locations of the apocryphal Lake of Chiamay. Early cartographers speculated that such a lake must exist as the source of four important Southeast Asian river systems including the Irrawaddy, the Dharla, the Chao Phraya, and the Brahmaputra. This lake began to appear in maps of this region as early as the 16th century and persisted well into the late 18th century. Its origins are unknown but may originate in a lost 16th century geography prepared by the Portuguese scholar Jao de Barros. It was also heavily discussed in the journals of Sven Hedin, who believed it to be associated with Indian mythology that a sacred lake linked several holy river systems. There are even records that the King of Siam led an invasionary force to take control of the lake in the 16th century. Nonetheless, the theory of Lake Chimmay was ultimately disproved and it disappeared from maps entirely by the 1780s.

On the far east of the map, Jefferys identifies the Kingdom of Arakan, which flourished in the 16th and 17th centuries. The city of Mrauk-U, marked here as Arakan, was once described by Portuguese merchants as one of the most beautiful locations on earth, is today a spectacular but derelict ruin.

All in all a spectacular map with much to offer and a welcome addition to any serious collection focusing on the subcontinent. This map was prepared by Jefferys and originally published by Sayer and Bennet. This is the second edition, and was published by Laurie and Whittle in Kitchin's 1794 General Atlas.

Kitchin, Thomas, Kitchin's General Atlas, describing the Whole Universe: being a complete collection of the most approved maps extant; corrected with the greatest care, and augmented from the last edition of D'Anville and Robert with many improvements by other eminent geographers, engraved on Sixty-Two plates, comprising Thirty Seven maps., Laurie & Whittle, London, 1794.