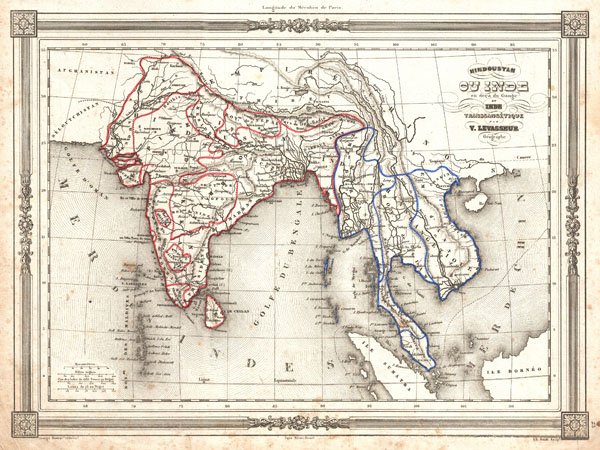 A beautiful 1852 map of India and Southeast Asia by Victor Levasseur. Features the entire sub-continent as well as all of Southeast Asia. Includes the modern day nations of India, Pakistan, Bangladesh, Nepal, Thailand, Vietnam, Cambodia, Laos, Burma, and Malaysia. Identifies major cities, rivers, mountains and various other topographical features. Features a neoclassical decorative border. Prepared by V. Levasseur for publication as plate no. 23 in Maison Basset's 1852 edition of the Atlas Illustre.


Thunot Duvotenay (1796 - 1875) was a French geographer active in the mid 19th century. Thunot is known to have worked with several other important cartographers of his dayincluding Barbie du Bocage, Vuillemin, Charle, Levassseur and Dufour. Learn More...

Good. Some foxing mostly confined to margins. Blank on verso.
Looking for a high-resolution scan of this?