1840 Wyld map of India and Afghanistan 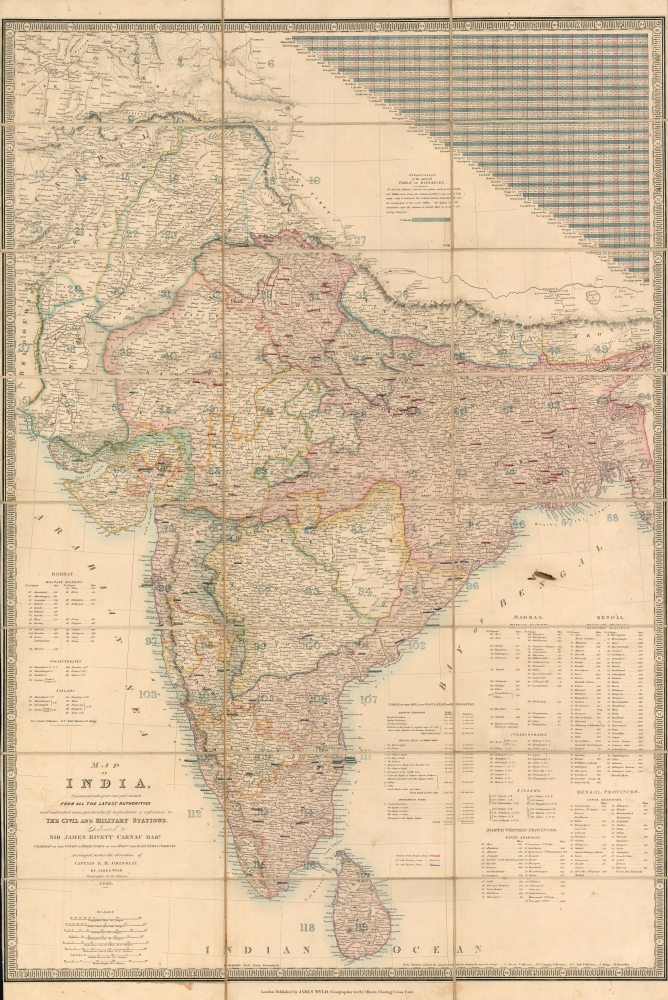 1840 Wyld map of India and Afghanistan

Rare, very early edition of the definitive English map of India from the period the period of the East India Company's Control of the Indian Subcontinent, and the initial period of 'The Great Game.' The initial publication of the map pre-dates, by a year, the first Anglo-Afghan war, the theater of which is falls entirely within the scope of this map. Indeed, the production of the 1837 Wyld map was likely inspired by Lord Palmerston and John Hobhouse's warnings of a possible Russian invasion of British India through Afghanistan, threatening the EIC's interests in India. The onset of the Anglo-Afghan war in 1839 would have only sharpened public demand for so detailed a map as this. (The extravagant debacle of the destruction of Elphinstone's army in the Khyber mountains in January 1842 may well account for the relative ubiquity of that edition of this map.)

The map's superb detail reflects the extent of British East India's control over the vast country, and the great difficulty posed in trying to comprehend the scope of that control. It was clearly intended as an administrative tool to that end, but also to be of utility to British travelers working with the EIC or civil service. The map's baffling and rich detail is made more legible by the imposition of a numbered coordinate grid, the numbers of which cross-reference to lists of military and civil stations in Madras and Bengal as well as 'Collectorates,' the main administrative regions employed by the EIC to levy taxes from their territories. Military administration is indicated on the map showing stations of the Bengal Army, Bombay Army and Madras Army, distinguished from one another with hand color. All three of these armies represented British military power, via the three 'Presidencies' of Bengal, Bombay and Madras. The armies themselves belonged to the East India Company, until the Government of India act of 1858. The map itself is superbly executed, largely thanks to the ongoing labor of the Great Trigonometric Survey of India, whose scientific standards were unprecedented at the time.

This map was first published in 1837, and stayed in publication for the rest of the century. This example, printed and dated 1840, is among the earliest available. OCLC shows only the 1837 issue predating the 1840; only two examples of this state appear, one at Harvard and the other at the University of Edinburgh. 1842 issues appear to be more common and appear on the market from time to time.

Very good condition. Dissected and mounted on linen for folding, as issued. Original slipcase present and in sound condition.