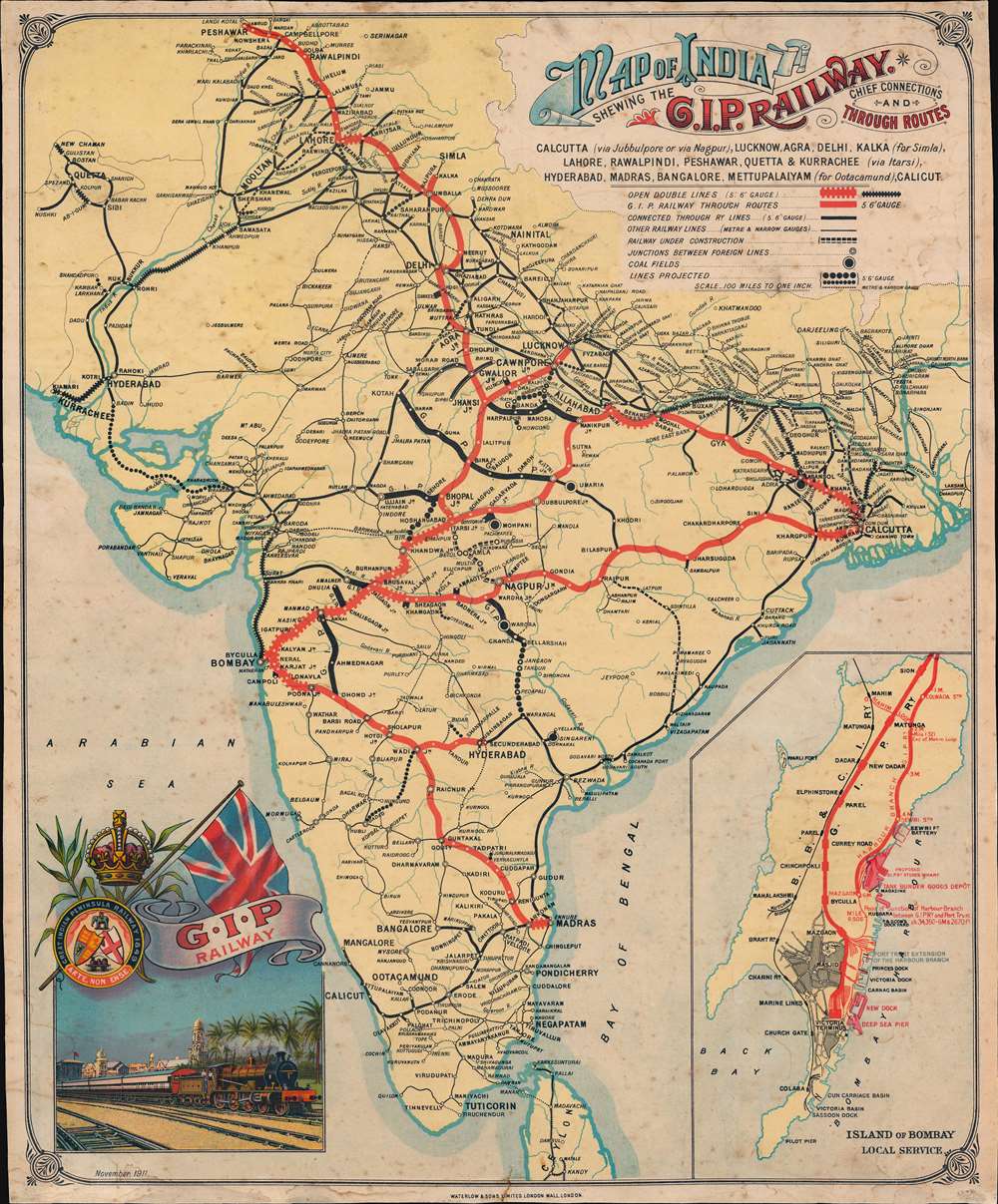 A striking and rare discovery - this is a 1911 Waterlow and Company chromolithograph promotional broadside issued to promote the Great Indian Peninsular Railway (GIPR), Asia's first and greatest railroad. Boldly promoting the GIPR's expansive sub-continent wide rail network, this map was designed for display in railroad stations throughout India. The map covers the entire subcontinent, with GIPR trunk lines highlighted in red and subsidiary lines via a keyed network of symbols. In the lower right, a large inset of Bombay promotes GIPR services within the network's nucleus. In the lower-left, a finely executed vignette illustrates a GIPR train leaving Bombay's Victoria Terminus (Chhatrapati Shivaji Maharaj Terminus), with theIconic Mumbai Municipal Corporation Building (MMCB) recognizable in the background.

The GIPR is arguably Asia's busiest and most important railroad network, and certainly Asia's first. Until the second half of the 19th century, development in India was limited to the easily accessible coastlands. Beyond the coast and navigable rivers, lack of infrastructure made accessing and developing the resource-rich interior, particularly the Deccan Plateau, nearly impossible. In 1845, an investment syndicate led by railroad pioneer Robert Stephenson (1803 - 1859) recognized the game-changing potential of a Trans-Subcontinental railroad. Construction began in 1849 under the direction of James John Berkeley (1819 - 1862). The first completed line, from Bombay to Than, opened in 1853. Subsequent new lines and extensions followed as the network grew to encompass the subcontinent.

The hoped-for riches were realized, as infrastructure and development exploded throughout the Indian interior. The railroad also brought with it political and economic stability, as it facilitated quick transport of troops, aid, and resources as needed.

The railroad also engendered a rising Indian solidarity movement. The Indian national consciousness, initially hampered by ancient rivalries that far exceeded distaste for the British, emerged as diverse people traveled, communicated, and interacted for the first time. In this context, the railways undermined the 'divide and conquer' strategy that had hitherto defined the British Raj.

When India achieved its long-fought independence in 1951, the GIPR was merged into the Indian Railways. Today, most of the old GIPR lines are still in operation, moving millions of people around the world's most populous country.

The Inspiration of Jules Verne

Three globally significant transportation development occurred in roughly the same year, 1869.In totality, these three major constructions transformed global transportation, shaving months off the circumnavigation of the globe. The accomplishments ushered in a new era of globality, something instantly recognized in elite intellectual, political, and business circles. Jules Verne was inspired to begin writing Around the World in 80 Days, first published just 3 years later in 1872.

This view was printed in London by Waterlow and Son, one of London's largest printers. It was made for display in train stations and billboards in India - a function accounting for its extreme ephemerality, as the tropical climate would have made it unlikely to survive more than a few weeks of service. Indeed, our research suggests this is the only surviving example.

Very good. Exhibits some soiling and foxing. Two closed one-half inch (1/2) tears professionally repaired on verso. Blank on verso.
Looking for a high-resolution scan of this?