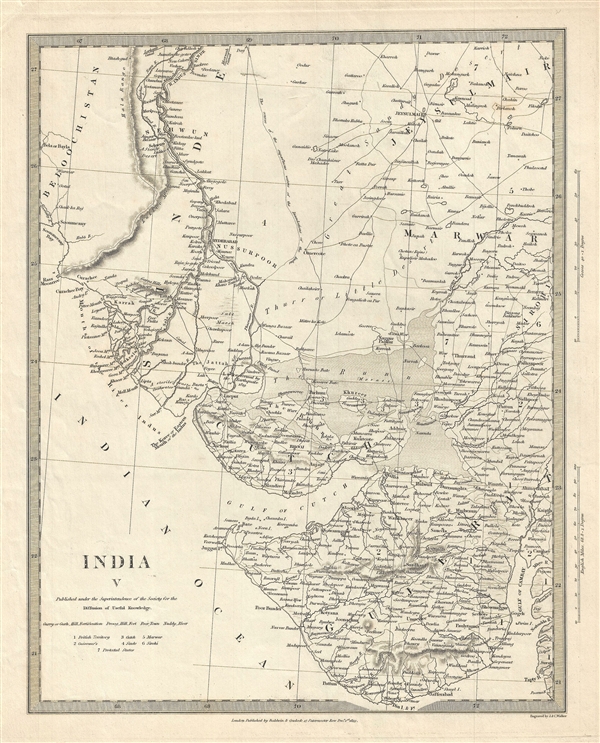 This is an uncommon 1833 first edition example of the Society for the Diffusion of Useful Knowledge or S.D.U.K.’s map of the western parts of India. It covers from Beloochistan in modern day Pakistan to the Gulf of Cambay. Includes the Indus River Delta and the Indian state of Gujarat. The Great Rann of Kutch, the largest salt desert in the world is identified. The map also notes the Sindri Lake, formed by the earthquake of 1819.

This map is part of A Series of Maps, Modern and Ancient, issued by subscription. Each folder in the series would contain a set of two maps bound together. The map accompanying this folder, not included here, was of Arkansas, Missouri, Mississippi, Kentucky, Tennessee, Alabama and Illinois. Original folder includes the names of committee members of the ‘Society’, contents of numbers previously published, the folder number, which is this case is XLI, the contents and the printer and publication details. This map was printed by William Clowes and issued by the Society for the Diffusion of Useful Knowledge in their Dec 1, 1833 subscriber’s edition folder. The folder at the time was priced at 1 shilling plain or 1 shilling 6 pence colored. Published by Baldwin and Cradock.