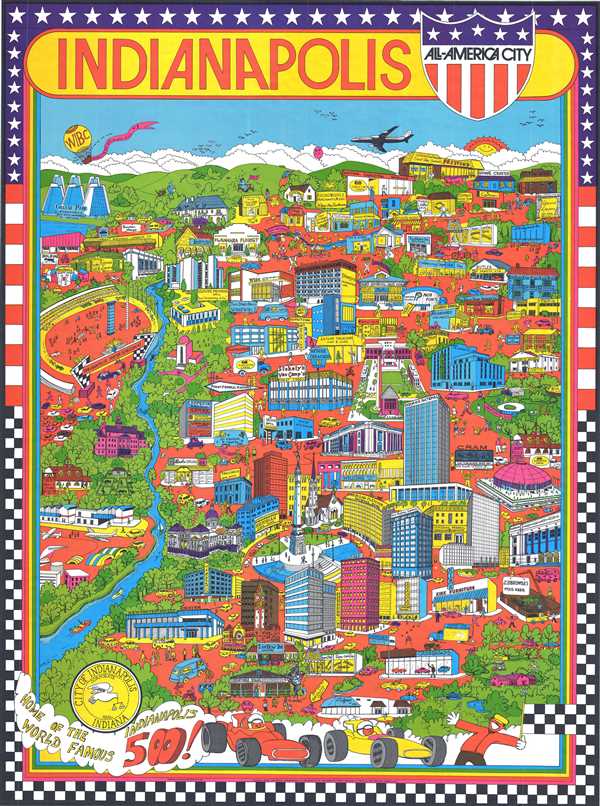 Home of the Indianapolis 500 occupies the bottom border of the map - with incredible illustrations of racecars!
$450.00

The Indianapolis 500, billed as 'The Greatest Spectacle in Racing' began in 1911 and is considered part of the Triple Crown of Motorsport, with the other two races being the Monaco Grand Prix and the 24 Hours of Le Mans. The Indiana World War Memorial Plaza occupies five city blocks and is the national headquarters of the American Legion. A memorial cenotaph, an obelisk, University Park, home to statues and a fountain, and the Indiana World War Memorial, modeled after the Mausoleum of Halicarnassus also occupy the site. The Indiana State Soldiers and Sailors Monument, erected in the center of the city, was originally conceived as a tribute to Indiana veterans of the American Civil War but also honors veterans of the American Revolutionary War, the War of 1812, the Mexican-American War, and the Spanish-American War. It holds the distinction of being the first war memorial in the United States to be dedicated to the common soldier.

This map was published by Trans Continental Cartographers of Vancouver, British Columbia in 1971. They published several pictorial maps of American and Canadian cities, including Boston, San Francisco, Kansas City, New Orleans, Minneapolis, and Vancouver. It was distributed by A.A. Sales Inc. of Seattle, Washington. We were able to locate only one example of this map in institutional collections, making it a rare and entertaining addition to any collection.

Transcontinental Cartographers Limited (fl. c. 1971 - 1972) was a publishing company based in Vancouver, British Columbia. The company published several pictorial maps of American and Canadian cities, including Boston, San Francisco, New Orleans, Kansas City, Atlanta, Minneapolis, and Vancouver. It appears that they subscribed to the ‘subscription model’ of cartography, by accepting payment from companies to feature their businesses in their maps. Their maps were distributed by A.A. Sales Inc. of Seattle, Washington.