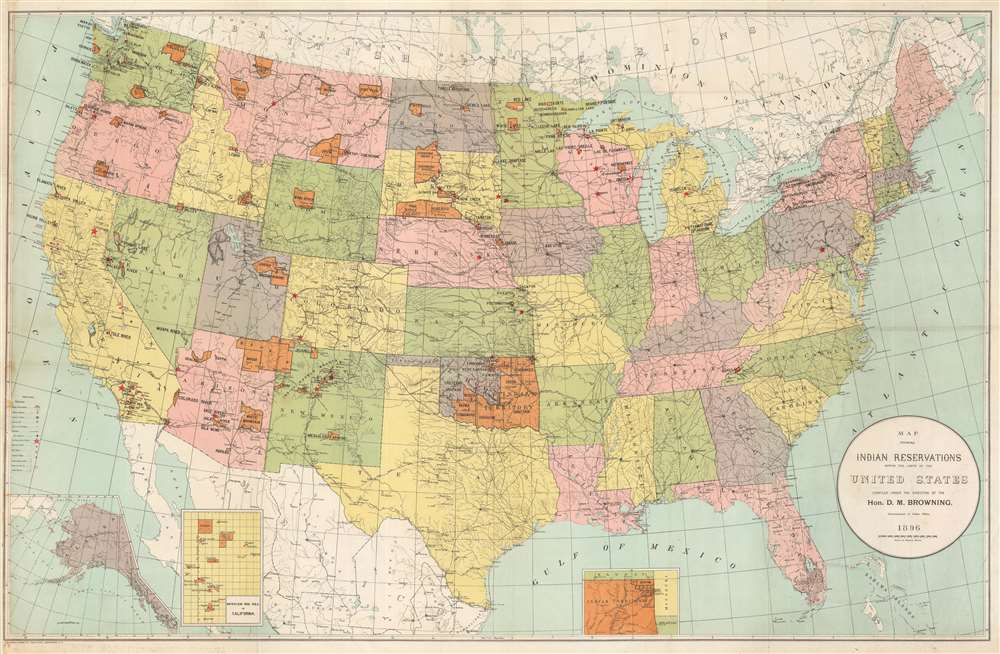 Indian reservations are areas of land managed by an Native American tribe recognized by the U.S. federal government. 326 Indian reservations exist within the United States and each reservation is associated with a specific Native American nation. Of the 574 tribes recognized by the federal government, some have multiple reservations, some have one or share a reservation with another tribe, and some do not have any. While many reservations are small, twelve are larger than the state of Rhode Island. The term 'reservation' has its genesis in the early peace treaties between the independent nations and the U.S. government. In these treaties, many of which were signed under duress or fraud, tribes surrendered large swaths of land to the U.S. government. However, some areas of land were designated as still belonging to the tribes, or in 'reserve', and were often called 'reservations'.

This map was created under the direction of Daniel M. Browning for the Bureau of Indian Affairs in 1896 and printed by the Norris Peters Company. This map is well represented in institutional collections.

Daniel Monroe Browning (October 11, 1846 - January 30, 1903) and an American lawyer, jurist, and government official. Born in Benton, Illinois, Browning received and academic education and graduated from the law school at the State University of Indiana in June 1866. That month, Browning stood before the Illinois Supreme Court to take bar exam and passed. Browning immediately opened a private firm in Benton, however, it appears that he must not have immediately found success, because he taught at the local public school for the next two years. Browning was elected county judge in Franklin County, Illinois (his home county) in November 1869 and was reelected in 1873 and 1877. He was elected to the First Judicial Circuit Court in Illinois in June 1879 and served until 1885, when he again went into private practice. On April 17, 1893, President Cleveland named Browning Commissioner of Indian Affairs. Browning held that position until May 2, 1897, after which he moved to East Saint Louis, where he opened a private law firm in partnership with W.S. Forman. He married Tirzah Isabel Naylor, of Benton, on October 11, 1866, with whom he had three children. Learn More...