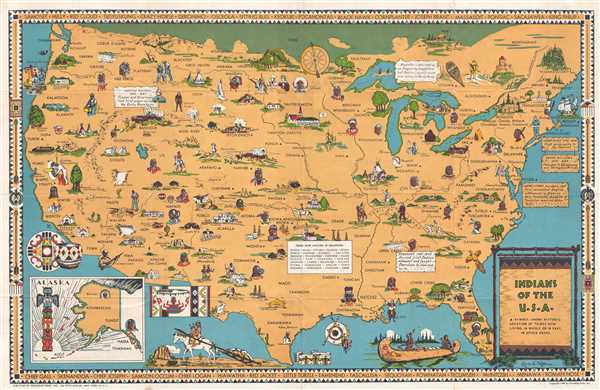 Approximates the home region of over 100 different Native American tribes.

This is a 1944 Louise E. Jefferson pictorial map of the United States illustrating the historic home regions of Native American tribes. The map depicts the continental United States from the Pacific Ocean to the Atlantic Ocean and from Canada to the Rio Grande River and the Gulf of Mexico. Over 100 different Native American tribes are placed in their 'historic locations' throughout the continental United States and Alaska and a small triangle notes that some tribes are 'now living, in whole or in part, in other areas'. A text box lists the 'tribes not located in Oklahoma', because they had been forcibly removed from their ancestral lands in the 19th century and relocated to Oklahoma. The now infamous 'Trail of Tears' (illustrated on the map) was just one aspect of this policy. Portraits of numerous Native Americans are scattered throughout, including portraits of Chief Joseph, Sacagawea (Sacajawea), Keokuk, Little Turtle, Geronimo, Powhatan, and Osceola.

Sketches of several buildings, including Dartmouth, a long house, a wigwam, the Alamo, and pueblos are included. A handful of places are illustrated and labeled as well, such as, Sutter's Fort, Bent's Fort, Crater Lake, Boulder Dam, Roosevelt Dam, Mesa Verde, Yellowstone Park, and Devil's Tower. Cities, like San Francisco, Washington, D.C., Chicago, and New York are marked and labeled. Explorers and other 'frontier' figures are also referenced, including General Custer, René-Robert Cavelier, Sieur de la Salle, and Daniel Boone. As this map was created during World War II, aspects of wartime life are also inescapably rendered. Airplane Manufacturing, U.S. Army Camps, Construction Work, Factory Worker, and other vignettes serve as a reminder of global events beyond the scope of 'Indians of the U.S.A.' An inset map of Alaska, including references to five Native Americans tribes from the region, is situated in the lower left corner. A decorative border encircles the entire map and the names of thirty-three influential Native Americans occupy the top and bottom sections of the border, while Native American artistic elements make up the designs on the left and right sides.

This map was created by Louise E. Jefferson and published by Friendship Press, Inc. in 1944.

Louise E. Jefferson (1908 - 2002) was an American calligrapher, illustrator, art director, cartographer, and photographer. Notably, she was the likely the first African-American art director at a publishing firm. Born in Washington, D.C. to Paul and Louise Jefferson, she was encouraged toward an artistic profession from a young age. Her father was a calligrapher for the U.S. Treasury and her mother earned a living playing piano and singing aboard cruise ships on the Potomac River. Even though she was encouraged to study music and it ran in her family, Jefferson chose to study graphic arts. She attended Howard University in New York City where she studied fine arts and then the School of Fine Arts at Hunter College where she focused on graphic arts. After her move to Hunter, Jefferson became one of the founding members of the Harlem Artists Guild, where she became familiar with Augusta Savage, Gwendolyn Bennett and Langston Hughes. For a time she roomed with Pauli Murray, who would become a noted lawyer, author, educator, and civil rights and women's movement activist. Jefferson mostly worked as a freelancer during this time in her life, until she was noticed by the Friendship Press, the publishing firm of the National Council of Churches, and hired as a full time staff member. By 1942, Jefferson had become the art director for the firm and controlled every aspect of book production. Even during her time working at Friendship, she accepted freelance work from numerous publishing companies and university presses. Jefferson retired from Friendship Press in 1960, although he retirement was anything but relaxing. At this point, she embarked on an incredibly ambitious project: a book about decorative arts in Africa. Over the course of several years, she traveled to Africa five times, visiting at least fifteen different countries. The book was published in 1973 and contains over 300 illustrations, all of which are her own drawings or photographs. Jefferson described her book as 'a visual sampling of what the spirit and tempo of the African artist's role has been in the past and what it continues to be today.' Louise passed away in 2002 at the age of 93. Learn More...

Very good. Even overall toning. Verso reinforments at some fold intersections. Blank on verso.
Looking for a high-resolution scan of this?