1600 Bussemacher Map of East Asia, India, and the East Indies 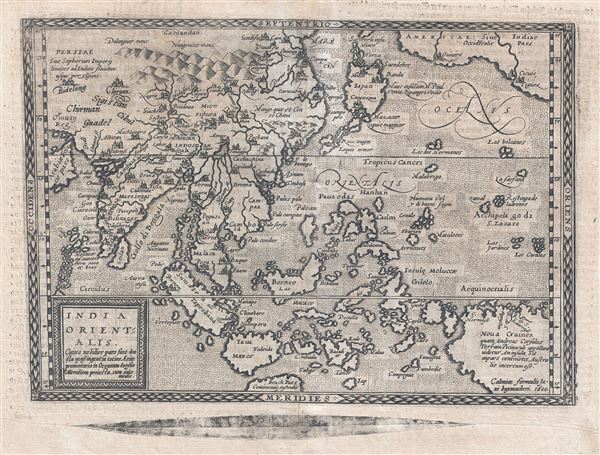 1600 Bussemacher Map of East Asia, India, and the East Indies

An attractive and scarce 1600 map of the East Indies by Johann Bussemacher and Matthias Quad. Cartographically derived from Ortelius' slightly earlier map of the same region, this map covers from Arabia east to the Americas and New Guinea and from northern China and Japan to Java, including all of modern day India, China, Japan, Thailand, Burma, Malaysia, Singapore, Indonesia, Nepal, Tibet, Vietnam, Laos, and Cambodia, as well as parts of New Guiana, America, Arabia, and (possibly?!) Australia.

This map offers much of interest to the scholar. Much of the cartography is drawn from Ortelius who himself is interpreting tales from Marco Polo. For example a curious landmass far to the south, below Java, is tantalizingly labeled 'Beach Pars Continentis Australis'? Are we looking at an early mapping of Australia? Although the positioning is extremely suggestive, the answer is unfortunately, most likely not. 'Beach' is a corruption Boeach, a variant spelling for Marco Polo's Lochac, or Siam. Polo's confused topography was continually pushed southward into unknown waters as European explores unveiled more and more of the East Asian world. Consequently, Polian locals like Lochac (Siam) and Maleteur (Malay) are not uncommonly mapped twice, once in the correct position and again, to maintain consistence with the revered writings of Polo, somewhere else.

Further to the East there is another tantalizing reference to a great southern continent in th elands of Nova Guinea (New Guinea). Here a note reads 'An insula sit, an pars continentis ustralis incertum est' (An island, if part of the great Southern continent is uncertain). This too, though, is unlikely to be a true reference to Australia. Here the cartographer is referencing common speculation at the time dating to the writing of Aristotle suggesting that somewhere in the southern hemisphere there must be a great continent to counterbalance the weight of Asia/Europe in the northern Hemisphere. Such was Aristotle's influence that several thousand years later, until finally disproved by the navigations of Cook, cartographers and navigators were still looking for the rumored continent.

Sumatra is here labeled both Taprobana and Sumatra. Taprobrana, is typically associated with Ceylon or Sri Lanka, but here has been erroneously relocated to Sumatra. This error is typically associated with Abraham Cresques and Fra Mauro, both of moved Ceylon eastward roughly to where Sumatra lies. Subsequent cartographers and geographical writers, such as Ludovico di Varthema, who influenced both Ortelius and Mercator, write 'I think [Sumatra] is Taprobana.'

In Asia proper the cartographer maps the apocryphal Lake of Chiamay or Cachiachina (roughly in what is today Assam, India. Early cartographers postulated that such a lake must exist to source the four important Southeast Asian river systems: the Irrawaddy, the Dharla, the Chao Phraya, and the Brahmaputra. This lake began to appear in maps of Asia as early as the 16th century and persisted well into the mid-18th century. Its origins are unknown but may originate in a lost 16th century geography prepared by the Portuguese scholar Jao de Barros. It was also heavily discussed in the journals of Sven Hedin, who believed it to be associated with Indian legend that a sacred lake linked several of the holy subcontinent river systems. There are even records that the King of Siam led an invasionary force to take control of the lake in the 16th century. Nonetheless, the theory of Lake Chiamay was ultimately disproved and it disappeared from maps entirely by the 1760s.

The Philippines are present with Mindanua (Mindano) vaguely recognizable but are for the most part extremely vague. Near by the Spice Islands are vastly oversize thus highlighting their importance in the eyes of European cartographers.

This map was issued by Matthias Quad and Johann Bussemacher in Cologne for the 1608 Fasciculus Geographicus.

Johann Bussemacher (fl. c. 1580 - 1613) was a German publisher, engraver, art dealer, and bookseller active in Cologne in the late 16th and early 17th centuries. He was trained as a copper engraver in Dusseldorf, where he was born. Around in 1583 he established his own imprint and a publishing concern in Cologne. Bussemacher was for a time the largest and most successful publisher in Cologne. He is commonly associated with producing engraved images of saints and noble personages, but he also issued several maps in conjunction with Matthias Quad. Learn More...


Matthias Quad (1557 - October 29, 1613) was Dutch engraver active in Cologne during the late 16th and early 17th centuries. Quad was born in the Netherlands and studied engraving under Johannes van Deutecum (fl. 1552 - 1606) of Deventer and Hendrick Goltzius (1558-1616) of Haarlem. Around 1580 he relocated to Heidelberg or Cologne where he primarily engraved geographical texts in conjunction with fellow publisher Johann Bussemacher. In 1608 he published an atlas, Fasciculus Geographicus, with Bussemacher in Cologne. In 1609, another major work, his Teutscher Nation Herligkeit, a historico-cultural regional study of Germany, was published by Wilhelm Lutzenkirchen . Learn More...