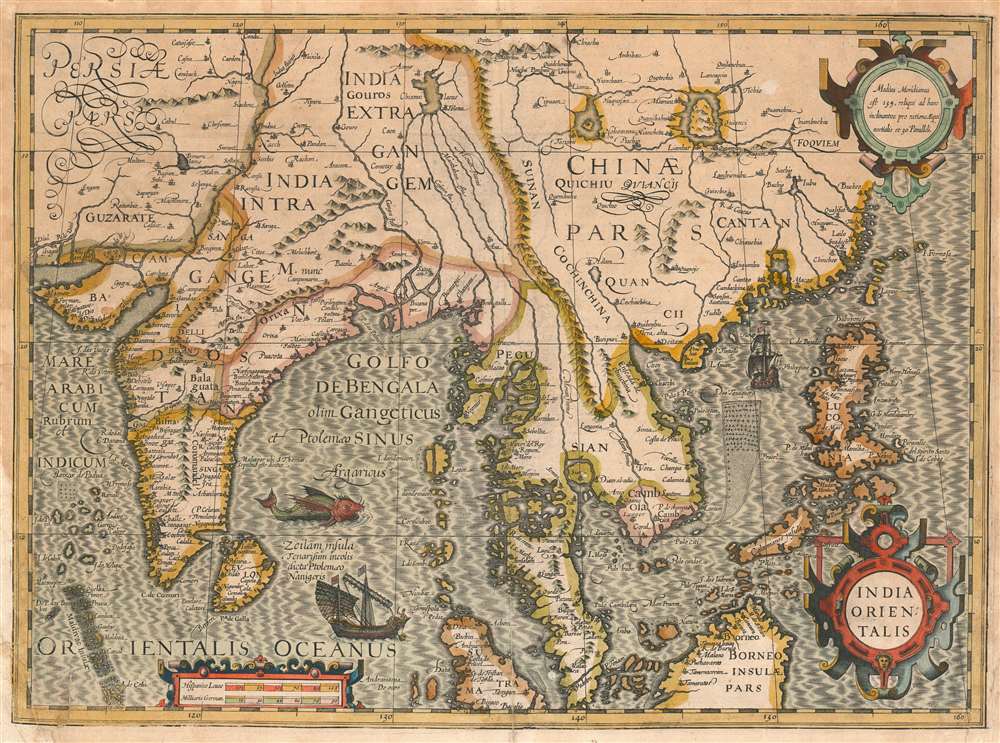 One of the Most Beautifully Engraved Early Maps of Southeast Asia

This example of Jodocus Hondius' 1606 map of India, China and Southeast Asia is one of the most beautifully engraved early maps of the region. It is among the 37 maps Hondius added to the plates he had acquired from Mercator's heirs, in order to bring the work up-to-date. The result is vigorous and detailed map, typical of the elder Hondius' engraving. The map encompasses the Indus River valley in the west, and extends east to embrace China and the Philippines. The distorted islands on the Burmese coast represent the Mergui Archipelago. Ayuthaya (Siam) is shown as an island. The Philippines are shown in detail as are the northern coasts of Borneo and Sumatra. Formosa (Taiwan) is named, but it is not accurately depicted. The Indian Ocean is decorated with a sea monster and a Dhow, while a European vessel lays claim to the waters between Luzon and the Chinese coastline.

The map shares the view of Mercator, Ortelius and Linschoten with respect to South Asia's rivers, showing five between the Ganges and the Mekong originating in the massive, mythical Himalayan lake Chiamay, here located in southeast Asia near the border with India and Tibet. Early cartographers postulated that such a lake must exist to source the important Southeast Asian river systems: the Irrawaddy, the Dharla, the Chao Phraya, and the Brahmaputra. This lake began to appear in maps of Asia as early as the 16th century and persisted well into the mid-18th century. Its origins are unknown but may originate in a lost 16th century geography prepared by the Portuguese scholar Jao de Barros. It was also heavily discussed in the journals of Sven Hedin, who believed it to be associated with Indian legend that a sacred lake, Mansarovar, linked several of the holy subcontinent river systems. There are even records that the King of Siam led an invasionary force to take control of the lake in the 16th century. Nonetheless, the theory of Lake Chiamay was ultimately disproved and it disappeared from maps entirely by the 1760s.

The map was engraved for inclusion with Jodocus Hondius' 1606 Amsterdam edition of Gerard Mercator's Atlas sive Cosmographicae Meditationes de Fabrica Mundi et Fabricati Figura. Typographical evidence on the verso indicates that this example appeared in the 1611 edition. Perhaps a dozen examples of the separate map, in varying editions, appear in institutional collections in OCLC. The Atlas is well represented in institutional collections; however OCLC lists examples of the 1611 edition in only the Newberry Library the Atheneum Bibliotheek, the Koninklijke Bibliotheek, and Universitats und Landesbibliothek Bonn.

Average condition. Mends to centerfold and lower corners. Few wormholes with very slight loss. Else an attractive example with a bold strike.