1946 Friendship Press Pictorial Map of India with Paste Down Additions 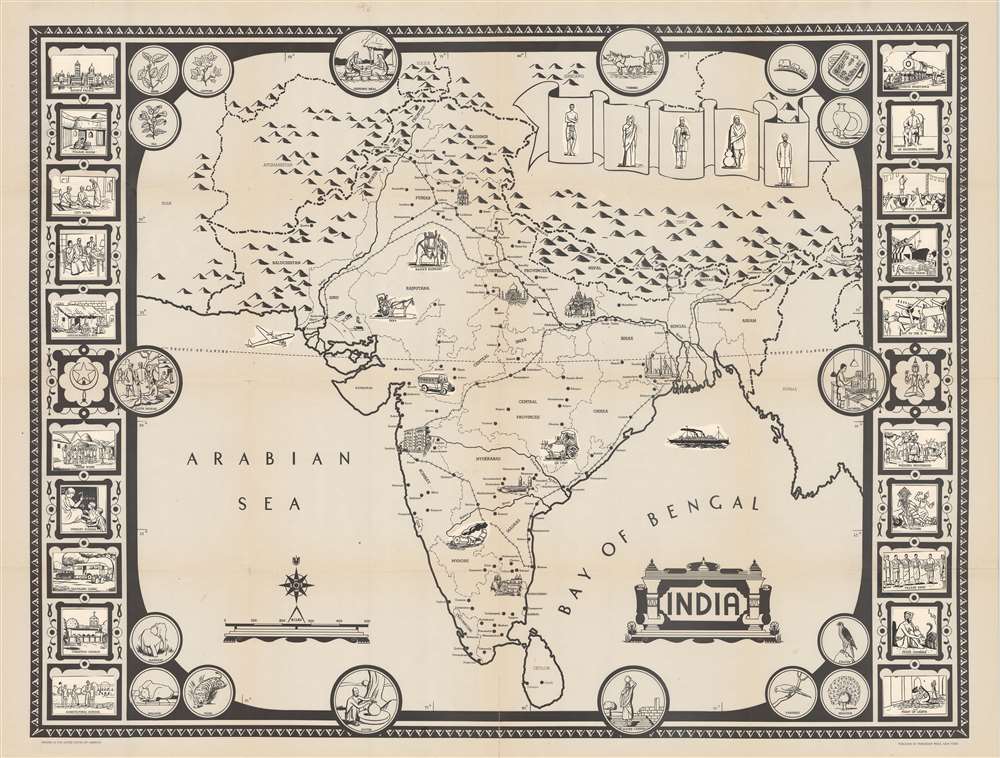 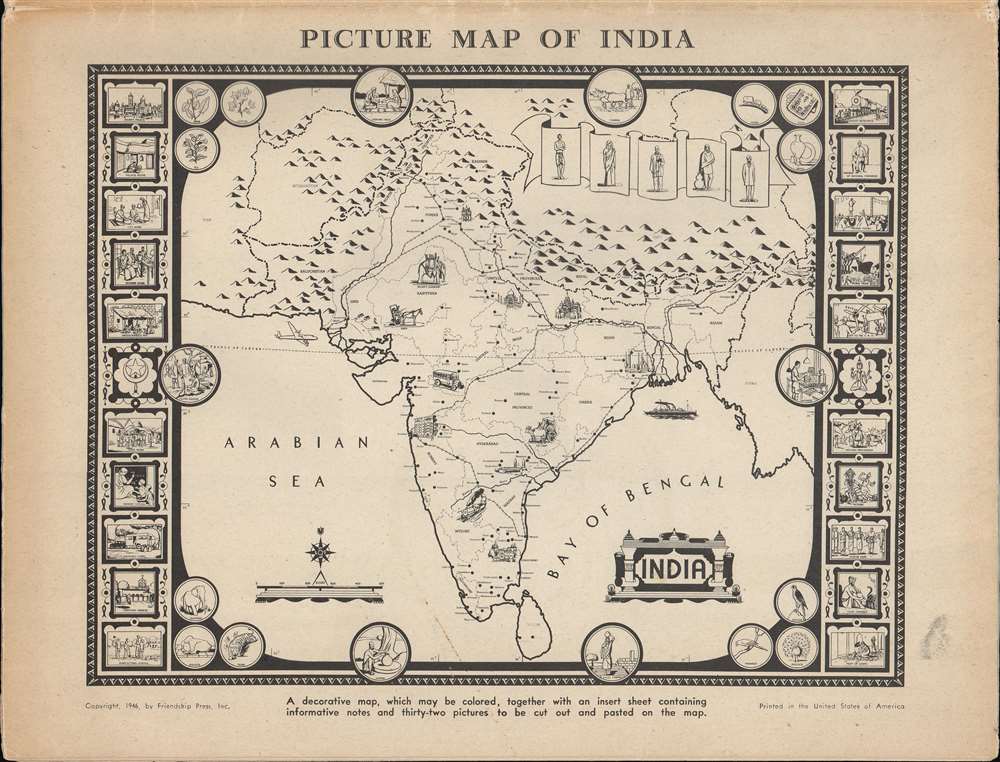 1946 Friendship Press Pictorial Map of India with Paste Down Additions

Pastedowns allow a glimpse into the evolution of this wonderful piece!

This is a 1946 Friendship Press pictorial map of India, in a rare incomplete proof state. Predating the Partition of India by one year, the map depicts the region from Iran to Burma and from China and the Soviet Union to Sri Lanka (Ceylon). Profile views of buildings mark certain cities, such as the Taj Mahal, at Agra. Other cities and towns are labeled throughout, including Bombay, Hyderabad, Peshawar, Lahore, Delhi, Calcutta, and Karachi. Provinces throughout India are illustrated and labeled. Railroads connect almost all of India's major cities. India's natural wonders, the Himalayas, and the Indus and Ganges Rivers are also evident.

Circular pictorial vignettes occupy all four corners. From the top left and proceeding clockwise, the corners present illustrations of Indian crops, artisan-made goods, birds (including a peacock and a parakeet), and wildlife (elephants and tigers). The circles along the sides contain scenes of Indian life, including farming, carrying water, making pottery, selling cloth at a bazaar, and working in a factory. These elements all appeared on the earlier proof stated that we have handled. The present proof is a later state that features pastedowns in the boxes along the left and right borders and of vignettes within India itself. These pastedowns depict the Rajah's elephant, adorned in all its finery, a bus, and a train. A plane flies into Karachi, the region's busiest airport, and a steamship plies its way through the Bay of Bengal, likely having recently left Calcutta, one of India's major ports. A scroll in the upper right quadrant bears pastedowns of Indians wearing different types of clothes.

Twenty pastedowns fill the boxes along the left and right borders and present views of various aspects of life in India. These images are divided into four groups of five, and each group has a different theme. In the upper left, the images focus on different kinds of dwellings in India, from the Rajah's palace down through the social classes to an untouchable's hut. The lower left presents various types of self-improvement, including schools, clinics, and a Christian church (here it's important to remember who this map's publisher was). In the upper right Indian political life appears, including passive resistance, a member of the Indian National Congress, and delegates traveling to the newly formed United Nations. Cultural scenes occupy the bottom right, with a wedding procession, Indian actors, and a snake charmer providing a glimpse into life in India.

This map was created and published by the Friendship Press in 1946. Several editions were published, beginning in 1930, and subsequent editions appeared in at least 1946 and 1963. Curricula for public schools in the 1950s suggested using this map, and other maps published by Friendship Press when teaching elementary students about Asia. All editions of the Friendship Press picture map of India are exceedingly rare, with only one edition, that from 1963, appearing in OCLC. Given the map's scarcity in all editions, plus the fact that the present map is a proof state, it offers an exceptional opportunity.

Gilbert Quinn LeSourd (February 1, 1887 - June 22, 1962) was an American missionary, educator, reverend, and publisher active in New York and New Jersey in the early 20th century. LeSourd was born in Seattle, Washington. He received his early education at the College of Puget Sound, followed by and a bachelor of divinity from Drew Theological Seminary, an da doctorate of philosophy from New York University. LeSourd was the owner of Friendship Press, a printing house focused on missionary texts, maps, and other educational materials. He was also the Associate Secretary of the Missionary Education Movement. LeSourd died in Schenectady, New York. Learn More...