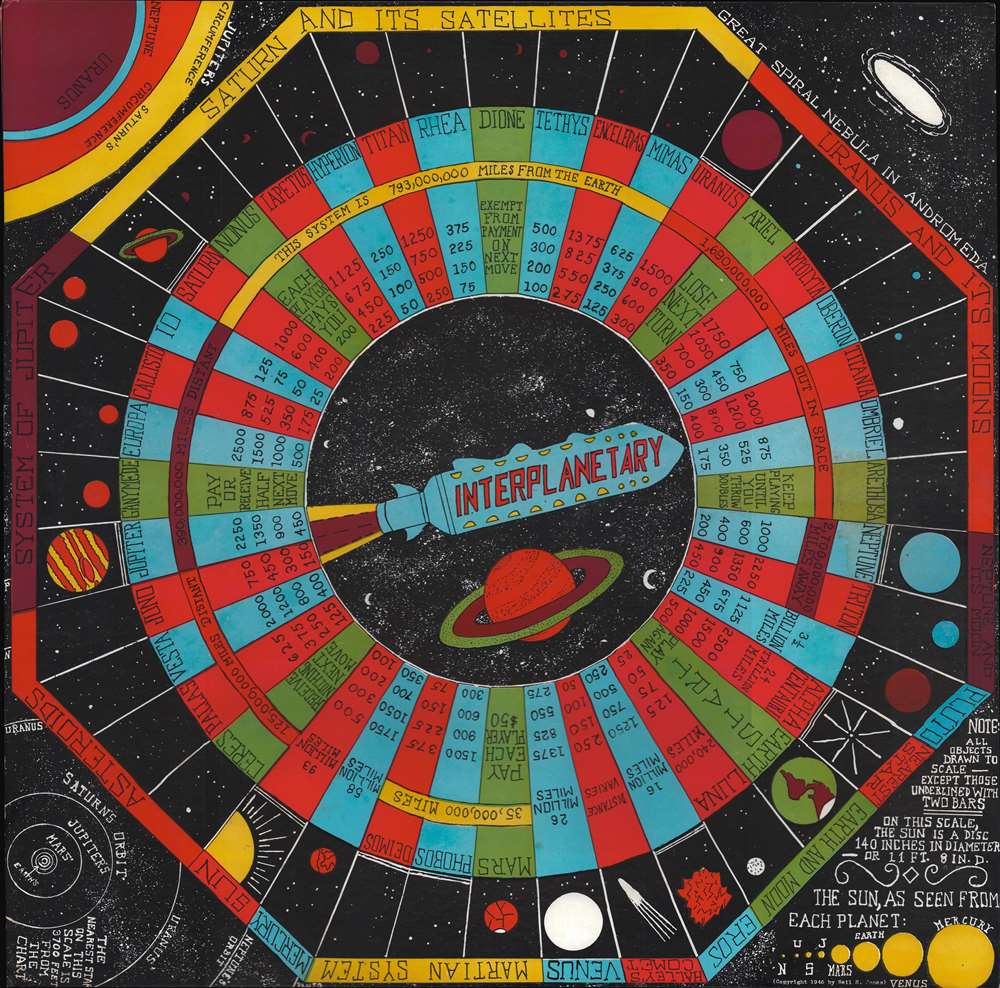 Unpublished game by one of the early Pioneers of Science Fiction.
$2,500.00

This is a 1946 game board for 'Interplanetary', an unpublished board game by pioneering science fiction writer Neil Ronald Jones. Although lesser known, Jones was one of the great early pioneers in the genre of science fiction, ranking with Arthur C. Clarke, Robert A. Heinlein, and Ray Bradbury. Jones was a life-long devotee of board games and spent his spare time developing this game - although it appears not to have been published, this being one of only 5 known proof examples (all others are in private hands).

Entitled 'Interplanetary', the game consists of a series of wedges creates a circle around the center of the board, where a large rocket emblazoned with the game's title appears. Each wedge bears the name of a planet or moon in our Solar System. Illustrations of the planets, along with comets, moons, and other astronomical bodies, surround the wedges. Illustrations of the orbits of some of the planets as well as the relative circumference of Jupiter, Saturn, Neptune, and Uranus occupy the corners. While very little is known about gameplay, the game started on the wedge for Earth and must have proceeded clockwise, much like monopoly. Likewise, there also seems to have been some sort of currency component.

Per Bob Gay and Dan Neyer of the website Famous and Forgotten Fiction:

One leisure activity Jones mentioned on numerous occasions was his interest in board games. At some point in the post-war period, he invented a board game of his own called 'Interplanetary'. There is very little information about the game…Donald Tuck mentions it very briefly in The Encyclopedia of Science Fiction and Fantasy, simply describing it as '…a disc and counters game which has proved quite popular'. The game must have had some distribution of sorts, since Tuck uses the word 'popular', yet a second citation for the game, found in the 1998 American Game Collectors Association game catalog simply lists Jones' name and the name of the game with no information about manufacturer, distributor, etc. Possibly Jones marketed the game himself.

This game was created by Neil R. Jones in 1946. This piece is not cataloged in OCLC and we are aware of only four other surviving examples, all in private hands.

Neil Ronald Jones (May 29, 1909 - February 15, 1988) was an American science fiction author. Born in Fulton, New York, Jones was the last of four children born to Clarence E. and Esther Jones. Little is known about Jones's early life. His first published work was in the Fulton High School yearbook, followed by three short stories that appears in The Fayetteville Bulletin, a newspaper in Fayetteville, New York. It is unclear what Jones did professionally after graduating from high school, with some indications pointing to trading postage stamps. The first story Jones sold, entitled 'The Electrical Man' was not the first published. That honor fell to 'The Death's Head Meteor', which appeared in the January 1930 issue of Air Wonder Stories. 'The Death's Head Meteor' also holds the distinction of being the first use of the word 'astronaut'. Jones is most well remembered as the author of the Professor Jameson series. The first story in the series 'The Jameson Satellite' appeared in the July 1931 issue of Amazing Stories. Stories by Jones appeared in science fiction magazines throughout the 1930s, with the Professor Jameson stories proving to be the most popular. His career was put on hold by World War II, when he was drafted in May 1942 and served in North Africa, Sicily, and western Europe with the 14th Armored Field Artillery Battalion of the Second Armored Division. He married Rita Rees in Eastham, London, on June 19, 1945. Jones returned to the United States that fall and was discharged in October, but it is unclear when Rita arrived in the United States. Jones did not have any work published between 1945 and 1948 and found a job as an Unemployment Insurance Claims Examiner at some point in 1947. Jones's last science fiction story was published in in the early 1950s. Rita died on September 29, 1964, of 'self-inflicted stab wounds' to the neck. After Rita's death, Jones almost entirely disappears from the public record. He died on February 15, 1988, and was survived by his second wife Leona. Jones was buried next to Rita and illustrations the Professor Jameson series appear on the back of their tombstone. Learn More...