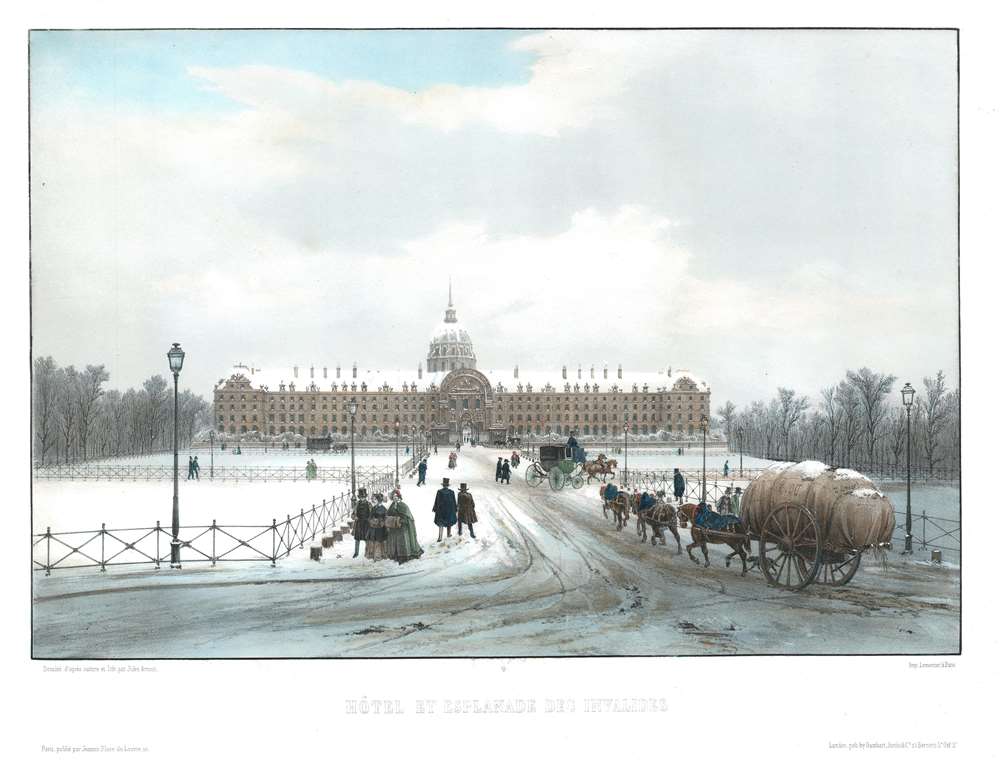 A beautiful view of Les Invalides in Paris, a complex of military buildings in the center of the city with an iconic dome.
$350.00

This is a c. 1845 Jules Arnout view of Les Invalides in Paris, France. Looking south across the Esplanade des Invalides, the view depicts the north façade of the Hôtel des Invalides, with Bruant's door and arched pediment easily recognizable below Hardouin-Mansart's chapel dome. Drawn after a snowfall in Paris, snow blankets the esplanade and the façade and dome of Les Invalides. A horse drawn cart moves slowly up the esplanade in the foreground, with several carriages evident further in the background. Wheel tracks weave their way through the slushy street, which are apparently well traveled since the sidewalks are still blanketed in a fresh snow. Also, pairs and small groups of people are illustrated wandering their way through the neighborhood.

Les Invalides, situated in Paris's posh 7th arrondissement, is a complex of buildings that today houses museums and monuments pertaining to the military history of France, along with a hospital and retirement home for French veterans, which was the complex's original purpose. Among the museums that are part of the complx are the Musée de l'Armée, the museum of the Army of France, the Musée d'Histoire Contemporaine, and the Musée des Plan-Reliefs. The tomb of Napoleon I is located in the Dôme des Invalides, along with those of other French war heroes. Work on Les Invalides began in November 1670 and construction was finished by 1676. The building was stormed by French revolutionaries on July 14, 1789, who took rifles and cannons from its cellars that were then used to storm the Bastille that same day. Les Invalides was also the site of the degradation of Captain Alfred Dreyfus in December 1894, and his subsequent rehabilitation in 1906.

This view was drawn Jules Arnout 'd'après nature', which implies that he sketched the view while sitting in front of the Les Invalides, printed by the Lemercier firm, and published by Henri Jeannin c. 1845. We are aware of only one example in institutional collections, which is part of the collection at the Musée Carnavalet in Paris, which is in black and white.