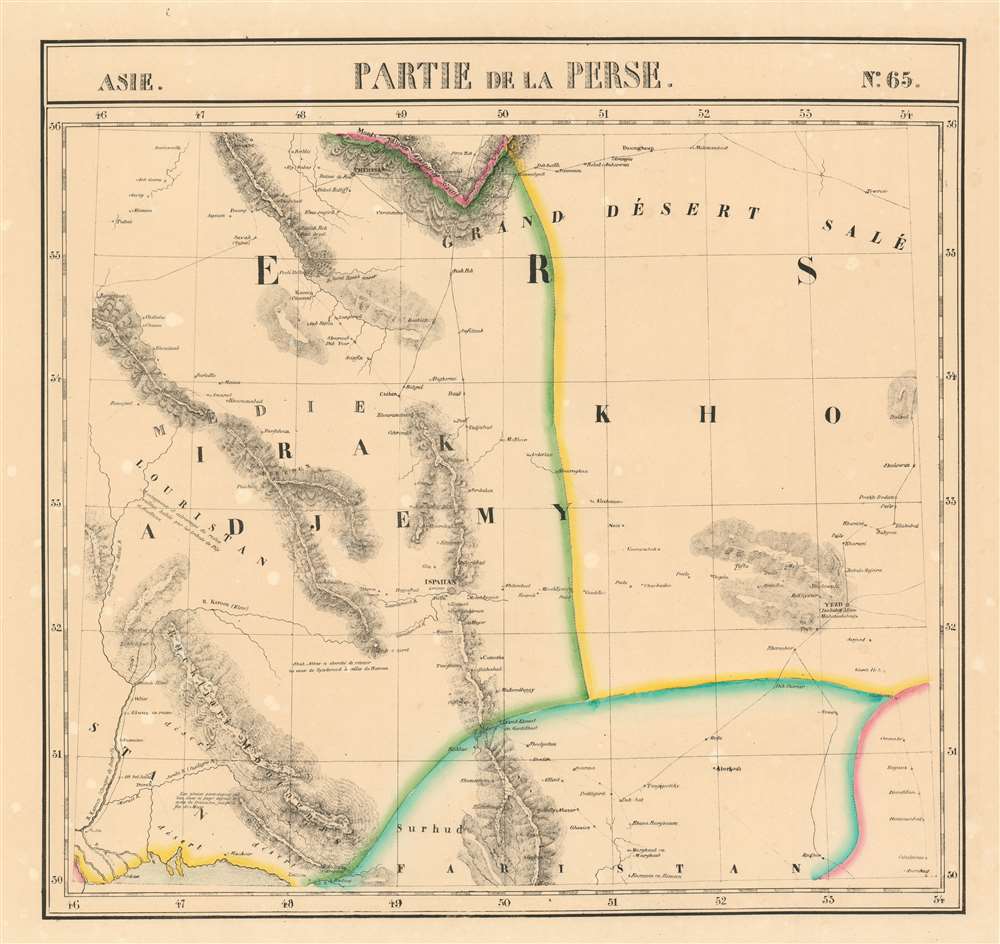 This is the 1827 Vandermaelen map of northwestern Iran. At the bottom right can be seen the northern shore of the Persian Gulf, and the city of Bandar Mahshahr (Mashoor on the map). The Karun River (Karoun on the map) also appears. The city of Ahwaz is shown - noted here to be in ruins, because the city had been devstated in the 14th century during Mongol invasions: by the 19th century, barely a village remained amongst the ruins of its once-great sugarcane plantations. Indeed, the map is sufficiently well-informed that many recognizable place can be found. Shooshtar (Shuster on the map,) Khorramabad and other Iranian cities appear in the west. The map reaches as far north as the Alborz mountains, just north of Tehran, which is also shown. Isfahan is shown centrally, with the note of its population of 200,000. The map extends eastwar include much of the desert beyond Yezd. Somewhat confusingly to modern eyes, the western portion of the map is labeled 'Irak Adjemy,' enclosing both Tehran and Isfahan well to the east of what we now consider Iraq. In this case, it is not a contradiction: Irak Adjemy was a northwestern province of Persia at the time this map was produced.

First Map to Focus on the Region

Like many of Vandermaelen's maps, this is the first large-scale atlas map to focus on the area it depicts, and the first to be executed in lithography. The map's detail - drawn from the first-hand exploration of John Macdonald Kinneir on behalf of the British East India Company - would not be improved upon until the First Anglo-Afghan war. Kinneir's travels in Persia were brough on with the explicit intent of understanding what the British viewed as the borderland between British interests in India, and the encroachments of the Russian empire.

Vandermaelen, P. Atlas universel de geographie physique, politique, statistique et mineralogique (Bruxelles, Vandermaelen) 1827.     Atlas Universel de Geographie. This great work, featuring some 378 unique maps and compiled over three years, was the first lithograph atlas, and the first to render the world on the same projection and at a uniform scale. It was no doubt Vandermaelen’s training a globe maker that led him see the need for an atlas rendered uniformly so that all bodies could be understood in relation to one another. As a result, many newly emerging areas received more attention than prior efforts. Maps of the American West, in particular, benefited: ‘no mapmaker had previously attempted to use such a large scale for any western American area.’ (Wheat). Central and South Asia also appear in sharper focus. Despite Vandermaelen’s reliance upon existing sources, his maps very frequently provided the clearest depictions available of many poorly-understood parts of the world. The atlas was an expensive production, costing $800 in 1827. Subscription lists indicate that only 810 full sets of the atlas were sold. It was printed on high-quality paper with superior hand coloring and was engraved in a clear, legible style. Conjoined, the maps of Vendermaelen's atlas would create a massive globe some 7.75 meters in diameter, a feat which was accomplished at the Etablissement Geographique de Brussels.

Rumsey 2212.097 No physical copies in OCLC.
Looking for a high-resolution scan of this?