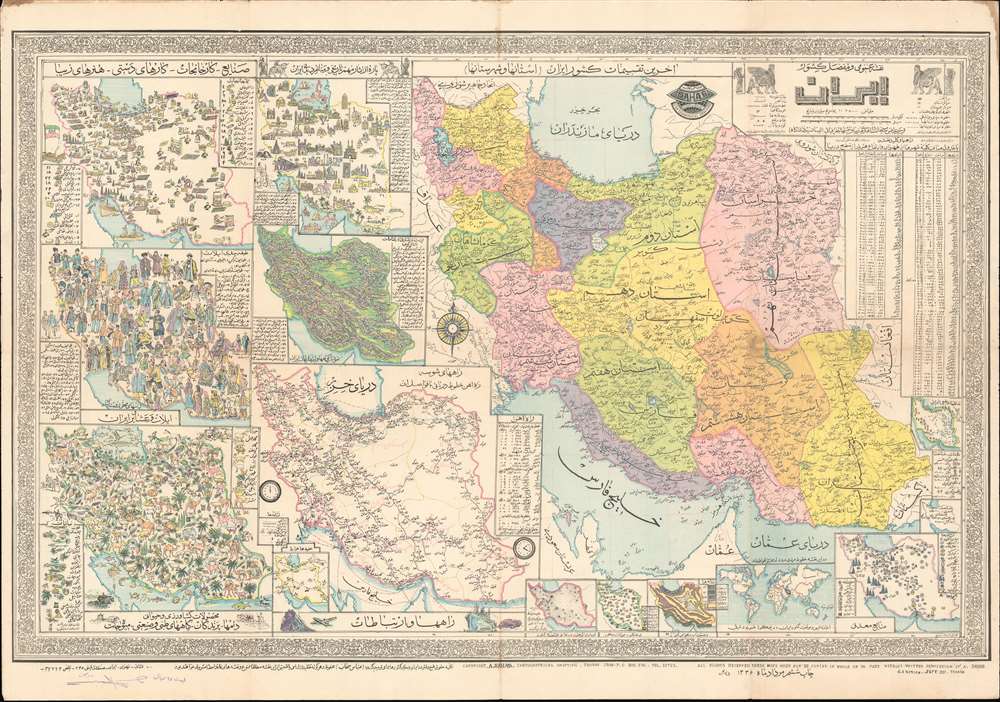 This is a 1957 Addass Sahab map of Iran, in the rare Farsi (Persian) edition. The map depicts Iran in full, from Iraq and Turkey to Afghanistan and Pakistan and from the Caucasus, the Caspian Sea, and Turkmenistan to the Persian Gulf and the Gulf of Oman. Issued under the Shah, long before the Iranian Revolution, this map represents a golden age for Iran, when liberal reforms were going into effect, and Iran itself was an attractivce destination for both tourists and business. Using inset maps of varying size, Sahab illustrates political, cultural, historical, and economic aspects of Iran. A large political map highlighting the ostans, provinces, shahrestans, and townships within the country occupies the right half of the sheet. Each ostan is shaded a different color, and further subdivided into provinces and other administrative districts. Many cities, towns, and villages are labeled, including Tehran, Isfahan, and Shiraz.

On the left side of the sheet, a series smaller maps of varying size illustrate different aspects of Iranian society and culture. Starting at the top left, a pictorial map traces Iranian industry and factory production using different symbols for each industry, factory, or handicraft. Chemical factories, canneries, cotton gins, oil industry facilities, and other factories producing cigarettes, sugar, and leather are highlighted here, as well as carpet making, perfumeries, and artists. To the right of the industrial map is a pictorial map of Iran's historical monuments and other interesting sites. Many different sites are numerically identified, illustrated in profile, and identified in the text boxes along the left and right sides. Perhaps emphasizing the tourist industry, holiday-makers in bathing suits are illustrated in the Caspian Sea. Below these two maps sits a pictorial map of traditional Iranian tribal costumes that illustrates the costumes of sixty-five different tribes. Next to this map is a topographical relief map detailing Iran's topography and naming fifty-eight mountain peaks. Below these two maps, along the bottom border, a pictorial map depicts Iranian flora and fauna. To the right, a map traces Iran's rail network. A very small inset map in the lower left corner illustrates Iran's air routes.

Small Maps in the Right Corner

A small inset map of the world is included along the bottom border and is meant to show where Iran is in relation to the rest of the world. Yet another inset map, in the lower right corner, highlights Iran's mineral wealth, identifying deposits of aluminum, gold, iron, oil, salt, marble, and copper, among others. Two small inset maps situated along the right side provide general information about Iran and its forested region. The whole is surrounded by a pictorial border.

This map was created by Addas Sahab and published in Tehran in 1957. Several different editions were published beginning in the mid-1950s and continuing through the early 1970s. These include editions in English and Farsi, as here. The Farsi editions are far less common and rarely seen on the market. An example of this map is cataloged in OCLC as being part of the collection at the University of Michigan. We are aware of one other example in private hands.

Addass Sahab (1921 – April 2, 2000) was an Iranian cartographer and publisher active in Terhan in middle part of the 20th century. He is considered the 'Father of Iranian Cartography.' Sahab was born in Fam, Tafresh district, Iran. He was the son of Ostad Abolghasem Sahab Tafreshi, an Iranian writer, publisher and, from 1935, founder of the Sahab Drafting and Geographic Institute.This was the first private geographical publisher in modern Iran. The company was soon passed to Addass, under whose guidance the company published over 1500 works, including maps, atlases, prints, and scientific and medical illustrations. Addass himself traveled throughout Iran, often mapping individual towns and adding his own artistic flair to the maps. His most important maps illustrate Tehran, Esfahan, and Mazandaran. He also traveled extensively abroad, producing maps of Afghanistan, Pakistan, Iraq, and Turkey. After his death, the Sahab Drafting and Geographic Institute was taken over by his sons and remains an active concern to this day. Learn More...