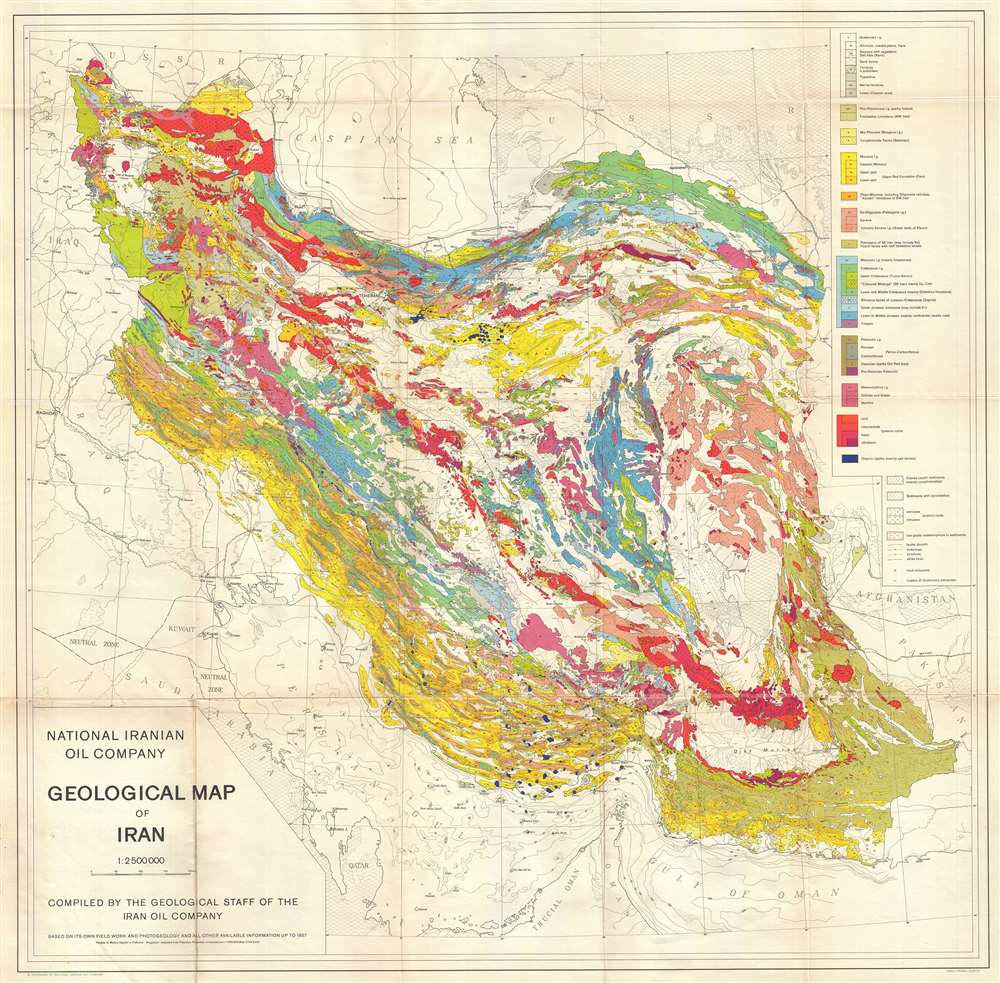 The first scientific geological survey of Iran - and an all around stunning map.

An extremely rare, beautiful and important production, this is the 1959 geological map of Iran issued from original surveys by the National Iranian Oil Company (Shirkat-i Millī-i Naft-i Īrān) completed in 1957. This is the first detailed geological survey of Iran and one of the most important modern cartographic works of that country. The map covers all of Iran, Kuwait, Bahrein, and Qatar, as well as parts of adjacent Iraq, Afghanistan, Saudi, Arabia, Oman, and Pakistan. The focus of the map is of course Iran, which is spectacularly color coded to identify different soil and rock types through the country. Additionally, it features depth soundings (fathoms) in the Persian Gulf. the Gulf of Oman, and the Caspian Sea. The map also identifies the Saudi-Iraqi Neutral zone established by the Uqair Protocol of 1922. The work was produced based upon extensive field work, photogeology, and earlier small-scale geological studies.

When this map was printed the Iranian National Oil Company, although ostensibly nationalized, was a multinational concern operated by a London holding company, the Iranian Oil Participants Ltd. (IOP). It was under the IOP that the detailed national geological survey underlying this map was completed. All IOP assets were sized during the Islamic Revolution of 1979 and the Islamic Republic took full control of the national oil operations.

This map was printed in Zurich by Orell Füssli and is copyrighted by the National Iranian Oil Company. Few examples of the map survive.

Orell Fussli (1519 - present) is a Swiss Zurich based printing house bookseller. The firm was founded in the 16th century by Christoph Froschauer (c. 1490 - April 1, 1564). Froschauer was the first printer in Zurich, best known for his publication of an important German translation of the Zwinglian Bible, known today as the Froschauer Bible. While Froschauer died of the plague in 1565, his nephew Christoph Froschauer the Younger (1532–1585) took over the business. The firm continued to prosper through the centuries under the management of the Froschauer and their heirs. From 1793 to 1794, Orell Füssli published Marianne Ehrmann's Die Einsiedlerinn aus den Alpen, the first magazine published by a woman in Switzerland. From 1911, the firm was contracted to print banknotes of the Swiss National Bank. Today the firm is a publicly traded diversified industrial and trading group with important patents on security printing. Still based in Zurich, they also continue to publish books and maintain numerous retail locations. Learn More...