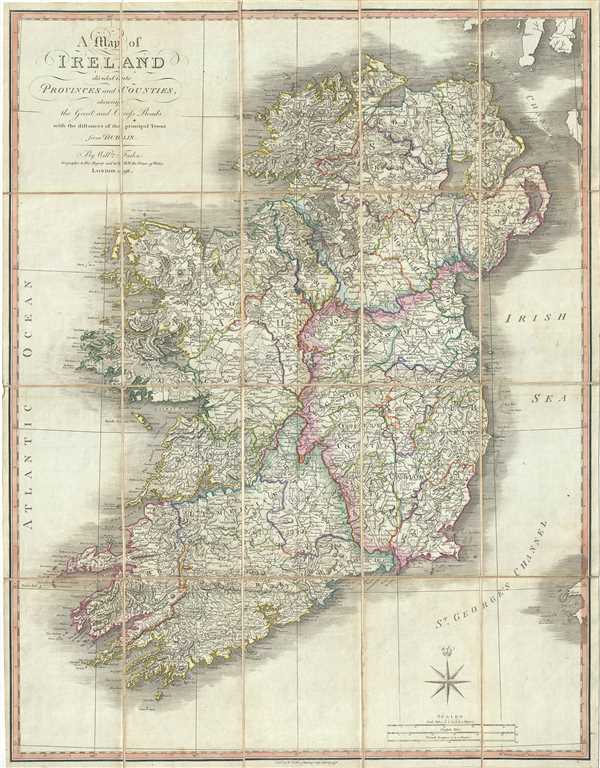 This is an attractive 1798 map of Ireland by William Faden. It depicts the emerald isle in its entirety, divided into counties and provinces. It covers the four provinces, which remain the same to this day. In the north is Ulster, Connaught in the west, Leinster in the east and Munster in the south. Leinster is comprised of Carlow, Dublin, Kildare, Kilkenny, Laois, Longford, Louth, Meath, Offaly, Westmeath, Wexford and Wicklow. Munster is made up of Clare, Cork, Kerry, Limerick, Tipperary and Waterford. In Connaught are Galway, Leitrim, Mayo, Roscommon and Sligo. Antrim, Armagh, Down, Fermanagh, Londonderry, Tyrone, Cavan, Donegal, and Monaghan make up Ulster. The map also notes major roads, river ways, mountains and other topographical features. Also notes the distances of the principal towns from Dublin. Off the coast, Faden makes note of various shoals. This map, issued as a folding pocket map was published by William Faden in 1798.

Very good. Dissected and mounted on linen. Accompanied with original cardboard binder.
Looking for a high-resolution scan of this?