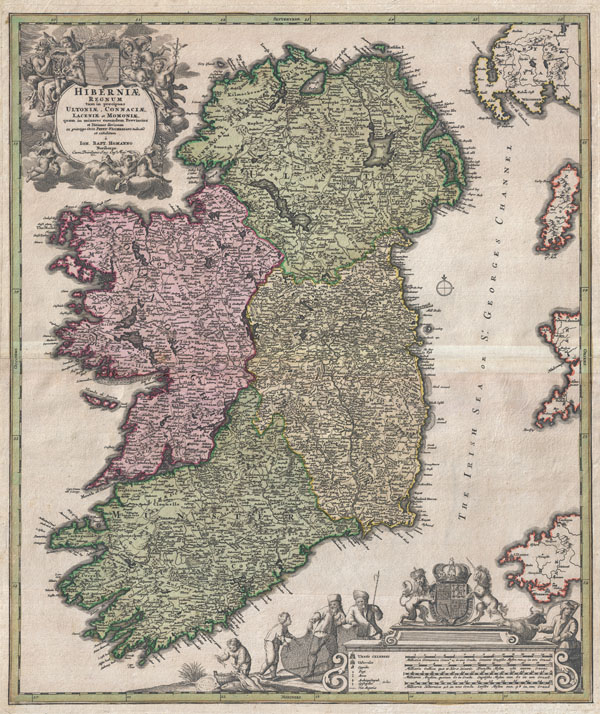 An iconic c. 1716 map of Ireland by Johann Baptist Homann. A fine example of Homann's work, this map bears all of the distinctive hallmarks of Homann's style at the height of his career: a strong dark impression, heavy yet detailed engraving work, elaborate allegorical title cartouches, and a rich but tasteful application of color. The prototype of this map was drawn in 1689 by the Amsterdam cartographer Nicholas Visscher II, who Homann credits in the title cartouche. Visscher's map became the model for most future maps of Ireland well into the late 18th century. Homann revised and updated this map to reflect early 18th century changes to the island. Here Ireland is divided into its four provinces, Munster, Connought (Connacht), Leinster (Lenister) and Ulster, then subdivided into numerous counties. Roads, mountains, forests, swamps, rivers, lakes, bridges towns, and even some offshore details are noted. The elaborate title cartouche in the upper right is rich with Gaelic iconography, including the Gaelic Harp and allegorical representations of Pan, a Celtic adaptation of the Roman god Bacchus, and Brigit, the Celtic goddess of poetry, healing and agriculture. Another cartouche in the lower right hand quadrant frames the map's key and four distance scales. Here we see four fisherman pulling in the day's haul, a clear nod to Visscher, who's Dutch name translates to 'Fisherman.' Above the map key itself is the royal crest of the United Kingdom, who at the time laid claim to Ireland. This map was published in various editions from about 1710 to 1750. The addition of Homann's Privilege to the title cartouche suggest this may be the second state of this map, published sometime between 1715 and Homann's death in 1720. In all a fine map example of Homann's work and an important and influential map of Ireland.