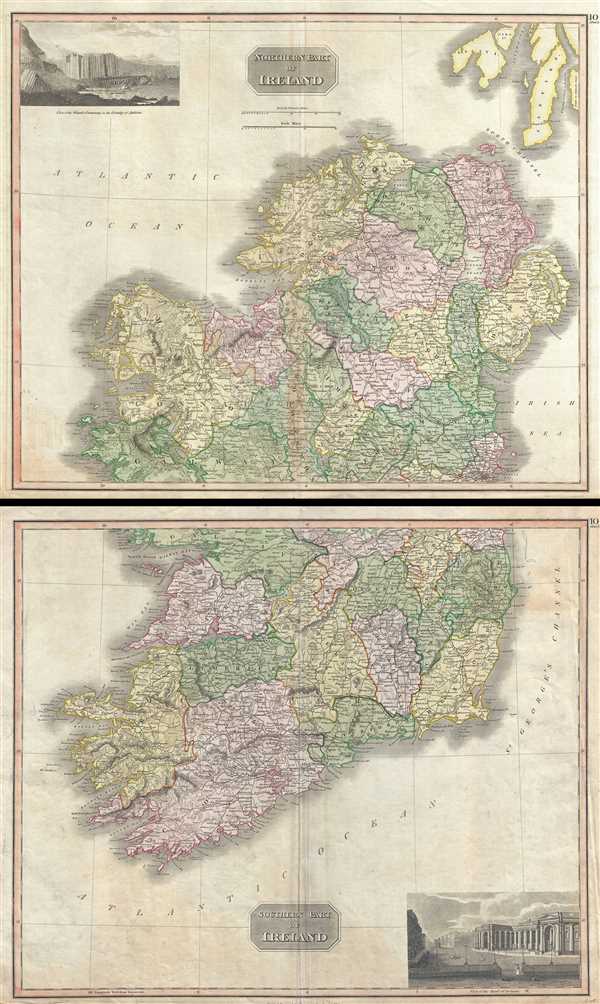 A set of two maps depicting Ireland during the early 19th century.

This is an attractive set of the 1817 maps of Ireland by John Thomson. Essentially two separate maps, the first map (image top) depicts Northern Ireland while the lower map depicts the Southern portions of Ireland. The whole is beautifully engraved in the minimalist English style pioneered in the London and Edinburgh during early part of the 19th century. Together, the maps depict the entire Emerald Isle, divided into 32 counties, covering from Donegal in the north to Cork in the south. Towns, rivers, mountains, railroads, and various other important topographical details are noted. Elevation throughout is rendered by hachure and political and territorial boundaries are outlined in color.

In 1801, the island of Ireland became part of the United Kingdom of Great Britain and Ireland. Though Britain flourished during the 19th century, Ireland suffered a series of famines, the worst being the Great Irish Famine, which lasted from 1845 - 1849 and killed about a million people. As a result Ireland experienced a widespread exodus - mostly to the United States. By the end of the 19th century, almost 50% of immigrants into the United States hailed from Ireland. Overall, a beautiful set prepared by John Thomson for inclusion in the 1817 edition of Thomson's New General Atlas. Note: The image above represents two separate sheets.

Very good. Set of two maps. Minor wear and verso repair along original centerfolds. Original platemarks visible. Foxing and toning at places.
Looking for a high-resolution scan of this?