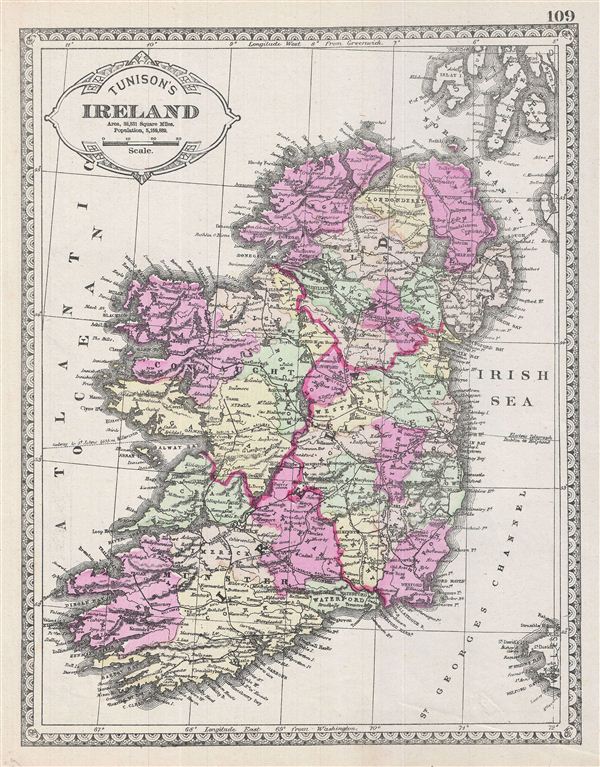 This is a beautiful example of the 1887 Tunison map of Ireland. The map covers the emerald Isle in full from Donegal to Cork. Ireland is divided into its four primary provinces, Munster, Ulster, Connaught and Leinster. During the 19th century, Ireland suffered a series of famines, the worst one being the Great Irish Famine, which lasted from 1845 – 1849 and killed about a million people. As a result it witnessed a widespread exodus. By the end of the 19th century, almost 50% of immigrants into the United States were from Ireland. The map is highly detailed with color coding at county level. Various towns, cities, rivers, roads, railways, and various other topographical details are noted. Published as plate no. 109 in Tunison's Peerless Universal Atlas.

Henry Tunison (fl. c. 1886 – 1909) was a late 19th century American map publisher and businessman based in Illinois. Tunison published the Peerless Universal Atlas in various editions from 1886 to 1909. Unlike his competitors, the Rand McNally Company and George F. Cram, who printed low quality atlases using printed color, Tunison utilized old world publishing techniques and distinctively vivid hand color to drive the sales of his popular atlas. Because of this, Tunison’s maps, though late of period, remain desirable among collectors. Little is certain regarding Tunison’s early life; however, it may be one Henry Tunison whose family immigrated to Illinois from New Jersey in 1838.

Very good. Map of France on verso. Minor damage and verso repair in bottom right quadrant.
Looking for a high-resolution scan of this?