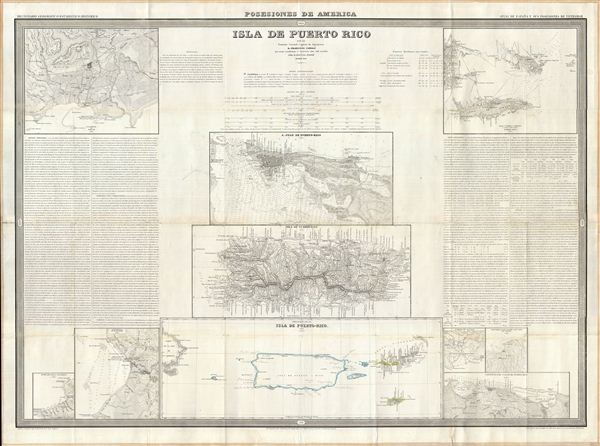 A fine example of Francisco Coello de Portugal y Quesada's massive map of Puerto Rico. Coello's map is the first scientifically produced Spanish map of Puerto Rico. The map is essentially ten individual maps on a signal sheet with extensive historical and statistical annotation. This sheet details Puerto Rico, San Juan, and eight other maps of ports, neighboring islands and important geographical features. Longitude is measured from Madrid. The 19th century was a period of great change for Puerto Rico and witnessed the abolishment of the slave trade, the 1851 founding of the Royal Academy of Belles Letters, the introduction of wired communication, and the rise of the Puerto Rican sovereignty movement. Engraved by D. Juan Noguera in Madrid as map no. 41 for Coello's unfinished opus Atlas de España y sus posesiones de Ultramar.