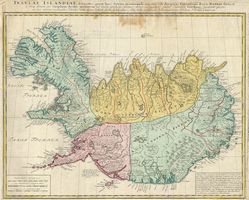 This is a rare and spectacular 1761 Homann Heirs map depicting Iceland. Fine map of this region compiled according to Danish surveys. Lovers of Icelandic sagas will recognize many of the towns and cities noted.

Very light almost invisible waterstain on the upper border, else fine condition. No centerfold
Looking for a high-resolution scan of this?