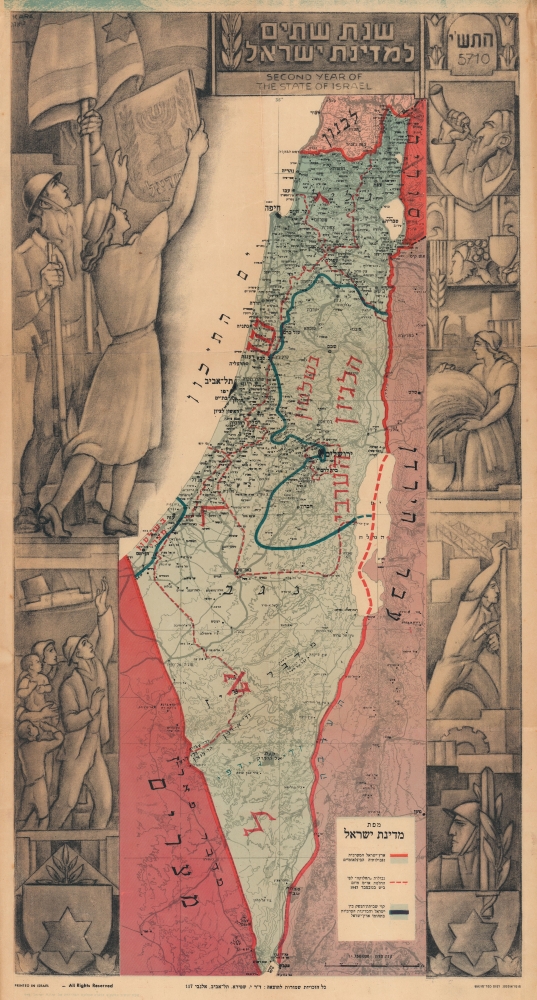 A rare and striking 1950 Joseph Szapiro (Shapiro) Zionist map of Israel in Hebrew, with striking Social Realist imagery, celebrating the second anniversary of Israel's 1948 founding. The map depicts the region from the Mediterranean Sea to Jordan (Transjordan) and Syria and from Lebanon to Egypt and the Gulf of Eilat (Gulf of Aqaba). Highly detailed, cities, towns, and villages are labeled throughout, with Jerusalem and Tel Aviv given prominence.

The map's most striking feature is the elaborate decorative art embracing the map proper. The surround is the work of Israeli artist Michael Kara, one of the pioneers in the development of a distinctive Israeli art movement in the late 1940s - 1950s. It contains elements inspired by Russian Social Realism, among them farm and construction workers, as well as Zionist tropes, including immigrant families, Jewish iconography, and a soldier and young women holding aloft the flag. Socialist ideology would go on to play a significant role in the development of the Israeli state, influencing, among other things, the rise of the Kibbutz System.

The Moving Boundaries of Israel

Three different sets of boundaries are depicted. The international boundaries of Palestine, from before the state of Israel was founded, are illustrated by thick red lines. The boundaries of the 'partition plan' of November 1947 are shown by thin dashed red lines. The third and final set of boundaries are those created by the armistice that ended the 1948 Arab-Israeli War, now known as the Green Line. These territories are the West Bank and Gaza Strip, which are now part of Israel. This map provides a visual summary of the creation and growth of Israel during its first two years of existence.

This map was created by Michael Kara and Joseph Szapiro / Shapiro and printed by Kfar Monash Printers in Tel Aviv, Israel. It was initially issued as a supplement to the Davar newspaper. There are at least two states of the map, one in English, and another in Hebrew. Our research suggests that the Hebrew version, as here, issued in 1950, is the later of the two and that the 1949 English variant preceded the Hebrew version. This map is rare. While it appears from time to time on the market, we note holdings in only one institutional, the National Library of Israel.

Joseph Shapiro (יוסף שפירא) (1900 - December 4, 1967) also spelled Josef Szapiro, was a Polish-Israeli publisher and cartographer active in Israel in the middle part of the 20th century. Shapiro was born in Łódź, the part of Russian Poland. He studied at the Hebrew school in Łódź, then moved on to study economics and philosophy at Mannheim and Heidelberg, Germany, receiving a doctorate from Heidelberg in 1924. He immigrated to Eretz, Israel, in 1935. He began his own publishing interest around 1940, publishing maps and atlases of Israel - often covering the various wars and most up-to-date events. His final work was a series of maps illustrating the Six Day War (June 5, 1967 - June 10, 1967). His wife, Esther Lurie (1913 - 1998), was a prominent painter. When he died of a heart attack in 1967, the publishing business passed on to his son, Shaul Shapira (1947 - ????). Learn More...


Michael Kara (מיכאל קָארָה; September 3, 1887 - February 13, 1964) was a Ukrainian-Israeli sculptor, painter, and graphic designer. Kara was born in Berezhany, then part of Austria, now part of the Ternopil Oblast, Ukraine. When he was 16, his father, an officer in the Austro-Hungarian army, was redeployed to Budapest. There the local Jewish community recognized his artistic talents and supported him at the Budapest Royal Academy of Arts. In 1905, he won the academy's first price for a self-portrait. Receiving a Royal scholarship, he continued his studies at the Florence Academy of the Arts. Returning to Budapest in 1913, he was a professor of art to 1919. In 1919, he participated in the communist revolution of Béla Kun, helping to establish the ephemeral Hungarian Soviet Republic. When the republic collapsed, 113 days later, he was sentenced to death, but managed to escape to Romania. In 1922, he became the court artist to King Ferdinand I of Romania. After Ferdinand I died, he relocated to Yugoslavia, setting in modern-day Novi Sad, Serbia, where many of his sculptures still stand. When the Balkans fell into instability he moved to Italy, settling in Milan in 1936. When the fascists came to power and anti-Jewish sentiment began to rise, he fled to the mountains of norther Italy, where he joined anti-fascists partisan groups. After the World War II (1939 - 1945), he relocated to Eretz, Israel to live with his son, who moved there about 7 years prior. Kara became a leading figure in the developing a distinctive Israeli art movement. His work was widely exhibited throughout Israel and highly regarded fort both its technical talent and meaningful imagery. Kara died of a heart attack in February 1964, in the 77th year of his life, a few days before his trip to the United States for the opening of an exhibition of his work in Los Angeles. He is buried in the Kiryat Shaul cemetery. Learn More...


Kfar Monash Press (דפוס כפר-מונאש, May 1946 - Present) is an Israeli printing establishment active in the middle of the 20th century. The printing division is an integral part of the Kfar Monash Moshav - a cooperative community located in central Israel on the Sharon Plain. It was formed by Jewish-Australian engineers in the mapping division of the British Royal Engineer Corps in northern Libya. It was named after its Jewish-Australian general and civil engineer, John Monash (1865 - 1831). Like most Moshav, it was initially a farming community, but the highly trained engineers also established a photolithographic press. The moshav and press still operate. Learn More...