1883 Stanford Map of the Isthmus of Kra, Thailand (Siam) and Burma 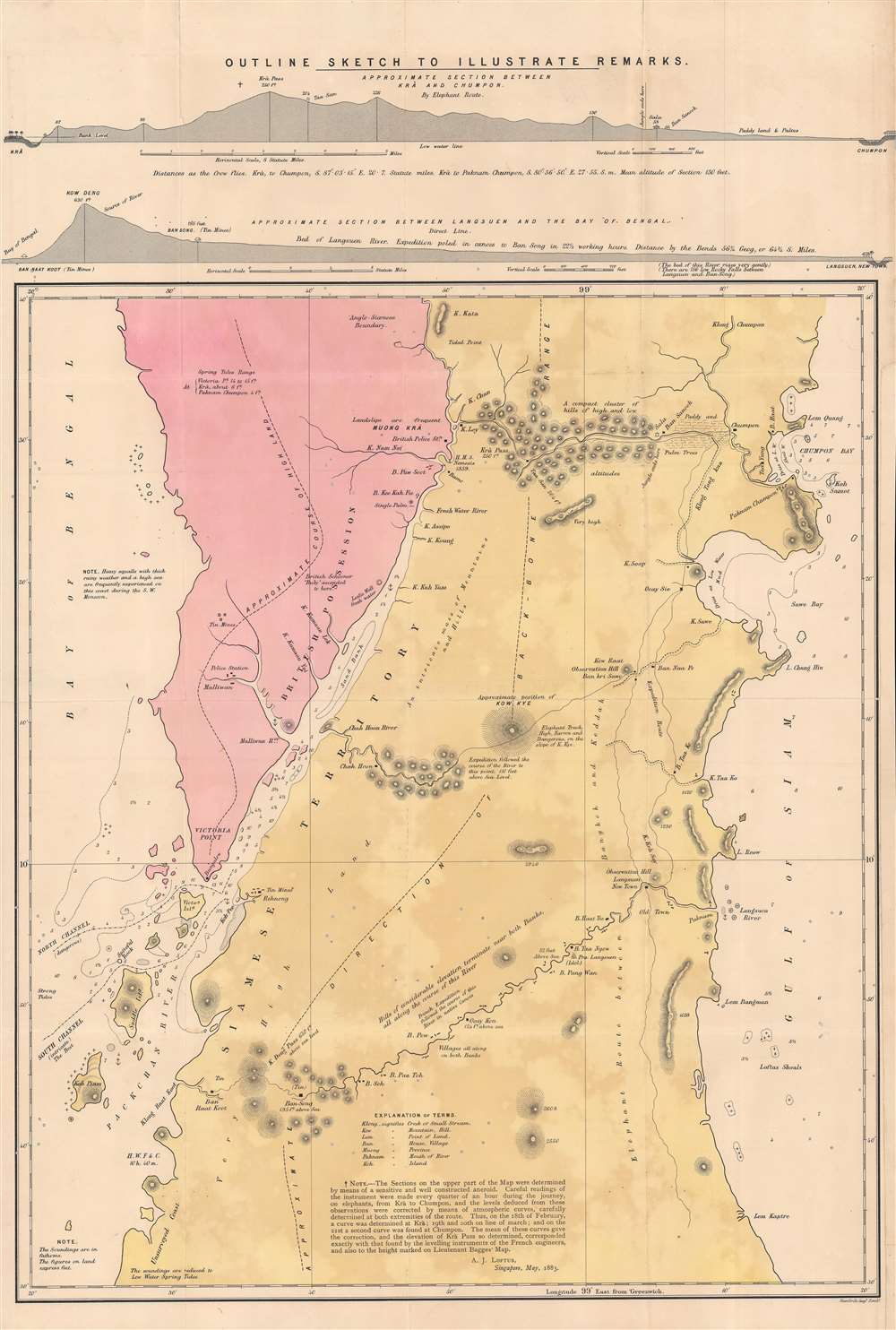 1883 Stanford Map of the Isthmus of Kra, Thailand (Siam) and Burma

This is a scarce 1883 folding map of the Isthmus of Kra, including the border between British Burma and Siam, and its surrounding waters that appeared in Alfred John Loftus' book Notes of a Journey across the Isthmus of Kra. Although remarkably detailed in some respects, it also demonstrates the challenges in surveying the dense jungle and mountain terrain.

The difficulties of traversing the waters and terrain are evident, both in what is included as well as what is excluded. On the water, hazards, sand banks, and shallow water are omnipresent, and Loftus provides notes about the dangers of the Kraburi River. Periodic comments provide additional information on weather and tides. On land, Loftus was forced to approximate the location and course of mountain ranges which were too difficult to cross (using the methods described in a note at bottom).

Two cross-sections of routes across the isthmus are included at top, one depicting the elevation changes between Kra and Chumphon when traveling by elephant, and the other being a similar illustration of an area further to the south on the isthmus, between the Bay of Bengal and Lang Suan (Langsuen) on the Gulf of Siam. Notes on land provide additional interesting details, such as the location of a British police stations guarding the 'Anglo-Siamese Boundary,' and the anchorage of the H.M.S. Nemesis in 1859 (Royal Navy ship, not the more famous East Indiaman).

Loftus had joined a French survey expedition which travelled up the Lang Suan River, which allowed for its course to be relatively well mapped. Even today, this area is quite remote and a significant portion of it has been set aside as a national park land (Namtok Ngao and Lamnam Kra Buri National Parks); Ranong (Rehnong), noted here for its tin mines, and Chumphong (Chumpon), are the largest towns.

As far back as the 17th century, proposals have been made to build a canal across the isthmus, but practical difficulties and British opposition (meant to protect the importance of Singapore) prevented these plans from being realized during the 19th and 20th centuries. In recent years, the notion has been revived as part of China's 'maritime silk road,' but opposition both within and outside of Thailand have prevented forward progress.

This map and chart was printed by Stanford's Geographical Establishment in 1883, for inclusion in Alfred John Loftus' book Notes of a Journey across the Isthmus of Kra. It is only independently cataloged with the National Library of Singapore and is very scarce to the market, while Loftus' entire book is distributed among major research universities in North America, the United Kingdom, Australia, and Southeast Asia.

Loftus, Alfred John, Notes of a journey across the Isthmus of Kra, made with the French government survey expedition, January-April, 1883..., (Singapore: Singapore and Straits Print Office) 1883.