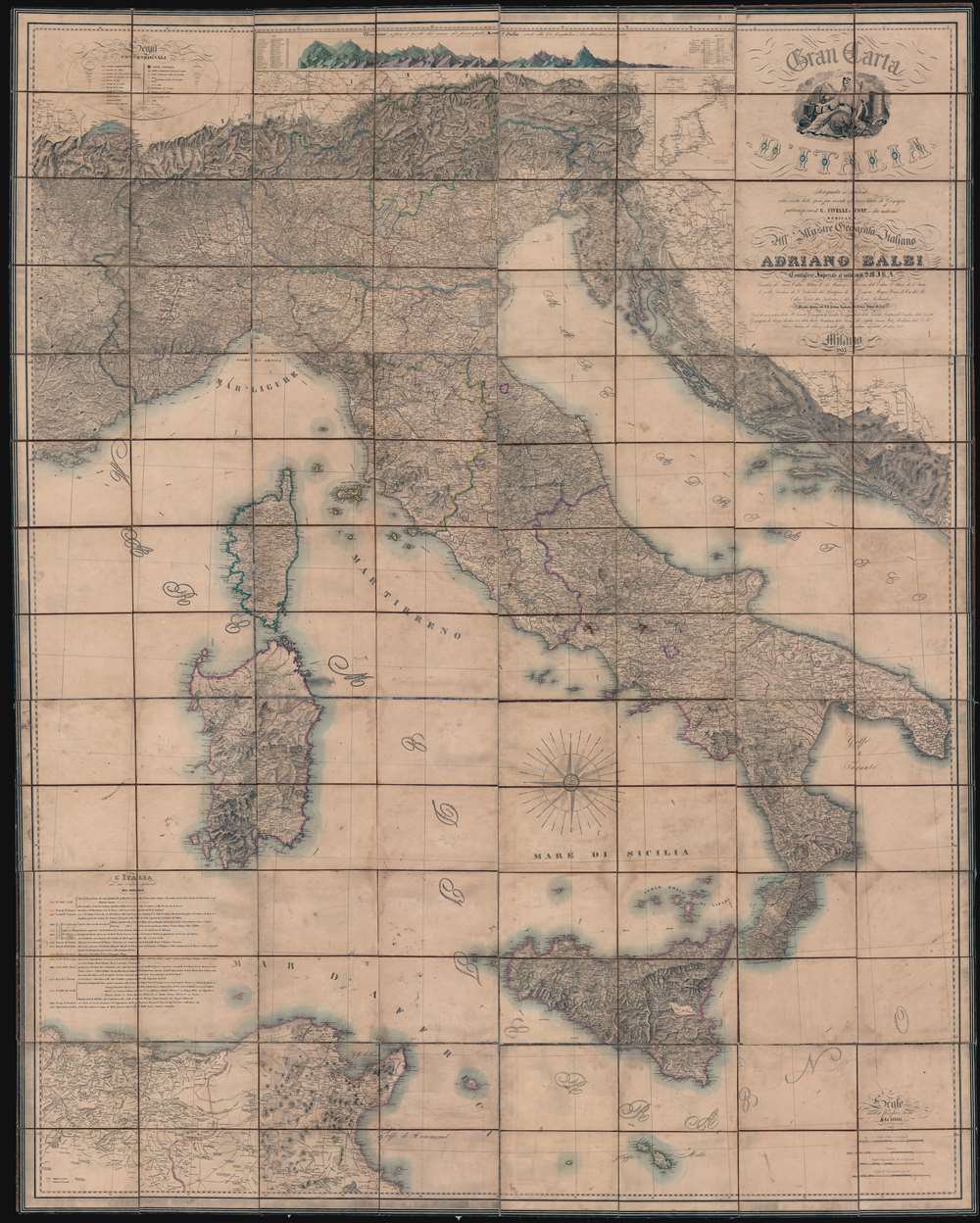 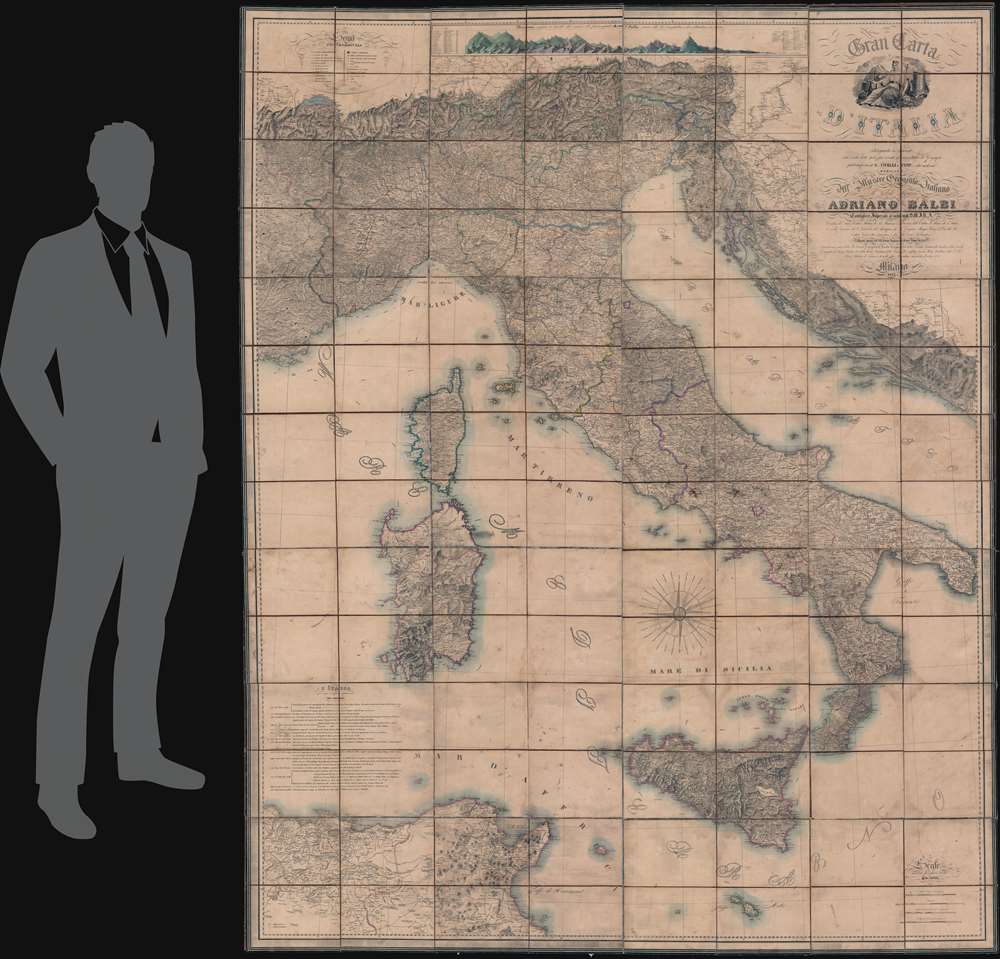 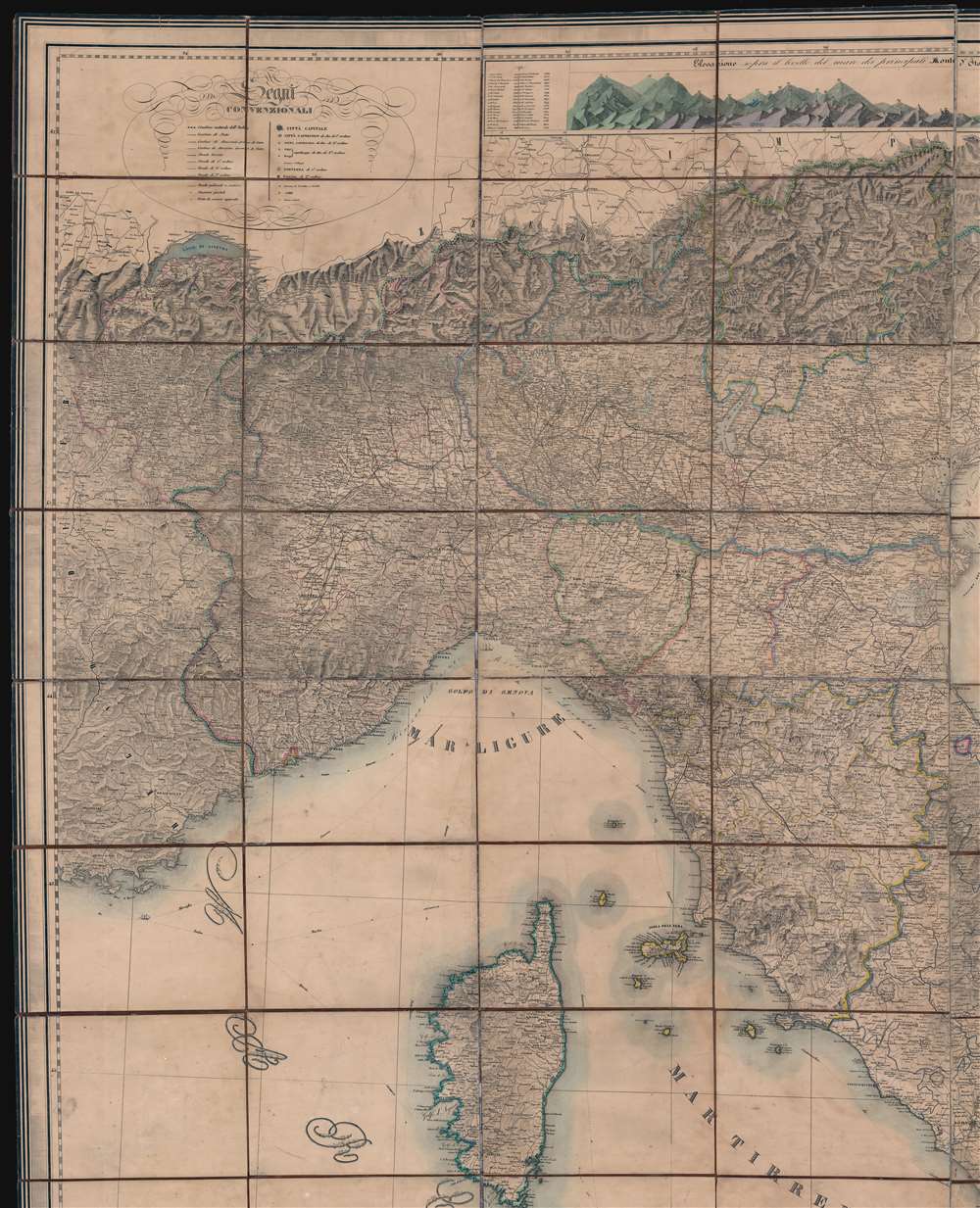 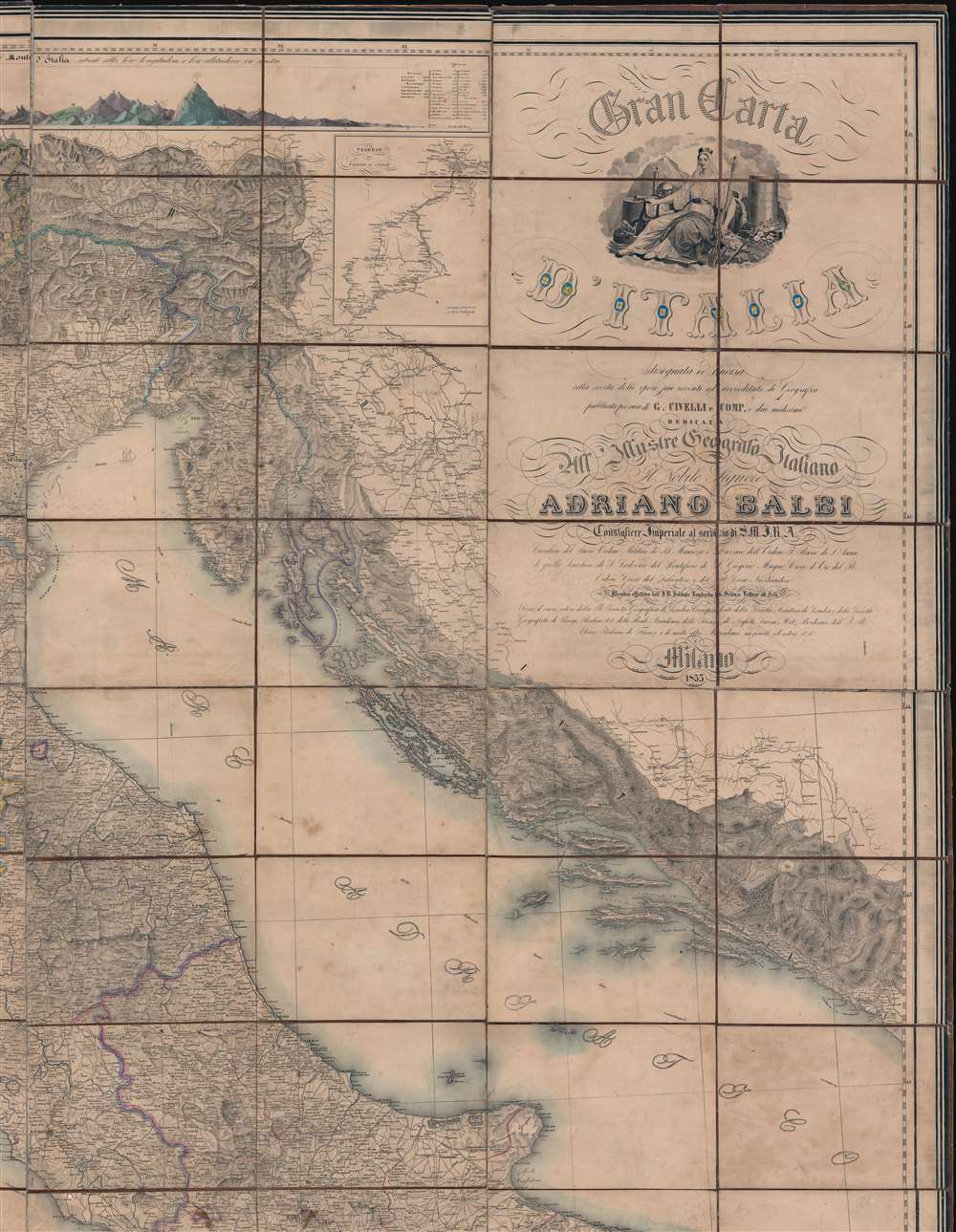 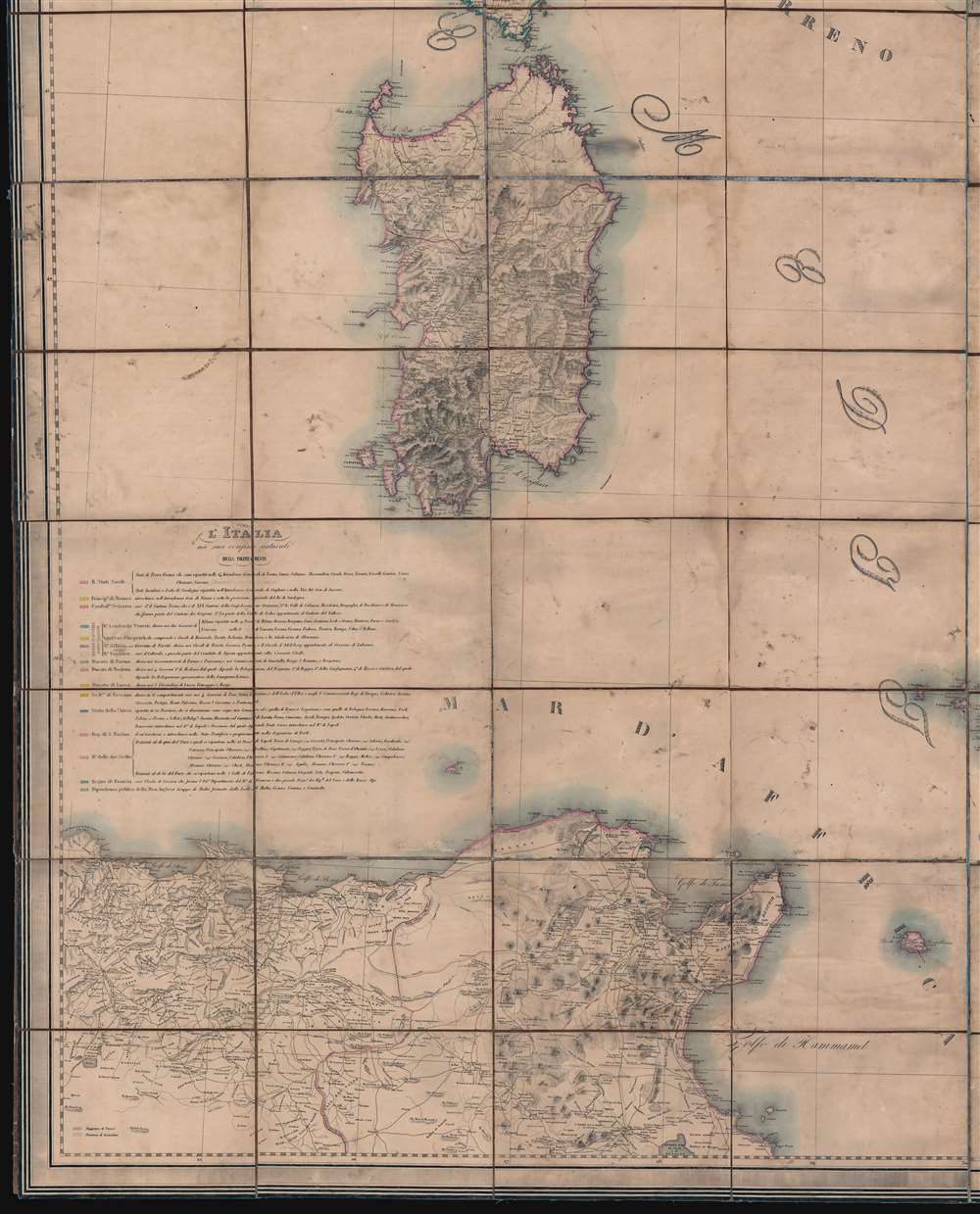 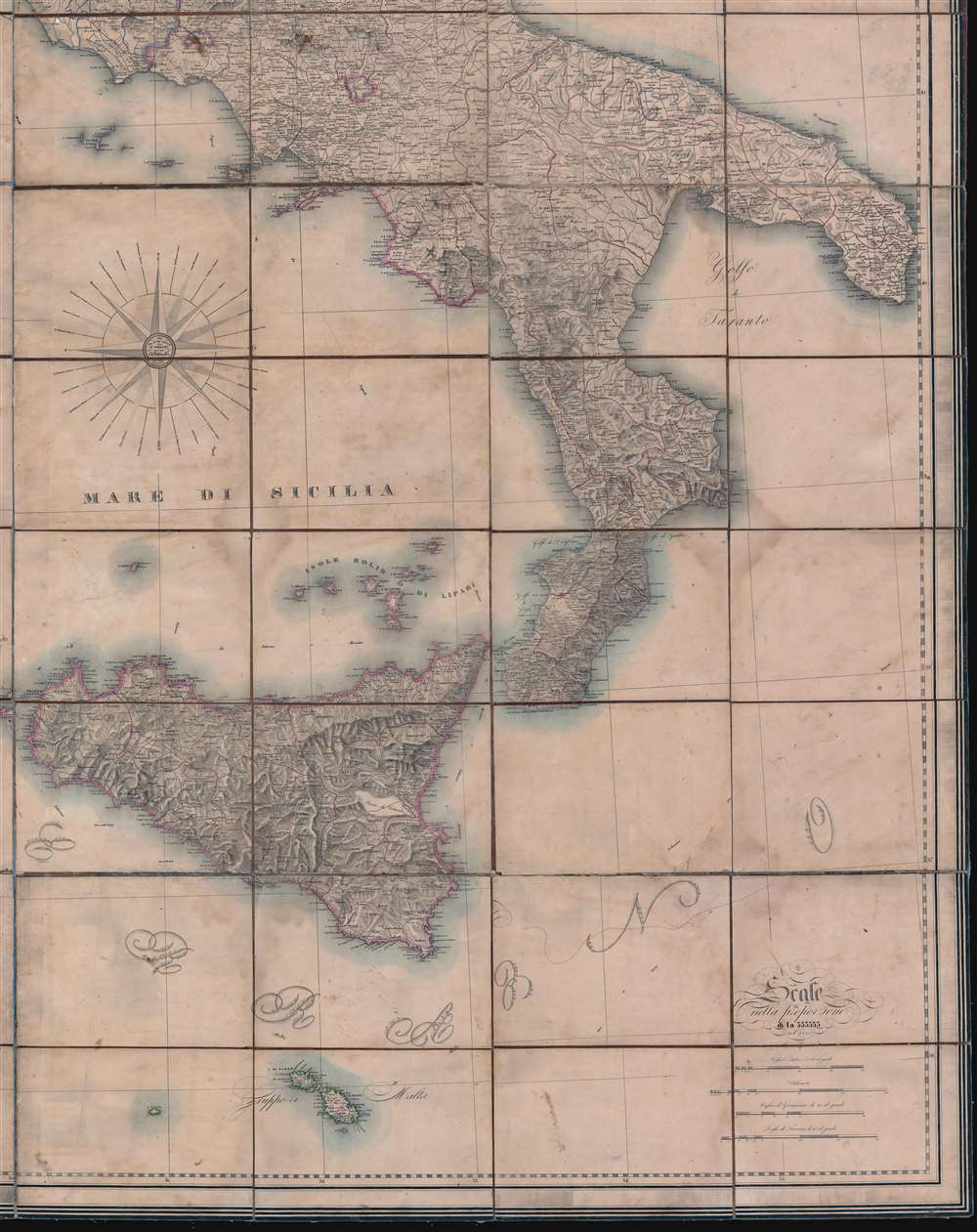 One of the largest commercial maps we have seen.

A truly 'ginormous' production, this is Giuseppe Civelli's great map of Italy, here in its 1853 edition. The map measures nearly 100 inches high and 80 inches wide, making it one of the largest maps we have seen. This map was issued in the early days of the Italian Risorgimento (1848 - 1871) and can be seen as a unique symbol aspiring to a newly ascendant sense of shared Italian national identity. The map embraces the whole of the Italian peninsula and Sicily, as well as Corsica, Sardinia, Dalmatia, Malta, North Africa, and the northern Italian states. Along the top of the map, there appears a detailed comparative elevation chart. Throughout the detail is staggering, making this great work the finest map of Italy to appear in the 19th century.

The Risorgimento was an Italian political and social movement that over the course of the 19th century, led to the consolidation of Italy as a single state, the Kingdom of Italy. The movement can trace its origins to feelings of national solidarity left in the wake of the Napoleonic Wars (1801 - 1815). It was further galvanized by general dissatisfaction with the outcome of the 1814-15 Congress of Vienna, which reorganized Europe after the fall of the French Empire. The unification process was precipitated by the Revolutions of 1848. It saw the rise of revolutionaries and statesmen, among them, Giuseppe Garibaldi (1807 - 1882), one of Italy's 'fathers of the fatherland, along with Camillo Benso (1810 - 1861), Victor Emmanuel II of Italy (1820 - 1878) and Giuseppe Mazzini (1805 - 1872). The Risorgimento is generally considered to have achieved its goals in 1871, when Rome was designated capital of the Kingdom of Italy, although some states did not join the Kingdom of Italy until after World War I (1914 - 1918).

This map is often mistakenly referred to as the 'Balbi Map' due to that figure's name appearing prominently in the titling. Balbi was born in Venice in 1782. He was a well-respected academic and geographer, having taught at the College of San Michele at Murano and the Lyceum of Fermo. His work is considered foundational in the study of hydrographic basins. He is also one of the first to introduce carto-infographics - producing the world's first 'crime maps.' When this map was issued, Balbi was in residence in Vienna, where he served the Emperor as 'Counselor for Geography and Statistics'. It is curious that Civelli dedicates his most monumental work not to a powerful political figure, or national hero, which may have earned him further patronage, but rather to a well-respected but generally obscure academic. One wonders if Civelli worked under Balbi, maintained a friendship, or if Balbi's work silently contributed to this piece? Balbi died in 1848, just 3 years after this map was issued, but he survived long enough to appreciate the honor.

This magnificent map was issued in multiple editions between 1845 and 1861. The present example was published in Milan and is dated 1853. The map was designed by Francesco Valmagini and Giuseppe Civelli (1816 - 1882) under the guidance of the civil engineer Clemente Folchi. It was engraved by Binder, Castelli, Pavesi, and Luigi Zuccoli. The allegorical cartouche, offering a personification of Italia, was drawn by Roberto Focosi and engraved by Guzzi. The whole is dedicated to the Venetian geographer Adriano Balbi (1782 - 1848). Examples of this map appear in Italian auctions from time to time, but are rarely complete and are uncommon outside of Italy. Although we are aware of others privately held in Italy, the OCLC identifies only a single holding - at the British Library, St. Pancras.

Giuseppe Civelli (June 2, 1816 - March 7, 1882) was an Italian publisher, printer, geographer, and engineer active in Milan during the middle part of the 19th century. Civelli was born in Lombardy, Italy, apparently of modest origins. He established a printing house in Milan in 1840. Ten years later, having achieved considerable success with ambitious cartographic publications, he was able to open additional printing houses in Ancona and Turin. When the capital of Italy moved to Florence in 1865, he established a large printing house there to capitalize on government contracts. This process was later replicated in Rome. He died in Florence, but his successors continued to publish under his imprint, Stabilimento Tipografico già C. Civelli well into the 20th century. Learn More...


Francesco Valmagini (1783 - 1865) was a Milanese civil engineer, military topographer, and professor of geography at the Scuola Militare. He was a draftsman at the Milat War Depot in 1811. In the mid-19th century Valmagini was responsible for multiple large scale maps of Italy and Italian regions. Valmagini died in Venice in 1865. Learn More...


Clemente Folchi (November 14, 1780 - September 30, 1868) was a prominent Italian architect and engineer. Folchi was born in Rome. He initially studied mathematics and philosophy, but in 1800, apprenticed in architecture from 1800 under Andrea Vici (1743 - 1817). From 1806 became a member of the Commissione di Pesi e Misure and of the Académie des Lyncéens in Rome (equivalent of the French Académie des Beaux-Arts). In 1819, Barbara Vici the daughter of his teacher, Andrea Vici, became a widow and Folchi promptly married her. He leveraged the Vivi name to establish his own firm, Folchi Vici. In 1845, he oversaw the production of Giuseppe Civelli's enormous map of Italy. Folchi died in Rome at 88 years of age. Learn More...


Roberto Focosi (1806 - 1867) was an Italian painter and draftsman active in Milan in the first half of the 19th century. Focosi was born in Milan and studied from 1819 - 1827 at the Accademia di Belle Arti di Brera. Much of Focosi's work was related to the theater. Learn More...


Luigi Zuccoli (1815 - January 5, 1876) was an Italian painter and engraver. He was born in Milian and mastered painting under Pelagio Palagi (1775 - 1860). He was well regarded as a painter, becoming well known for his domestic scenes - a trope popular in Northern Europe and England. He was laid low by illness and died in Milan in 1876. Learn More...

Good. Dissected and laid on linen. The map itself is in good condition, exhibiting overall toning and a few minor discolorations. The original linen backing, as might be anticipated from a map of this size and age, exhibits brittleness and separations along old fold lines. Where necessary, these have been stabilized on verso. The map could be laid down on fresh linen by our restorers for an additional fee - but for the moment we have decided to maintain the integrity of the old linen.