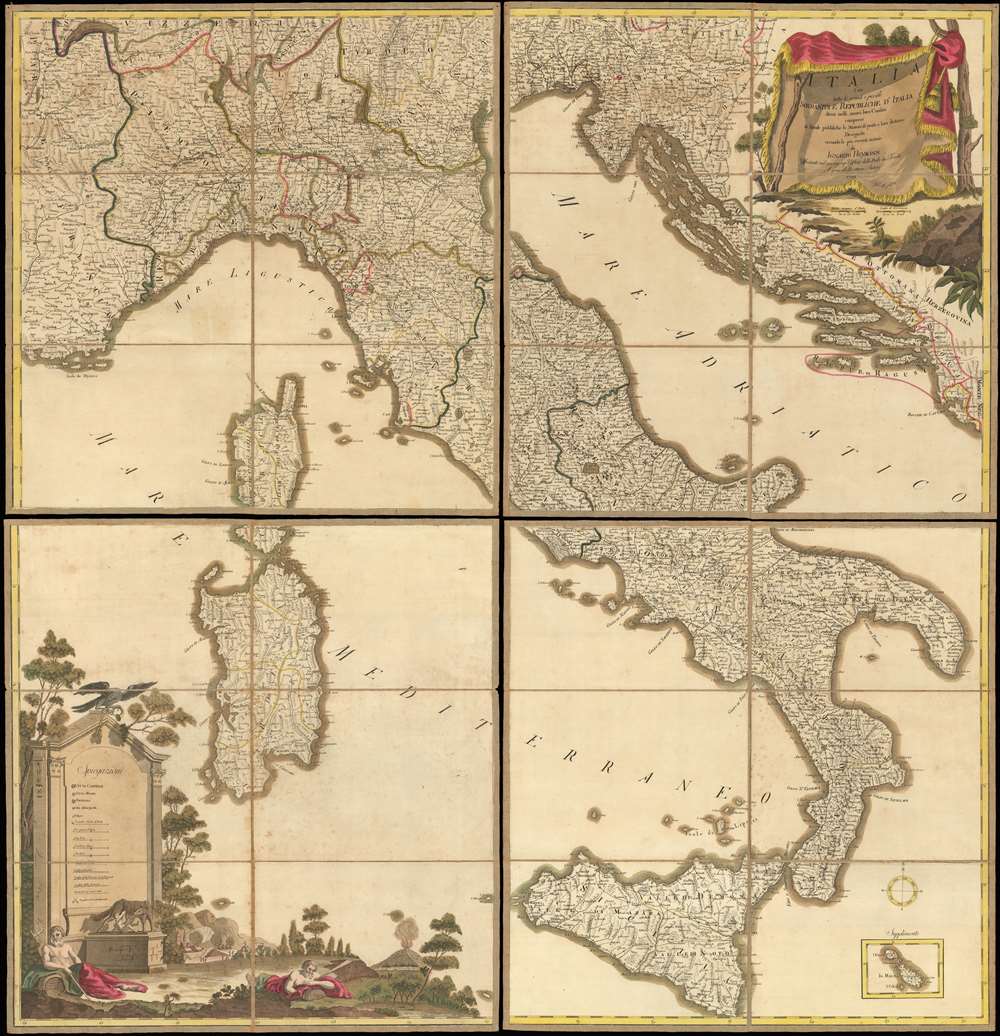 An exquisite large-format map of Italy made during the French Revolutionary Wars.
$2,000.00

A beautifully executed 1799 Ignaz Heymann old-color wall map of Italy sectionalized and laid down on linen. Depicting Italy in full, the map covers from Toulon, France to Montenegro and from Lausanne, Switzerland to Sicily. The map captures Italy at the beginning of the War of the Second Coalition (1799 - 1800), fought between the European monarchies and Revolutionary France. Chronicled here are nearly all the battles of the War of the First Coalition (1792 - 1797), each of which is marked by a pair of crossed swords. Fought around the cities of Lodi, Manua, Mondovì, Codogno, Rovereto, and Bassano, among others, almost all were resounding French victories over the opposing Piedmontese and Austrian armies.

These battlefields are of course only a small portion of what is illustrated here. Countless Italian cities, towns, and villages are identified. The boundaries of the Italian duchies, republics, and other nation-states are denoted by colored lines. Both Corsica and Sardinia are illustrated in detail in the Mediterranean off Italy's west coast, while to Italy's east the Dalmatian coast is exquisitely engraved, with its city-states, republics, and, of course, the Ottoman Empire.

A decorative title cartouche adorns the upper right corner and an inset map of Malta and Gozo appears in the lower right. An extremely decorative key, situated at bottom left, provides a summary of notations employed. Romulus and Remus, as well as allegorical personifications of the Po and Tevere Rivers appear in the foreground, in front of the key. An illustration of an siege encampment appears in the background, possibly referencing the French siege of Mantua.

The War of the First Coalition

Fought between 1792 and 1797, the War of the First Coalition refers to wars fought between the European monarchies and the French First Republic. In the Italian Campaign, the first major battle followed the 1792 French annexation of Nice, which was subsequently lost in mid-1793 when the French army was called to put down a rebellion in Lyon. It late 1793, Nice was then retaken, followed by other victories against the Piedmontese. In 1794, the Committee of Public Safety (the French government during the French Revolution, led by Maximilien de Robespierre) was overthrown, sending the army into chaos. By June of the following year, politics in France had been restored to some normalcy and new campaigns were organized and carried out.

Napoleon Bonaparte was appointed commander-in-chief on March 2, 1796 and immediately began planning campaigns in Italy. He won a string of victories in April at Montenotte, Dego, and Mondovì, forcing Piedmont to sign the Armistice of Cherasco on April 28, knocking the Piedmontese out of the war. It took Napoleon just a month to defeat an enemy that had been fighting the French for the previous three years. Napoleon went on to win even more victories throughout northern Italy against the Austrians, besieging Mantua, and finally forcing the Austrians to sue for peace when his army advanced on Vienna.

This map was created and published by Ignaz Heymann, an Austrian cartographer, and published in 1799. We are aware of two examples in institutional collections at the Bibliothèque nationale de France and the State Library of Württemberg in Stuttgart, Germany. Rare to the market.

Ignaz Heymann (1765-1815) was an Austrian postmaster, publisher, and cartographer active in Italy during late 18th and early 19th century. Heymann was born in Karansebes (modern day Romania). At age 7 he moved with his parents to Milan where, as a young man, he attended the Jesuit College of Brera. In 1874 he traveled throughout Italy, visiting Florence, Rome, Naples, and Venice, finally landing in Gorizia, where he took a job with the local tax regulatory commission. Afterwards he relocated to Trieste where he found work with the Postal Service. The Napoleonic occupation of Trieste in 1809 forced him to move again, this time to Vienna, where he again took work with the postal service. He retired from the postal service in 1811, after 25 years of service. For his distinguished civil service to the Hapsburg Empire he was awarded the Große Goldene Civil-Verdienstmedaille (Great Golden Civil Merit Medal). He published a number of large format maps, most associated with the postal service. His earliest cartographic studies appeared in 1797. Numerous maps followed, most depicting various parts of the Hapsburg Empire and Italy. Heymann died in 1815.