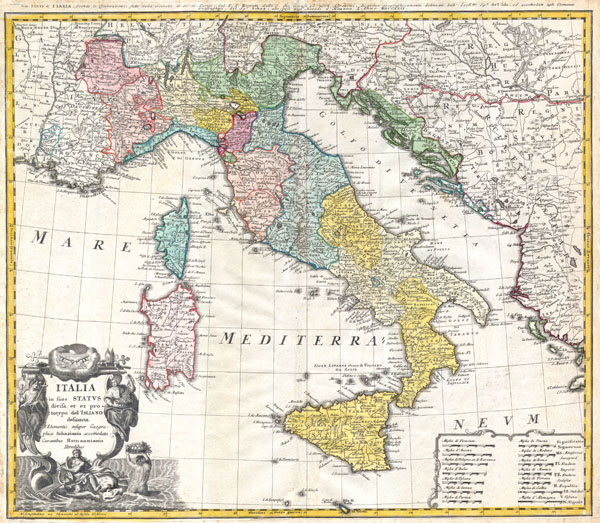 This is a find decorative map of Italy, Sardinia, Corsica and Sicily by the Homann Heirs. Based on the cartography of Guillaume de Lisle with a few updates and revisions. Depicts the peninsula divided up in to various states and duchies. A line of text at the top of the map, just outside of the border, dates the map, 1742. This map was drawn by Johann B. Homann for inclusion the 1752 Homann Heirs Maior Atlas Scholasticus ex Triginta Sex Generalibus et Specialibus…. Most early Homann atlases were 'made to order' or compiled of individual maps at the request of the buyer. However, this rare atlas, composed of 37 maps and charts, was issued as a 'suggested collection' of essential Homann Heirs maps. A fine copy of an important map.

Phillips, Lee Philip, A List of Geographical Atlases in the Library of Congress.
Looking for a high-resolution scan of this?